Clarissa Leung catches up on the pro democracy movement in Hong Kong, and the activists fighting to keep their city free. 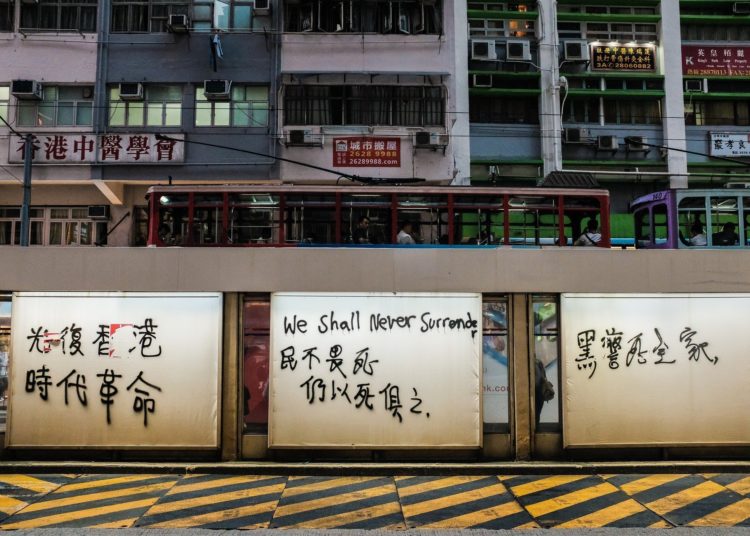 Image by BenPixabay for pixabay

The hashtag #Save12 pervades Hong Kong social media, the local police force launched a hotline for citizens to snitch on anyone who contravenes the new national security law, the city’s pro-democracy lawmakers resigned from its legislature, and the region’s high court has ruled that the police complaints system breached its bill of rights.

Here is an update on the political happenings in Hong Kong since the promulgation of the national security law, and the responses of the international community.

Ever since 23 August this year, the social media campaign #Save12 has gained traction online from both local protesters and international activists, calling for the release of 12 Hong Kong youths, aged 16–30, currently held incommunicado in China.

Reportedly, the 12 pro-democracy activists had been arrested by Chinese authorities and charged with violating the national security law in their asylum-seeking flit to Taiwan. Ten of them had been charged with offences like manufacturing or possessing explosives, arson, rioting and assaulting the police. Among the group was Andy Li, an activist who had been arrested under the new law for “colluding with foreign forces”.

Their families told the media that they were oblivious to the arrest until five days later, and that the 12 youths have been detained in China for over 90 days without access to legal representation or contact with their families. Reportedly, two of the activists had been denied access to medication for chronic conditions such as asthma and depression.

On 12 September, some of the detainees’ relatives called on the Hong Kong government to intervene and guarantee safe return and access to lawyers appointed by families for the 12 detainees. In response, the city’s chief executive, Carrie Lam said at a press conference that the detainees were “running away from legal responsibility”. The family-appointed mainland lawyers representing the 12 reported being “followed, harassed, warned by security officials to drop the case” and were told that the detainees had hired their own attorneys at the Shenzhen detention centre from a government-provided list.

Human rights group Hong Kong Watch has been calling on parliamentarians to apply pressure on their respective governments to ensure the immediate return of the 12 activists to Hong Kong, their access to legal representation organised by their families, contact with their loved ones, and access to prescribed medication and medical treatment.

Meanwhile, around two weeks ago, Hong Kong’s police national security unit launched a hotline for citizens to inform anonymously on anyone they suspect has breached the national security law. Over 1,000 pieces of information were submitted on 5 November alone, the first day of operation, as the system allows tip-offs in formats of video, audio and photos without sharing any personal details. It has been clarified that the intelligence gathered would only be handled by the national security police.

Maya Wang of Human Rights Watch said the hotline “replicat[es] the Chinese Communist party’s model of relying on grassroots informants”. James To, a pro-democracy legislator told RTHK (Radio Television Hong Kong) that it will “undermine the trust between people” since “much of the reports will be related to individuals’ political opinions.”

Commenters on a pro-police Facebook page said they would use the system to tell on people who ate at restaurants which have shown support to the anti-government protests, further deepening Hongkongers’ concerns about political surveillance, which student activist Joshua Wong reciprocated, saying that it:

“Carried disturbing echoes of … the Cultural Revolution of the 1960s and 1970s … [The hotline can be] used for business retaliation, by encouraging citizens snitching on each other and cooking up charges against business competitors, just like what happened during China’s Cultural Revolution”.

Earlier this month, four pro-democracy lawmakers in Hong Kong were ousted and disqualified from running in the next election under the charge of being “unpatriotic”, supporting independence, seeking help from “foreign forces to interfere in the affairs of the region” and endangering national security. Following the four’s expulsion, 15 pro-democracy lawmakers in Hong Kong staged a mass walkout and resigned in an act of protest.

The four men are the leader of the pro-democracy Civic Party and practising barrister Alvin Yeung, founding member of the Civic Party Dennis Kwok, pro-democracy Professionals Guild member Kenneth Leung, and Civic Party member Kwok Ka-ki. Yeung and Dennis Kwok were banned from elections after signing a joint letter calling on US senators for sanctions on Hong Kong. The allegations against Leung and Kwok Ka-ki are more ambiguous; Leung was accused of “indirectly appealing to the US government for sanctions” and officials pointed out that Kwok Ka-ki had a “purported intention to call on foreign powers to sanction Hong Kong”.

Claudia Mo, a pro-democracy lawmaker from Hong Kong, told the BBC, “We owe a display of solidarity with our colleagues who were ousted. We need to protest against what could be the ultimate Beijing crackdown on Hong Kong – to silence the last bit of dissent in the city”.

For now, the pro-Beijing camp dominates Hong Kong’s legislature with all 19 pro-democracy legislators having either resigned or been dismissed from the 70 seats.

On 19 November Hong Kong’s high court ruled that the Hong Kong government breached its bill of rights on protection from torture and cruel treatments with its failure to deliver an independent commission of inquiry into alleged police brutality.

The conduct and reputation of Hong Kong’s police force were first brought into question during the 2014 Umbrella Movement, and it received closer scrutiny as last year’s protests often escalated into violent confrontations. Once known as “Asia’s Finest”, it now faces countless allegations of police brutality, using excessive force and questionable misuse of crowd control tactics.

The case was brought by the Hong Kong Journalists Association after statements from chief executive Carrie Lam saying any complaints system outwith the existing one of the Independent Police Complaints Council (IPCC) would be redundant.

The high court ruled that the IPCC was “inadequate to discharge the government’s obligations under the bill of rights”. Judge Anderson Chow said the police complaints department (Capo) was an “unsegregated part of the police force”, therefore it cannot be considered as independent. The IPCC was practically independent but lacked the powers to investigate and could not overturn Capo’s decisions, according to the Guardian.

Chow also pointed out that the failure of officers to display their ID badges was also inconsistent with the bill of rights by hindering the efficient investigation into allegations of police brutality.

An IPCC report was lambasted as a whitewash by Hongkongers and international activists as it largely cleared officers of any wrongdoing. British academic Professor Clifford Stott quit the IPCC’s panel and said the watchdog lacked the powers to conduct adequate investigations and that international experts’ attempts to improve the council had failed.

US national security adviser Robert O’Brien accused China of “flagrantly [violating]” its international commitments, and threatened sanctions on “those responsible for extinguishing Hong Kong’s freedom”. US Republican senator Marco Rubio and Democrat senator Jeff Merkley said in a statement warning that “there will be consequences for Beijing’s actions”:

“It is critical that the United States and all allies of freedom come together to recognise and condemn the undeniable and far-reaching ramifications of this authoritarian power grab, which has wiped out what little remained of Hong Kong’s democratic political system and violates China’s treaty obligations”.

Australia and Germany also condemned China’s decision to oust Hong Kong legislators as, in the words of Australian foreign affairs minister Marise Payne, it “undermines Hong Kong’s democratic processes and institutions, as well as the high degree of autonomy set out in the Basic Law and Sino-British joint declaration”.

Foreign secretary Dominic Raab’s response on the part of Britain, co-signatory of the UN-registered, legally binding Sino-British Joint Declaration, was that the dismissal of pro-democracy legislators was “a further assault on Hong Kong’s high degree of autonomy and freedoms”. The UK so far has counted three breaches of the joint declaration committed by China, including the introduction of the new national security law.

Canada has made a statement about reviewing and improving its policies regarding Hong Kong youths who wish to apply for Canadian citizenship and student and work visas.

Britain’s minister for Asia, Nigel Adams said, “We will continue to consider designations under our Magnitsky-style sanctions regime”, referring to the US Magnitsky legislation that provides governmental sanctions against foreign individuals who have abused human rights.

The US has imposed sanctions on over ten Hong Kong and mainland Chinese government officials since August this year, including its chief executive Lam, accusing them of threatening Hong Kong’s peace and security by promulgating Beijing’s national security law.

Hong Kong Chief Secretary for Administration Matthew Cheung responded by saying, “We are not going to be intimidated”, calling the sanctions “barbaric … interference”.

The US has also passed the Hong Kong Human Rights and Democracy Act under President Donald Trump’s administration, which is a Magnitsky-style law that allows the US government to impose sanctions against officials suspected of human rights abuses in Hong Kong, and requires the Department of State to conduct an annual review to evaluate whether changes in the city’s political status would justify reshaping its favourable trade relations with the US.

The future for the semi-autonomous city is still holding out in uncharted waters.

“They need a new strategy”, said Dr Ma. “A lot of the past movement focused on elections and getting votes from the public but there are limits to this strategy.”

Despite recurrent threats of action and implementation of concrete sanctions against China for its increased governance of Hong Kong, the odds are against the pro-democracy activists as the central government persistently pushes back against international criticism.

But, Hongkongers remain cynical yet purposeful, which has eventually become their typical outlook on their activism. “It’s not the end [of the fight for democracy] because most people are still in full support of full democracy in Hong Kong”, Dr Ngok Ma of Chinese University of Hong Kong told the BBC.

“It’s okay to lose. We might have lost this battle. But we are looking forward to the end of the war. We may be quitting the legislature at this point of time but we’re not quitting the democracy fight”, said pro-democracy legislator Claudia Mo in her op-ed for Apple Daily prior to her resignation.