Photographers and editors that obtained and published photos of Mrs Hancock broke the Editors Code of Practice as they did not respect her privacy, and harassed her. 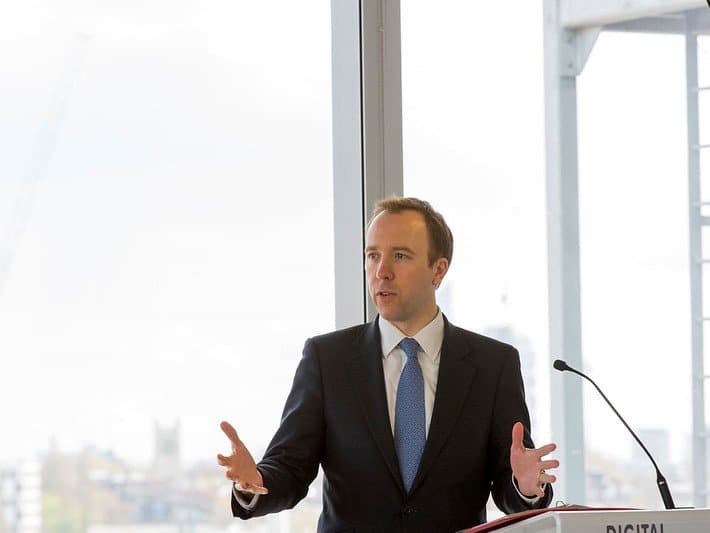 “Blockchain Partnership Event” by gdsteam is licensed under CC BY 2.0

The recent Matt Hancock scandal saw the former health secretary face immense pressure to resign, which he eventually did. Caught on camera in an intimate clinch with a taxpayer-funded aide he had hired while breaking covid measures was always going to damage his political career and be a focus for press attention.

But the press’s treatment of his wife was unjustified and in breach of their code of conduct.

What is the scandal?

The Sun first broke news with the headline that read ‘CHEATING HANCOCK Matt Hancock’s secret affair with aide Gina Coladangelo is exposed after office snogs while Covid raged on’. The article was accompanied by a picture and, later, a video showing the health secretary in a tight embrace and locking lips with Coladangelo.

The paper highlighted the fact that the health secretary who was adamant about the need to maintain strict social distancing to bring down covid infections and deaths, had been secretly breaking these measures.

Coladangelo, had been hired by Hancock as a non-executive director at the Department for Health and Social Care (DHSC), funded by the taxpayers to the tune of £15,000 and sat on the department’s oversight board.

She has since resigned.

When the new broke it was not just Hancock and his aide who received media attention, Mrs Hancock was also thrust into the public eye.

Although married for 15 years and with three young children, she had led a private life and kept a low profile. Nonetheless, the press delved into her personal and private life, drawing public attention to her.

One article by the Daily Mail described her as Hancock’s “humiliated” wife noting that she was still wearing her wedding ring while she was outside her home walking with her dog and son. An article by the Daily Star features the same pictures but describes Mrs Hancock as putting on a ‘’brave face’’.

The way in which journalists have examined and exposed her personal life has not drawn much censure in the press but has been critised by the public especially regarding how the pictures were obtained.

Photographers ‘door stepped’ her, crowding together outside her house, ready to capture a shot of her upset or distraught.

IPSO and the Editors Code of Practice

In the UK the main press regulator is the Independent Press Standards Organisation (IPSO) created in 2014 following the closure of the previous regulator the Press complaint Commission (PPC).

While new regulators have come into existence such as IMPRESS, the majority of publications fall under IPSO and both their editors and journalists must abide by the Editors Code of Practice. The regulator oversees and passes judgement on complaints against the press and may impose a fine if it rules that the code has been broken.

The conduct of some photographers and editors in obtaining and publishing pictures of Mrs Hancock have ignored or broken certain articles within the code.

The code states in Article 2 that:

“Everyone is entitled to respect for their private and family life, home, physical and mental health, and correspondence, including digital communications”.

While there is a reasonable expectation that the press might take pictures of her in public during a walk, ‘door stepping’ breaks the code by infringing her privacy, family life and home.

It not only breaches her privacy but is also an act of harassment. Article 3 states:

“Journalists must not engage in intimidation, harassment or persistent pursuit”.

Drawing attention from her neighbours and the wider public by camping outside her family home is intimidating for Mrs Hancock and her children.

To pursue Mrs Hancock on her walk, taking photos of her face up close to capture emotion is intimidation and harassment.

Matt Hancock broke the news of his affair and the end of the marriage the night before the scandal broke. Article 4 of the editors’ code states:

“In cases involving personal grief or shock, enquiries and approaches must be made with sympathy and discretion and publication handled sensitively”.

The press did not approach the matter with any discretion or sensitivity.

They published articles and photos of her, her life story, and descriptions of her character and demeanour. These will be read and shared by the wider public, and her image will be forever featured online, a constant reminder of her failed marriage and cheating husband.

The Code of Practice does provide the defence of public interest that can override articles of the code, including articles 2 and 3. The public interest defence exists to protect the press in cases of:

The public interest defence criteria supports press coverage of Matt Hancock’s behaviour, but this does not extend to his wife who has played no public role or sought a public presence, preferring to keep a low profile and her family life private.

This does not justify the press invading her privacy.

The conduct and behaviour of journalists in breaking guidance and rules should not be overlooked. The press should be held to account for the hurt and damage caused by their unnecessarily, intrusive, and intimidating behaviour.