The Scottish Greens’ grown-up approach to negotiation with the SNP – along with their early results - show they are ready for government, writes Matt KiIleya 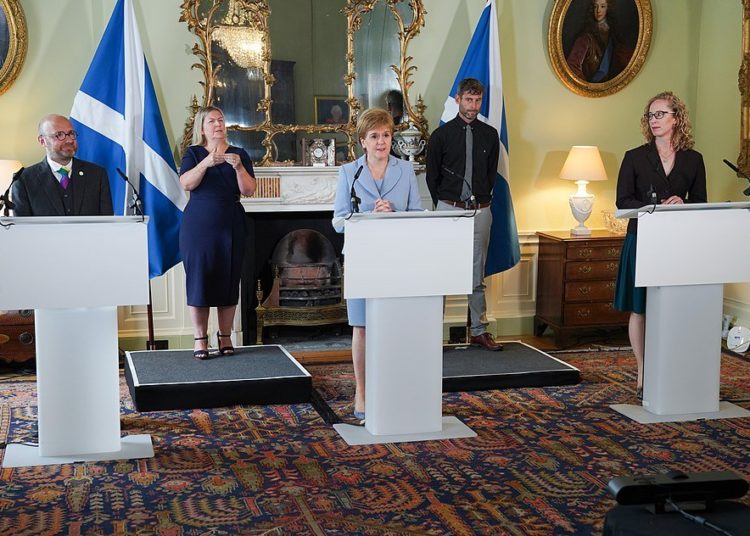 Following local elections earlier this year in Sheffield, the Green Party formed a coalition with Labour. The agreement was undoubtedly historic with the Greens taking up executive positions on the council of England’s fourth largest city for the first time. It has been surpassed by events north of the border in Scotland.

SNP and Green Party strike a deal at Holyrood

It’s an oft-heard trope that Westminster politicians are corrupt, act on behalf of a small elite and don’t act in the interests of citizens far beyond the capital. In Scotland, it’s a view that has helped the Scottish National Party (SNP) build support and cement itself as the dominant political force in Scotland in the years since Scottish devolution.

A frustration with Westminster is something the SNP shares with the Scottish Greens. The Greens’ primary focus – though not their sole focus – is of course to deal with the climate crisis.

The lack of leadership on this issue from Westminster in recent years has led them to conclude that, in order to make the changes necessary to deal with the climate crisis, Scotland needs to govern itself. The party has always been committed to decentralisation, but the strength of this feeling saw the party finally back Scottish independence in the 2014 referendum.

Fast forward to the 2021 and Scottish independence is firmly on the agenda. In the Scottish parliament elections earlier this year, the Greens once again backed it, with a manifesto commitment to hold a second referendum. Their membership swelled and, in a record election turnout, they recorded their best-ever election performance.

Negotiating the deal in Scotland

With no majority winner in the 2021 elections, the Greens and SNP have found enough common ground to announce a power-sharing deal that will see the Greens place ministers inside government for the first time in the UK. Independence, it turns out, is not the only issue the two parties agree on.

The deal was ratified overwhelmingly by members of both parties this past weekend: 95 percent of SNP votes cast were in favour and 83 percent of Greens were in favour with a small number of proxy votes left to count.

Some of that extra time enabled both parties to engage regularly with their membership. In the case of the Greens, they set up a membership steering group, which received weekly updates throughout and daily updates in the final stages. It kept them true to their membership and – despite a small number of dissenting voices – meant that ratification was a formality. It also means the start of their working relationship in parliament should be a smooth one.

Contrast this with the Conservative-Lib Dem coalition at Westminster

It’s all quite a contrast to the negotiations of the UK’s Conservative-Lib Dem coalition government in Westminster back in 2010. Back then, it took just five days with small negotiating teams from both sides running frantically around Whitehall to the delight of TV news cameras. There was limited time for involvement of party members, which led to a tetchy ratification and some high-profile rebellions from their own MPs. Instinctive revulsion from the Lib Dems’ centre-left voters registered as a huge slump in the polls within weeks, which never recovered.

Five years later, the Lib Dems entered the electoral wilderness as 49 of their MPs lost their jobs, leaving them with just eight. Their narrative that they had taken the edge off the worst excesses of their Conservative partners simply didn’t cut through at the ballot box. There is of course an inherent danger of being a minority partner in a coalition and the Greens will have to stay attuned to this.

The abandonment of core policies such as scrapping tuition fees was another factor – something that the Scottish Greens are hardly likely to do.

Some strong wins for the Greens

On that core issue of climate, the Greens have secured some strong wins in the cooperation agreement. The promise of £5bn to decarbonise Scotland’s railway network, and 10 percent of the entire transport budget dedicated to promoting active travel such as walking and cycling. Plus, a £500m ‘just transition’ fund to target the northeast of Scotland and a huge expansion of onshore wind capacity.

The new deal for tenants is another exciting policy win, offering greater protections from eviction and increased rights around decorating their homes and keeping pets. It’s the kind of progressive policy that would make Labour and left-leaning voters south of the border blush.

What about North Sea oil and gas?

A trickier area for the two parties is North Sea oil and gas. The SNP has a strong historical association with fossil fuels. Here too the Greens have secured results. It’s not quite the commitment to end all new oil and gas exploration, but instead a promise of a review of how the activity aligns with the Paris climate agreement.

SNP’s leader Nicola Sturgeon has also shown movement in the proposed Cambo oil fields off Shetland. Recently she stated for the first time that there are “significant questions” whether it should continue in light of climate considerations. The Greens are unequivocally against but, either way, the powers to make that decision remain firmly reserved by Westminster.

It’s another clever aspect of the Greens’ strategy that they have focused more on what is possible through the devolved powers the Scottish government has. Why argue openly with the SNP on Cambo, they have reasoned, when the decision is not in either of their hands?

North Sea Oil could rear its head again in the future if, as both parties hope, the country votes for independence. With flexibility built into the deal for each party to lay out a separate case for what independence should look like, the SNP may be tempted to revert to oil and gas to make the sums stack up.

Extracting statements now such as Sturgeon’s on Cambo is the Greens’ insurance policy here. Either way, in the long run the basin is a declining one and has been for some time. Scotland’s direction of travel will increasingly be its growing sectors such as technology and renewables and therefore any tension should dissipate.

The benefits outweigh the risks

All that said, there are risks for the Greens in going into government. Coalitions can be tricky as can referendums. They will need to remain focused on continuing the cooperation and considered open dialogue to avoid the mire that has befallen Westminster in the five years following the EU referendum.

It seems that – with their members backing – they have determined that what they can achieve merits them taking the risk. Moreover, the climate emergency means they cannot afford to not to take the risk. These next five years will be critical for climate change – being punished at the next election will be the least of the Greens’ concerns. In many ways, they have nothing to lose.

Now they will take their seats in government as the rest of us watch with interest.

Matt is a Labour Party activist based in Sheffield. His interests include politics, climate change and science and he has regularly written freelance contributions on these topics. He worked in financial services for a number of years and holds a PhD in statistics.