Apparently, 43 of the 128 accounts used pictures of actual NHS staff. O’Connell managed to contact seven, all of whom confirmed their identities were being used without consent. 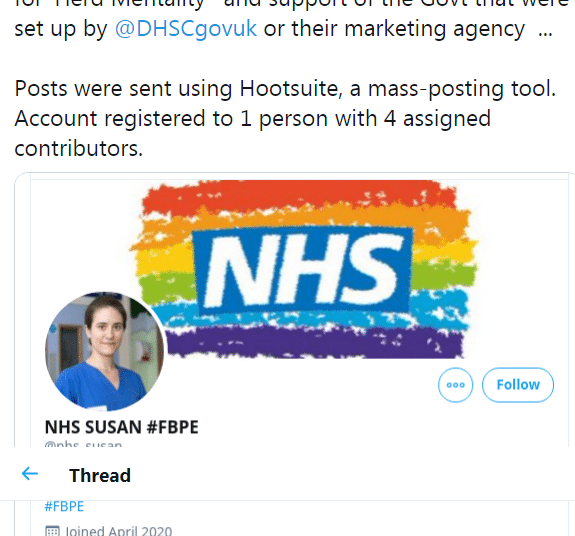 There is something odd going on in West Hertfordshire NHS.  Last Friday someone named John O’Connell tweeted asking @WestHertsNHS if they could confirm a nurse on Twitter @NHS_Susan was actually a creation of the DHSC Communications Team, and not in fact, one of their staff.

Susan’s account no longer exists by the way. West Herts NHS said on Twitter that they reported this ‘fake account’ as soon as they were made aware of it and, “It has now been shut down”.

The strange thing is that the profile image ‘Susan’ used in the original tweet appears to have come from the UNISON website HERE where her badge reveals her real name as Mia but her Twitter account handle is @NHS_Susan and she tweets as NHS Susan #FBPE.  The namebadge on her Twitter picture is cropped out.  All very odd.

Other sites are now reporting that Mia is a 29-year-old paediatric nurse, who came to the UK from Greece in 2016.

O’Connell claims this was just one of at least 128 Twitter accounts registered to one person that were tweeting pro-government messages. Originally these accounts sent messages in support of herd immunity (before the lockdown was announced), but later they began tweeting to get restrictions lifted as quickly as possible.

O’Connell then contacted the Department of Health and Social Care (DHSC) and later tweeted that,

“Despite the @DHSCgovuk reply to my queries of ‘no comment’ (and that’s all she wrote), that person is a contracted Government employee temporarily assigned to this department.”

At this stage, Yorkshire Bylines has no way of knowing if any of these claims are true since the tweets are no longer available. But we’re investigating further.

Yesterday at 5:03 pm O’Connell tweeted again with a long thread about the accounts, now all mysteriously taken down ‘simultaneously’ by the (totally unrelated, individual) account holders. He claims all these account were creations of the DHSC or their marketing agency.

Note, herd ‘mentality’ is a typo I think, it should perhaps be ‘immunity’. The accounts were all linked back via a mass posting tool to a single person whom he alleges is a “contracted Government employee temporarily assigned to [the DHSC] department“

Apparently, 43 of the 128 accounts used pictures of actual NHS staff. O’Connell managed to contact seven, all of whom confirmed their identities were being used without consent.

“The accounts have now mostly gone, not suspended by Twitter but deleted by the account holder(s) in one simultaneous mass cull a few days ago … At the click of a button. Which itself, goes to prove the singular control of all the accounts.”

If this is true, and it’s a very big if at the moment, it has the potential to become a significant story indeed. The DHSC categorical denial is here:

Covid-19 A new podcast by Hannah Fry, the presenter of BBC4’s programme Contagion: the BBC4 Pandemic.

Covid-19 A new podcast by Hannah Fry, the presenter of BBC4’s programme Contagion: the BBC4 Pandemic.