Andy Brown looks at the ideological confusion in the Conservatives, as their rebellions make the country vulnerable to coronavirus and Brexit. 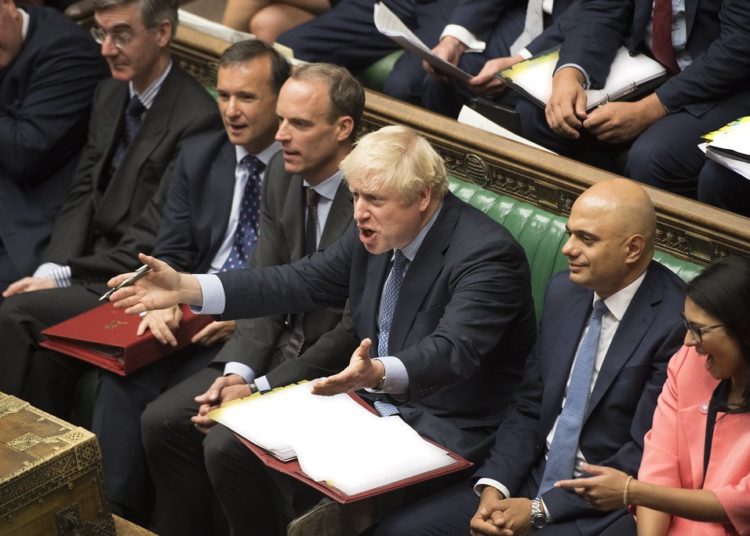 There is a first time for everything. So I shouldn’t be so surprised to find that for the first time in this entire pandemic Boris Johnson seems to be following a half-way sensible policy. With several vaccines on the verge of roll out, and with hospitals constantly learning more about how to treat the disease, now is not the time to give in to pressure from panicky backbenchers and ease up on restrictions too quickly.

It might be possible to quibble with Johnson about which tier any particular region is put in. It is pretty easy to point out strange contrasts between what we are allowed to do and what we aren’t, when 2,000 people can arrive at a football match, but a couple can’t visit both of their parents.

It is certainly sensible to ask questions about how support has been targeted and why businesses in the North have been hung out to dry for quite so long. And we should ask why the self-employed have been shafted by a Conservative Party that likes to think of itself as their natural representatives.

Yet on the whole, there is a lot of logic behind trying to keep strong restrictions in place for a few more weeks. There is no kindness in letting people go out for a Christmas drink at the risk that they then come home and kill their own granny. Last time Johnson eased restrictions too quickly people died and businesses were forced back into closure.

Mind you it took him long enough to stop being quite so careless quite so often. Few countries in the world had the luxury of quite as much warning of the initial arrival of the pandemic as Britain did. Yet Johnson squandered that time and locked down too late and too ineptly. Being an island nation should have made it relatively easy for the UK to control its borders and restrict the arrival of fresh infections. Yet Johnson insisted on keeping airports open throughout the early stages of the pandemic and letting over a million people fly into the country unchecked and unquarantined before he finally imposed some restrictions.

You remember those early months. They were the ones when we were all wrongly told there was no point in wearing a facemask. That was the time when the prime minister ignored his own advice and shook hands with covid patients, so recklessly that he nearly killed himself – before his closest adviser ignored the rules and tested his eyesight on a drive to Barnard Castle.

And you remember the months when over-priced contracts were being clumsily handed out to any dodgy private company who knew a government minister, while NHS and local government quietly and effectively got on with doing a fantastic job. The result of that phase of Johnson’s management was that the UK ended it with the 3rd highest death toll in the entire world.

What followed was even worse.

Over the summer, when infection rates slowed, many of us predicted that the virus would return and begged the government to put in place effective door-to-door contact tracing systems that would actually make sure that people were isolating. Instead of doing that, Johnson kept insisting that his world-class incredibly expensive privatised test and tracing phone app would work, when it so obviously didn’t, while busily agreeing with one of his silliest back benchers that it was our patriotic duty to go to the pub.

He incentivised going out to eat.

And most incredibly of all, he decided that it was fine for people to travel for pleasure on foreign holidays in the middle of a pandemic. Going through crowded airport lounges, sitting on sweaty planes, mixing with people who have travelled from across the world and then coming back home with little more than an advice leaflet is not the ideal way to control the spread of a global pandemic.

The irresponsible policies that were adopted over the summer are the prime reason why businesses are suffering now. It would have been far better to have devised proper schemes to pay airline workers to stay at home than to have another economically harmful lockdown when people brought a fresh wave of infection home.

The summer would have been the time to start a genuine programme of investment in long-term change, rather than spend months dithering and then allocating huge amounts of money on new road schemes. The summer would also have been the time to have launched a massive national retraining programme, to help people move from industries that will have to be smaller after covid and into new jobs.

Incredibly, the government still hasn’t even got a plan to start retraining airport workers, months after the need became obvious. Weeks were wasted in which useful work could have been done on supporting the self-employed and making sure that no one was left helpless in the face of economic misfortunes that weren’t of their own cause. Instead, it was left to Caroline Lucas of the Greens to stand up constantly for three million self-employed workers and to be constantly ignored and sidelined for her trouble.

During all of that time, Johnson’s backbenchers stayed loyal and trooped through the lobbies to back his clumsy mishandling of the most serious national problem since the rise of Hitler. When he finally got round to doing something reasonably sensible, over 60 Conservative MPs rebelled against his policies and plenty more threatened to do so. Many of the MPs who are telling us that he should ease off for Christmas, are the same people who kept quiet or backed him when Johnson called off Eid celebrations the very night before they were due to take place.

And these are the same people who cheered on their leader throughout his chaotic organisation of the first real impacts of Brexit. With under a month to go, businesses up and down the country have no idea of what rules they are following. But the party that wants us all to see it as the ‘friend of business’ ignores their plight, because it conflicts with their extremist ideology to admit that there might be a problem. The UK has a whole series of MPs in power who appear to believe that we mustn’t harm the economy by preventing people from being killed but we must harm the economy by sticking to Brexit deadlines.

There may be a first time for everything. But let us hope this is the last time we encounter such a staggering piece of inconsistency from these MPs. Somehow, I doubt it.