The attempt to extradite Assange to the United States was rejected in January, but bail was refused and he continues to be held in Belmarsh prison pending an appeal. It is the third birthday he has spent in the high-security prison in south east London. 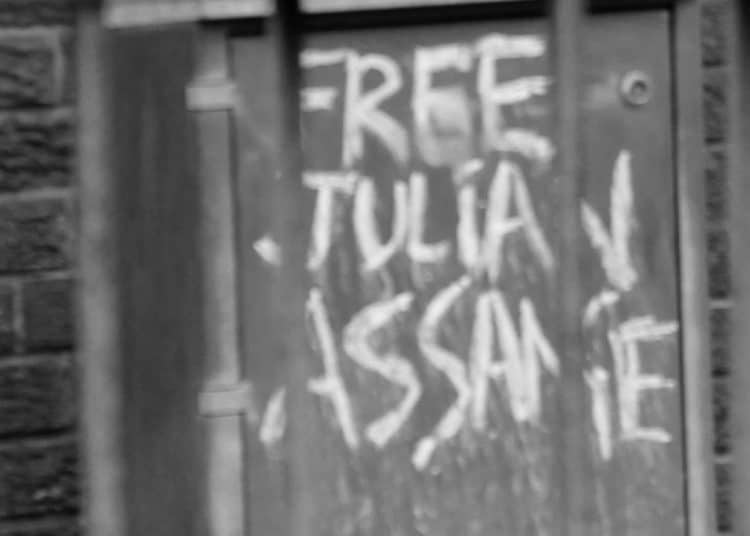 Saturday 3 July was WikiLeaks founder Julian Assange’s 50th birthday, but he did not have much to celebrate. The attempt to extradite Assange to the United States was rejected in January, but bail was refused and he continues to be held in Belmarsh prison pending an appeal. It is the third birthday he has spent in the high-security prison in south east London.

To mark the day there was a giant picnic blanket in London’s Parliament Square stencilled with a Free Assange slogan. Julian’s partner and mother of their two children, Stella Moris, cut a birthday cake. She has asked the authorities in Belmarsh if the couple can get married and hopes Assange will be granted permission to get married outside the prison.

Among the campaigners joining the party was fashion designer Dame Vivienne Westwood. A long-time supporter of Assange, she has called the case against Julian a “stitch-up” and declared: “It’s not a crime to tell the truth”.

Earlier his supporters sailed on the Thames past the Palace of Westminster and the US Embassy in Nine Elms as part of a growing campaign to free him.

The appeal to free Julian Assange

Recently a number of Australian politicians appealed to the US government to drop its Espionage Act charges against Assange, who is an Australian citizen.

The MPs and Senators urged President Joe Biden to take the “opportunity for urgent reconsideration”, following the UK court’s January decision to deny the US extradition request.

On 7 July, the High Court announced that it had given the US government limited permission to appeal the January decision that Julian Assange should not be extradited. According to his legal team ‘limited grounds’ means  allowing only “narrow, technical grounds”. Details of the ruling are still being studied.

On 29 June, a cross party group of MPs led by Leeds MP Richard Burgon handed a letter to the governor of Belmarsh prison requesting permission for a meeting with the WikiLeaks founder.

It was signed by 20 parliamentarians and members of the House of Lords. They believe that the Assange case has huge implications for press freedom in the UK and for the US-UK extradition treaty and that it is in the public interest that UK parliamentarians are able to discuss these issues with Julian Assange.

Meanwhile no date has yet been given for the appeal to be heard against the court’s decision not to extradite him to the United States.

The US is proceeding with the appeal despite the discrediting of the prosecution case as a frame-up, including a recent admission by a key US witness that he provided fabricated evidence for the indictment against Assange.

Assange has not been convicted of any crime in the United States and pending the conclusion of his case it is not unreasonable to release him on bail, require him to surrender his passport and allow him to live with his partner and their two young children.