Jack Peat writes about Labour's recent misfortunes and discusses how the party needs to relate with both small town citizens and big city workers, while also working from the ground-up. In terms of Brexit, Sir Keir Starmer must stop ignoring the issue and confront it face-on. 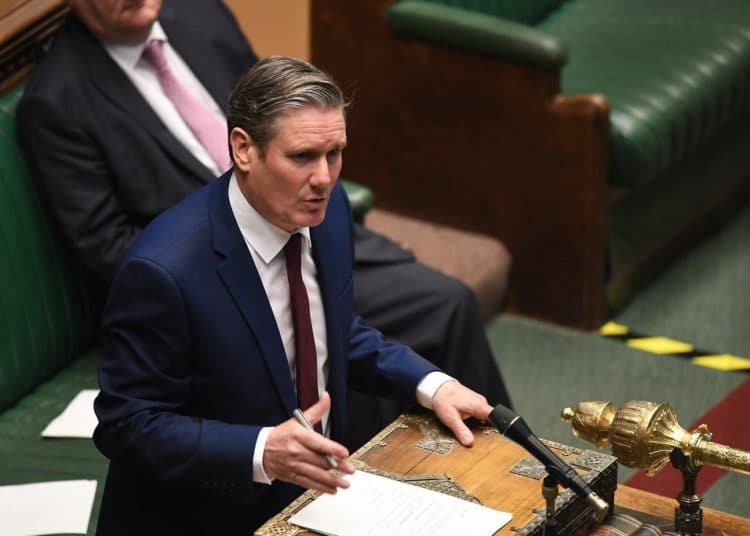 “First virtual PMQs and Ministerial statement on Coronavirus 22/04/2020” by UK Parliament is licensed under CC BY-NC 2.0

Jack Peat is a business, politics and economics reporter and the founder and editor of The London Economic. He has previously worked with SWNS and has contributed to VICE, Independent and Huffington Post.

Following a mauling for both parties in the local and general elections over the past two years, Britain, like many countries across the Western world, is seeing its political centre and centre left marginalised at a dramatic rate.

Hartlepool elected a Conservative MP for the first time in 62 years earlier this month while Labour also lost overall control of County Durham for the first time since 1925. The former mining towns of Workington and Bolsover have turned blue and even Blair’s former constituency of Sedgefield is no longer in his former party’s hands.

Finding reporters willing to point this fact out is like shooting fish in a barrel.

Paul Mason writes that the task ahead couldn’t be clearer, Labour must “construct an election-winning alliance from two demographics: the small-town workers and the big-city salariat”, while Philip Collins points out that “politics has shifted on its axis and the Labour Party does not know what to do about it”.

He adds: “Where once voting was largely an aspect of class and occupational solidarity, now it has become an expression of cultural attitude. The gateway drug was Brexit, which has made political affiliation unrecognisable to politicians schooled on industrial politics, representing a party whose name harks back to the time when labour versus capital was a serviceable description of the contest.”

Both are astute takes, but as Johnny Vaughan of Radio X says on his weekly segment, “we want your solutions not problems”. As such, I’ve looked at five things Labour should consider if it is to reverse its fortunes.

“Just look at him: a chubby, permanently disheveled toff with an accent that comes off as a parody of an upper-class twit, topped off by that trademark mop of silver-blond hair he deliberately musses up before venturing into the public eye.”

But people love him. Whether it be as the mayor of London or the prime minister of the United Kingdom there is no denying that Johnson’s personality has a lot to do with this popularity. He is relatable, aspirational and seems pretty harmless on the face of it. As far as leaders go, what more could you want?

Sir Keir, on the other hand, is anything but.

He is sensible, sure, but is he relatable? Affable? Even likeable? Not so much.

Thankfully, this is the one that the Labour boffins already know. Earlier this week, Piers Morgan confirmed that Starmer is to appear on Life Stories, while rumours shared on social media indicate a ‘fly on the wall’ type documentary could have been commissioned by the party, tracking his leadership.

In it, he must demonstrate not why he is competent but why people should warm to him, in much the same way many have clearly warmed to Johnson. If he manages that, the competence bit could give him the upper hand over our bumbling buffoon of a prime minister.

Ground -up: reconnecting with communities

Shortly after Labour’s hammering in the local elections I argued that the key to the rebuild is to look at the places where the party won, rather than lost – the successes, rather than the failures.

What I meant by it is that Labour needs to rebuild from the ground up. It needs to reconnect with communities and place them at the heart of the party’s reconstruction.

Take Preston, for example. While other seats in traditional Labour strongholds fell to the Tories, the local council in the north-west city remained stoically red thanks to a new model that has turned the struggling city into the “most improved in the UK”.

Paul Dennett in Salford has followed a similar model and was also re-elected this time around. His affordable housing schemes, green initiatives and overhaul of public procurement policy should be turning heads at a national level.

One of the fascinating aspects of the Conservatives’ popularity throughout the pandemic has been that, in the most part, people seem to laud them for the policies that are inherently socialist in nature.

As T J Coles wrote in the London Economic, it took a crisis to get us to appreciate socialism, which must be maddening for Starmer who is trying to fight battles with the enemy’s tanks parked on his own lawn.

But here’s the rub. In order to win back those ideals, Labour must come up with fresh ideas. They must be radical, not sensible (credit: T Blair), and demonstrate how new policies supporting a green economic revolution, for example, could improve the livelihoods of voters.

Doing so would set them apart, which in my view is far preferable to the current practice of aping the centre right.

Make Brexit the stick, not the carrot

Love it or loathe it, there is no escaping the B word for Labour, and avoiding it could cause more damage than it does good.

But last I heard, things weren’t going all that smoothly on the Brexit front. New trading and travel rules are causing major disruption, Lord Frost seems to be uneasy with his own agreements and the government is even looking for an adviser to seek out post-Brexit opportunities, five years on from the referendum.

Giving the Tories a kicking over their economic incompetence is a new one for Labour, but it could prove fruitful. News that UK farmers could be sold down the river in exchange for a free trade agreement with Australia and New Zealand could also upset those traditionally affiliated with the party.

Perhaps David Lammy wasn’t joking when he suggested Labour could go after the Blue Wall!

Finally, and as per my last time out on these pages, Labour should probably accept that going it alone doesn’t offer a realistic route back into power for them.

It has lost Scotland and it has lost the North, but it still brings with it the might of Britain’s metropolis, and that puts its hand on the tiller even if it isn’t in charge of the crew.

A coalition with the Liberals and Greens could net Labour some 351 seats in the next election, according to analysis, which makes it very much a proposition worth considering.