Alex Toal links past with present as Eric Pickles is brought back into the public spotlight over the Greensill scandal. 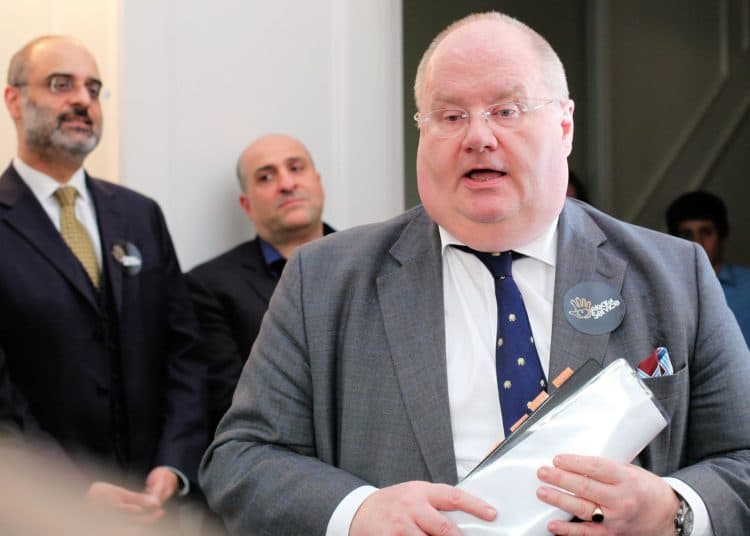 “Eric Pickles speaking to volunteers” by Ministry of Housing, Communities and Local Government is licensed under CC BY-NC-ND 2.0

David Cameron is not the only coalition-era figure to be brought back into the spotlight over the Greensill scandal. Former secretary of state for communities and local government, Eric (now Lord) Pickles, has been chairing the advisory committee on business appointments (ACoBA) since April 2020. Before then he was the government’s anti-corruption champion under Cameron and Theresa May.

In the wake of the scandal, Pickles has expressed outrage that there are “no boundaries at all” between the public and private sector, and has demanded that a register of interests be created for civil servants. During an interview with iNews, Pickles called for:

The word, transparent, is a key one. It not only shows why we have learned no lessons from the expenses scandal of 2009, but the role of people like Pickles in enabling Greensill.

Not to get too nerdy here (I promise), but there’s a key distinction within academia on governance between transparency and accountability. In the aftermath of the expenses scandal, the Conservatives under David Cameron promised to deliver “transparent and accountable” government.

Often, these two were treated as the same thing, but they are in fact subtly different. Transparency entails making information publicly available, whereas accountability enables this information to be acted upon.

Generally speaking, it’s easy for these agendas to fall along political lines. Figures on the economic left are quick to call for more regulation to ensure accountability, whereas proponents of the free market are likely to favour the free flow of information, to let consumers (or in this case voters) make free choices.

This is why, under the Blair government, the amount of money going to non-departmental public bodies like regulators more than doubled. It was under this context that the expenses scandal broke. Information was revealed for the first time about the expenses MPs were claiming. From then, the independent parliamentary standards agency was created to regulate MPs’ pay and expenses: these are now regularly published.

The bonfire of the quangos

However, the reforms delivered under the coalition sacrificed accountability on the altar of transparency. Thanks to Cameron, we have more minutes available from government meetings, and it is easier to access meetings of public officials. And this was also done at the expense of accountability. Cameron’s government performed a “bonfire of the quangos”, cutting hundreds of non-governmental organisations, including regulators.

Eric Pickles was one of the chief acolytes on this war on accountability. In particularly, he was an advocate of axing the Audit Commission, which reviewed local government finances. In a 2011 speech to the Local Government Association he boasted:

“We are dismantling the command and control apparatus of the Whitehall state. Comprehensive Area Assessment is gone. In turn, the Audit Commission will follow … The Government Offices for the Regions have closed their doors. The Regional Strategies and a whole tier of regional bureaucracy are going too.”

This was all in the name of “Big Society”, replacing the oversight of unelected bureaucrats with citizen auditors.

Scholars Laurence Ferry and Peter Murphy sum up the coalition’s achievements when they say:

“In effect, the transparency agenda in England forms a mere apologia and is an inadequate substitute for the level and sophistication of accountability that can be afforded by independent professional auditors assessing.”

The consequences of the transparency agenda for Greensill

The consequences of this are seen in the Greensill scandal. It’s a good thing that the public know that the chancellor and health secretary were lobbied by their former boss, but there’s no sign that there are going to be any actual consequences for this. Between the media, the public, and the political class, we have all failed in our job as citizen auditors.

This is no clearer than in the case of MPs’ second jobs. These are regulated by Pickles’ committee, ACoBA. A frequent phrase in the register of parliamentary interests is “I consulted ACoBA about this appointment”.

Either, as the public accounts committee commented, ACoBA is a “toothless regulator”. Or Pickles is failing in his job to ensure accountability in the public realm.

Time for some accountability

Pickles’ new proposal, to create a register of interests for civil servants, would enable further transparency. But when this government is happy to hand out contracts to associates, break the ministerial code, and waste billions in public money, without so much as issuing an apology, do we really think that more transparency is really the answer?

Perhaps he should push for his own ability to actually do something in ACoBA, rather than continue to bang his head against the brick wall of transparency.