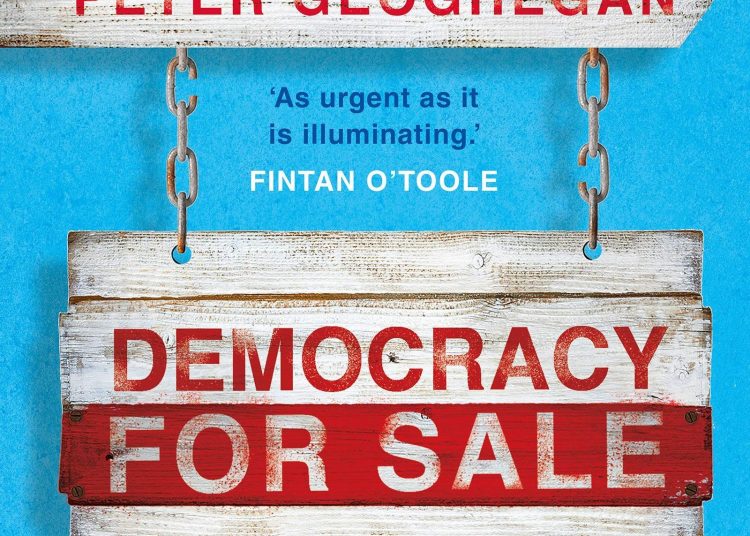 The cover of Peter Geoghegan's new book: 'Democracy for Sale'

The author, investigations editor for Open Democracy, demonstrates his talent for penetrative research in Democracy for Sale. On occasions going undercover, Geoghegan has recorded some of the villains of this story as they unbutton themselves and boast about ‘gaming’ our political system. The book ranges wide, is well structured and accessible. It is also frightening.

Much of the focus is on ‘The Bad Boys of Brexit’ and how a ruthlessly determined group effected a constitutional coup in the UK. But the subversion of democracy did not start in the UK. A coterie of the rich, powerful and right-wing in the US have made common cause with ‘the Brexit Bad Boys’ and the European Research Group (ERG) within the Conservative party. Hence chapter 6 describes ‘The Atlantic Bridge to Global Britain’.

Investigative work by Carole Cadwalladr and others has highlighted the part the digital revolution has had in undermining our democracy, unprotected by the Representation of the People Act 1983 – now out of date for the modern age. Geoghegan’s chapter 9 (‘Digital Gangsters’) covers this topic in forensic detail.

From time to time in Democracy for Sale Old Etonians appear, and consistently on the side of those opposing, in a shadowy fashion, progressive values and democracy.

Crispin Odey is not an Old Etonian (Harrow and Christchurch Oxford), but he has strong connections with the Conservative Party and is a big donor. Geoghegan reports (p145) that Odey, a hedge fund manager, “made £220 million on referendum night betting that sterling would collapse if Leave won”; a union-flag waving Tory selling sterling short and jeopardising the stability of the country’s financial systems for profit.

Although Geoghegan does not make specific reference to this, it is clear that it has been (mostly) men who have been the primary actors.

An earlier reviewer of the book, Anne Applebaum, described it as: “a brilliant description of the dark underbelly of modern democracy: dark money, influence games and the new tactics of the new far-right”. She is right and we should be angry democracy has been subverted in this way.

I had hoped that the last chapter of the book would cheer me up by suggesting ways by which we might get democracy back into shape. The author does flag up some potential reforms that include greatly increasing the level of fines for political malfeasance, wider powers and more resources for the Electoral Commission, and establishing controls over the Wild West that is online campaigning. But we are starting from a near-impossible position.

As Will Moy of Full Fact puts it (p292), “The biggest source of disinformation is the governing party, and they are the ones charged with changing the law”.

If you read Democracy for Sale and feel compelled to do something, then you might choose next to access #Putney by the philosopher A C Grayling. Grayling suggests actions that the citizenry might take – things that will have more political impact than watching daytime television or gardening.  He gives a call to arms.