Curtailing our fundamental right to protest is a threat to democracy

This week the government set out its plans for new police powers that will limit the ability to take part in peaceful protests the latest in a series of actions that the government has taken to reduce the rights of British citizens. 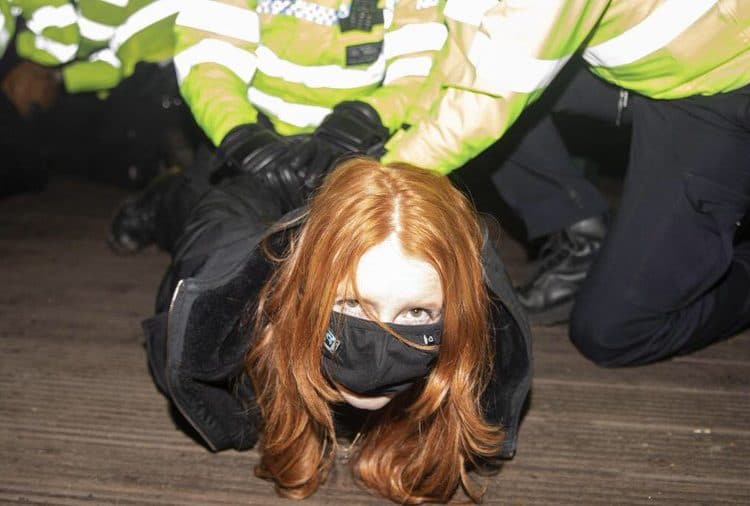 Editor’s note: this article was written before the events at the Sarah Everard Vigil in Clapham on 13 March 2021.

This week the government set out its plans for new police powers that will limit the ability to take part in peaceful protests. This is a move recently witnessed in fascist states and is the latest in a series of actions that the government has taken to reduce the rights of British citizens. Our fundamental right to protest is essential to a functioning democracy.

Democracy and the right to protest

My first attendance at a protest was as a child with my parents, protesting in support of nurses. Peaceful protest has – for as long as I recall – been an essential part of our freedom in the UK and the rest of the public have a choice to listen to or ignore protestors and the issues they raise.

In the UK, the Suffragettes movement in the 1900s resulted in changes to permit women to vote. At the time they were treated as anarchists and committed criminal damage*, but without these heroines, I believe that women’s rights would not be as advanced as they are today. Their protests caused change.

Nelson Mandela, Martin Luther King Jr, and Gandhi led civil rights movements that were – at the time – resisted by governments and the police. All they aimed for was less inequality.

In the UK, protests have included NHS protests, the Tory poll tax riots (not peaceful protest), EU referendum (final say/remain) marches and Extinction Rebellion (who have some peaceful protests and other protests which included – arguably – criminal damage*). There have also been far right demos and anti-lockdown protests.

I doubt anyone – other than someone who relishes in debate – enjoys a dissenting view and, admittedly, it can be downright annoying. However, there is significant importance in people being able to advocate for their rights and for equality, and for people to be able to hold government (and business) to account for perceived breaches of the law, their rights or inaction.

Without the right to challenge government, we would live in a dictatorship.

It is already feared that the reform of judicial review will make it – an area of law that is already difficult and not inexpensive – more difficult to challenge government.

I fear that some of the latest actions by the government are designed to streamline the political arena to drown out voices that challenge them in respect of Brexit consequences (Jacob Rees-Mogg said the benefits would take 50 years), their covid handling, and – perhaps – any voice which is not pro-Tory.

Our rights, our freedoms

Under the ECHR (the European Convention of Human Rights, which is not part of the EU), there is a right to freedom of expression and freedom of assembly and association which is reflected in the Human Rights Act 1998; there is a general right to protest, though this can be subject to restrictions.

However, Home Secretary Priti Patel wants officers to have the authority to make sure demonstrations don’t affect “the rights of others to go about their daily business” it has been claimed.

The new powers would give the police more power to interfere with peaceful protest. The balance of competing rights has been satisfied by the existing legislation; therefore, this – somewhat overreaching, draconian approach – is, in my view, a means to limit the people’s voices.

The power to shut the people up

Peaceful protestors have felt the wrath of police powers – through fines and restrictions based on the covid legislation – that I fear are oppressive and unnecessary. A NHS healthcare worker who organised a protest about the 1 percent pay rise for NHS staff (note that MPs were to receive £3,000 – on top of their basic salary of £81,932 – until IPSA stepped in) was fined £10,000.

On Friday 12 March, Reclaim These Streets – the vigils in memory of Sarah Everard and in support of women’s rights – made an application to court after various police forces indicated their opposition to the vigils based on Covid-19. The court – in the hearing – did not make the declaration requested. It did not, however, rule on whether the vigil would or not be lawful.

On 13 March, organisers cancelled the London vigil, citing a “lack of constructive engagement from the Metropolitan police”.

Quite frankly, if it is ‘safe’ enough for children to go to school (an indoor activity), it is safe enough to hold a vigil outside (socially distanced, wearing masks).

In a situation where people who voice their concerns about climate change or equality already face arrest, and Covid-19 restrictions have facilitated the silencing of our voices, the type of government that wishes to introduce even more restrictions is one that – I believe – wants to silence dissenting opinions. We see this in Hong Kong, North Korea, and Russia. It has no place in the UK.

In a world that is facing restrictions of our freedoms, be like Martin Luther King. And for those who do not wish to, don’t stand in the way of those who do.

*I advocate against criminal damage. While I can understand why frustration leads to this position, I only support peaceful and non-violent protest.