Boris Johnson has said he has been forbidden to announce any more targets on lockdown deadlines - but by whom? 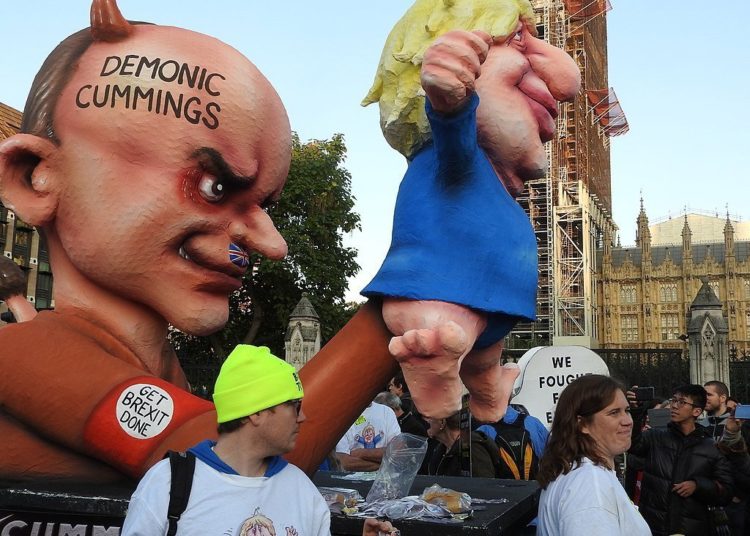 Margaret Thatcher had William Whitelaw, a Tory of the old school to help keep the party together when things got tough; she famously said “every prime minister needs a Willy”.  Up to now, in a strange reversal of roles, it seemed Johnson was Cummings’ Willy.

The two most powerful men in Britain certainly make an odd couple. One a “career psychopath” and control freak, the other a “manically disorganised” sociopath interested in self-promotion and little else. Cummings is Boris Johnson’s Svengali, a man the PM believes he cannot do without. After his spectacularly inept and incoherent performance before the parliamentary liaison committee yesterday you can see why.

Johnson’s spluttering appearance by video link must have confirmed the worst fears of many Tory MPs. The most telling contribution, apart from the glaring fact that the prime minister appeared to know nothing about his own policies, came when he said he had been “forbidden” from giving deadlines, as noted with some incredulity by Beth Rigby at Sky News:

PM has just said “I’m not giving you a deadline right now. I have been forbidden from announcing any more targets”
By whom? He’s the *actual prime minister*

It was a Freudian slip. Who, other than the Queen, has the authority to forbid the *actual prime minister*? We all know the answer to Rigby’s question, since in practice there is only one person more powerful than Johnson.

Boris is the titular prime minister, manipulated by an unelected adviser to whom he has sub-contracted most of his job; a megalomaniac who owes nothing to the Tory party and couldn’t care less if it crashes and burns. Up to now Johnson provided cover for Cummings, who we learned last weekend thinks of himself not so much as an adviser but as the gatekeeper who decides who and what the PM sees.

Cummings is said not to suffer fools lightly, which makes their relationship that much harder to understand. Johnson doesn’t so much play the fool as the fool plays Johnson. Their grand bargain was that Cummings would have unfettered power to do the dirty political work while transforming the country into a dynamic powerhouse of global trade – and Johnson would take the kudos.

It was an interesting idea. Oxford modern history graduates who have never set foot in a factory thinking they have the solution to Britain’s chronic productivity problems is novel. But now we will never know the outcome; coronavirus has put paid to all that.  The economy is shot to pieces and there will be no kudos.

One committee member, Mel Stride, a Tory MP and a former chief secretary to the Treasury under Hammond, was worried that Johnson would stick to the manifesto spending commitments and bankrupt the country. The PM didn’t reassure Stride. Instead, he confirmed that he did still plan to honour these manifesto commitments, on top of the emergency coronavirus spending – goodness knows what our debt will look like at the end of it.

Amazingly, Johnson was unaware of the no recourse to public funds policy for certain immigrants with indefinite leave to remain status, even though this has been government policy since 1999. He has obviously never done any constituency work.

The last week has taught us that Boris Johnson really is the stuttering Bertie Wooster-like persona who wouldn’t recognise a detail if he stubbed his toe on one, while Cummings needs an army of lawyers to write out a simple explanation for a trip to Durham and thinks a sixty-mile drive is an acceptable method for testing your eyesight. This is what we have come to.

John Crace in The Guardian tweeted:

For good or ill, they are now lashed to the mast together. Johnson actually believes the ‘genius’ at the centre of a government that has delivered the highest coronavirus mortality rate in Europe, is indispensable.

The Yorkshire Post’s editorial, published within a few minutes of the committee’s session, is a gem: Boris Johnson can’t be trusted over Dominic Cummings – The Yorkshire Post says. In what the paper calls a “glib comment” Johnson admitted that he doesn’t read the scientific papers, which explains “why public confidence in his handling of Covid-19 is being so tested.”

Yet the editorial notes that Johnson stressed that he had “read the ‘papers’ with regard to media coverage about the trip made to Durham and Barnard Castle by his senior aide Dominic Cummings in breach of the lockdown, and that a number of allegations were untrue”.

An interesting choice of reading priorities.

Cummings is a humanities graduate, married to the daughter of an aristocrat; Johnson an Old Etonian, member of the Bullingdon club and president of the Oxford Union. With amazing chutzpah they present themselves as men of the people, ranged against the elite. Quite a trick when they are the elite – or were until last weekend.

Finally, this item in the Derry Journal will give you some idea of the kind of entertainment we are now providing. A light plane was spotted above Dublin airport and someone tweeted to ask the airport what the pilot was doing. The airport’s reply was that he was testing his eyesight ready for a transatlantic trip.

We have become an international joke.