Conservatives want the public to 'move on' and forget the party's mistakes, but Boris Johnson can't con the electorate forever 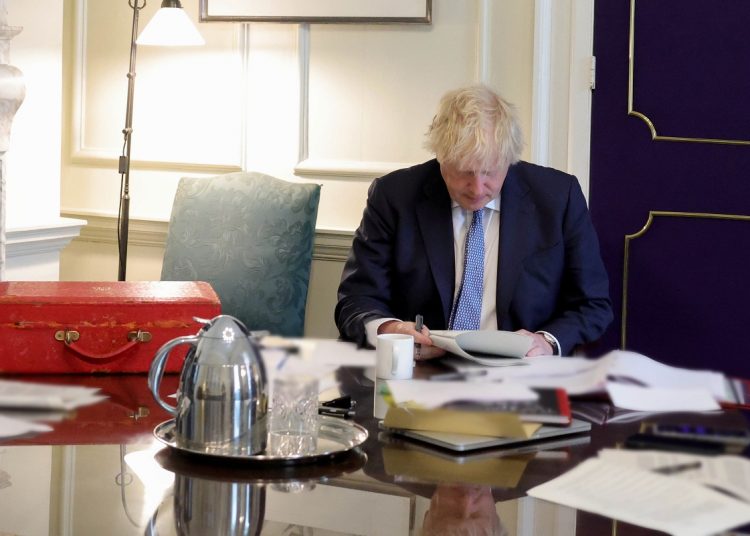 25/05/2022. London, United Kingdom. Boris Johnson-Investigation into Alleged Gatherings. The Prime Minister Boris Johnson reads the findings of the Second Permanent Secretary's investigation into alleged gatherings on Government premises during covid restrictions in his office in No10 Downing Street. Picture by Andrew Parsons / No 10 Downing Street

There is an old Jimmy Cliff song called ‘The Harder they Come’ – the harder they fall. It sums up what needs to happen to Boris Johnson and his political party neatly.

Rarely has a collection of Conservative MPs faced a worst dilemma. If they try to rally behind him, they associate themselves with the most toxic set of actions that any prime minister has ever tried to ask the public to ignore. That leaves them exposed as complete hypocrites as they try and persuade people that the evidence of their own eyes is of no value.

It is only necessary to glance at the image of the leader of a nation that was following the strictest of lockdown rules holding up a glass of bubbly to a crowded room to know that he lied. To parliament and to the public. Far from being chastened by the experience and learning from his mistakes he chose to lie again. He used all the intimidatory force of his office to make contact with Sue Gray and ask her whether she felt it was really necessary to proceed with publishing her report. Then tried to deny that he had contacted her. An action which on its own ought to be quite sufficient to finish off the career of any prime minister.

Yet his MPs daren’t finish him off. Because if they do, they know that chaos would follow. Johnson has put such a talentless bunch of acolytes in charge of running the country that there is no obvious successor. A substantial proportion of the Conservative Party want to get rid of the fanatics who have taken over and replace them with ‘sensible’ businesspeople who they believe would be capable of running the country competently. Another large faction wants to double down on Brexit and out compete UKIP on narrow minded far right obsessions. The second the Conservatives dump Johnson the two factions will start a vicious civil war with no clear winner.

Fear of that leaves them with no good options so they are left with constantly trying to persuade us all to move on.

The prime minister employs a political adviser who tests his eyesight by driving his family halfway across the country in breach of lockdown rules. Move on.

The prime minster selects a health minister who thinks that making love to his friend’s wife is an appropriate way to comply with his own social distancing rules. Move on.

The prime minister signs the country up to a deal with the EU that leaves Northern Ireland in a complete mess and tells us all it is a great deal that parliament doesn’t need to bother to scrutinise for more than a few hours. Then tells us it is such a bad deal that the nation has to break its treaty obligations. Move on.

There have been huge queues of lorries stuck outside Dover and the cost of living has shot through the roof. Move on.

The prime minister routinely and knowingly lies to parliament. Move on.

They can try but each time it is necessary to justify yet another disgraceful act of incompetence. The party can decide to move on, but it leaves yet more of the public behind.

Johnson is now a toxic brand

Johnson used to be a popular politician in London and was twice elected mayor. Now he is a completely toxic brand in the capital and his party can’t even hold Wandsworth. It used to be said that you could put a sheep up in North Yorkshire and the people there would vote Tory. Not any longer. His party got only 40 percent of the popular vote in the local elections and only clung onto power by the narrowest of margins thanks to first past the post.

The Conservative Party couldn’t even win in Oxfordshire and was roundly thrashed in Somerset. Only in some of the most desperate of neglected red wall towns like Derby, Dudley and Sunderland did they prove capable of holding their ground. It is simply not possible for them to win a general election unless they can appeal beyond that very narrow section of voters and at by election after by election they are going down to historic defeats as the public abandons them in droves.

Onwards they lurch. A party that has taken millions of pounds of donations from Russian oligarchs and allowed the country to become the money laundering centre of choice for Putin’s cronies is now trying to pretend that they are the only party which can stand up to him. Despite every single opposition party having a cleaner record on dealings with Putin the prime minister thinks he can brush off the clear links between Putin’s cash and Brexit by making silly jibes about ‘Vladimir Corbyn’.

The prime minister clearly thinks that the majority of people living in this country are stupid enough that he can lurch on through another two years of shoddy behaviour and cheap tricks and then con his way to victory in a general election. He clearly hasn’t been listening to what is being said on the doorstep.

Jimmy Cliff had it right. The harder they come – the harder they fall. We must all hope that the overweight chancer who has seized control of our country doesn’t do too much more damage before he goes down hard and takes his party with him.