We need to be in close contact with people who trust us to tell them the truth because we are trusted to listen to their needs and act on them. 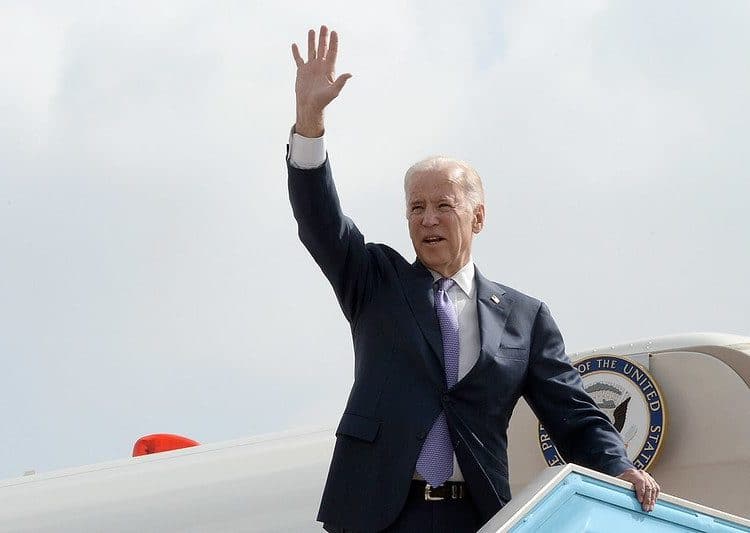 Joe Biden visit to Israel March 2016 by U.S. Embassy Jerusalem is licensed under CC BY 2.0

I’m feeling optimistic about the United States of America. Which is not something I have been able to write for some time.

It also might seem a touch naïve when night after night we see people on our screens expressing their extreme loyalty to Donald Trump. I even saw a TV clip last week where one particularly fanatical supporter proudly declared “I would die for that man”. The cynic in me muttered something along the lines of “If Trump carries on behaving like he does then you better be careful what you wish for”. Not that I would actually wish either death or ill health on either Trump or his supporters. I’d much rather he fully recovered and then got soundly beaten in the election.

Which is where my optimism comes in. Ask yourself the question: “Who is going to vote for Donald Trump at this election who didn’t at the last one?” Then ask the partner question: “How many voters has he alienated or let down over the last four years?” Trump lost the last election by three million votes and only got in because the Electoral College system over-represents the views of mid-West states and that gave him victory in a tight race.

A lot of left-leaning voters didn’t turn out because they bought the propaganda about ‘crooked Hillary’ and weren’t sure they wanted to back her. How many of those people will have regretted not exercising the power of their vote and will be determined to do so this time? Some centre-ground voters held their noses and voted for Trump in the hope that he would become more statesmanlike when he entered office. How many of them will feel confident about the future of their country if the current trajectory continues for another four years?

Trump has a very loyal base. That isn’t always what wins elections. For every ‘Yee Hah’ redneck that just wants to vote for a Good Old Boy who refuses to condemn white supremacists, there are a lot more people in the States who form reasoned judgments about competence before they vote. A sitting president needs a good solid record of reliable achievement. A reputation for unreliability, failure to work well with others, and utterly misjudging a major health scare is unlikely to be what most US voters are looking for.

With opinion polls in the States showing Biden over 10 percent ahead a month before election day, and the first televised debate resulting in lost support for Trump, it is looking like the decent reasonable people in the States are beginning to find the confidence to dump out a liar and a cheat who boasts in the locker room about grabbing women by the “pussy”.

But nothing is certain in an election where every effort is being made to manipulate the result, and a Supreme Court stacked with Trump supporters might be asked to rule on the legality of some very extreme actions taken by a man desperate to cling on to power. It is also really hard for anyone to calculate the impact on voter behaviour of Trump contracting Covid-19. Will he have attracted sympathy and won votes for his brave defiance of a virus that actually has no idea about your politics or your personality traits? Or will he attract scorn for his carelessness in catching it in the first place and then going on to infect others?

The absence of any serious criticism in the UK of Johnson’s obviously reckless decision to ignore his own advice and shake hands with patients in a covid ward doesn’t bode well. The stark reality of seeing Republican after Republican become seriously ill as a result of mixing carelessly at an event organised to celebrate the nomination of a far-right fanatic to the Supreme Court ought to push any reasonable voter into determined opposition to Trump and his reckless team of hangers-on. Logic and emotion don’t always gel.

Nevertheless, it is becoming possible to imagine the impact on world politics of a resounding defeat for Trump. The vast majority of US voters have seen the huge forest fires, the wreckage from more extreme hurricane seasons, and the increasingly wild weather, and now understand some of the realities of climate change. Denial that there is a climate emergency has become a minority view. If Trump goes, then the last vestiges of climate emergency denial are highly likely to go with him, and we might begin to get actions that are remotely proportionate to the challenge, not just in the US but across the planet.

Then imagine the impact on UK politics of a Trump defeat. The Conservative Party contains some very different factions. One wants an efficient voice representing business. Another is prepared to say “fuck business” and “let’s get Brexit done”. (Apologies for the language – it is a quote from the UK prime minister.) He is going to look pretty isolated if he continues to offer eccentric, unreliable, ego-driven leadership, if the person whose style he has copied goes down to a serious defeat. How long before even the most loyal of Conservatives starts to ask what the price is for having a leader who is only good at silly sound bites and can’t actually lead an efficient, well-organised response to a major problem? (Like Angela Merkel has succeeded in doing in Germany despite an intrinsically harder challenge than an island nation faces.)

A defeat for Trump would be a massive victory. Yet there is one thought that keeps nagging away at me and undermining all this genuine hope. How did it happen that so many ordinary working people came to believe that the Nigel Farages, Boris Johnsons, Bolsonaros, and Trumps of this world should be trusted whilst conventional politicians couldn’t be?

A victory over Trump and all he stands for will only be secure in the long term if that question continues to be addressed. My answer is twofold. These are scary times for those who depend on factory jobs in smaller cities across America or in the North of England. Whenever economic power shifts from one part of the world to another, or from one sector of the economy to another, the impact on communities is huge. The fear of losing jobs to China is based on real economic events. The fear of losing jobs to automation and robots is also real in those locations where the jobs are lost.

Reactionary ideas are easy to spread among those who experience change as a negative. The only way of dealing with this that is secure in the long term is to create some positivity for those people. That means strong government and regional policies, coupled with high investment in modern technology. In other words a proper Green New Deal that sees hope return to neglected communities. We have no shortage of those in Yorkshire, and no shortage of the reactionary attitudes that have come with decline.

My second answer is, I believe, even more important. Progressives have to work hard in local communities and become trusted on the ground. Making a connection between political leaders and ordinary people depends on years of hard work in local communities. In the early twentieth century the Labour Party grew rapidly because almost every working person had met someone in the party who had personally helped them. The old Liberal Party similarly prided itself on putting large field forces into listening, campaigning and achieving small deeds locally. I like to think that people in my own party, the Greens, have learned that lesson and our councillors and the vast bulk of our members spend hours of time working in local communities. There are plenty of decent Conservatives who also pride themselves on work they do for local communities.

Whatever the political views of decent people there is only one real guarantee of beating the Donald Trumps of this world permanently. The work needs to be put in within local communities to make the connection between ordinary people and the decision makers who claim to represent them. What we do in local communities across Yorkshire matters. The hard graft of listening and responding to the needs of people who don’t always agree with us is fundamental.

Liars have access to a lot of money and large sections of the mass media. Honest people have only one real way of fighting professional propagandists. We need to be in close contact with people who trust us to tell them the truth because we are trusted to listen to their needs and act on them. That is the way to defeat what Trump stands for securely without the risk of it returning.