As a reward for telling the PM an uncomfortable truth, in January 2017 Rogers was forced to resign. Within days, Mrs May revealed her plan which, in recognition perhaps of Sir Ivan’s advice, said the UK would leave the single market but remain in some sort of customs agreement with the EU. 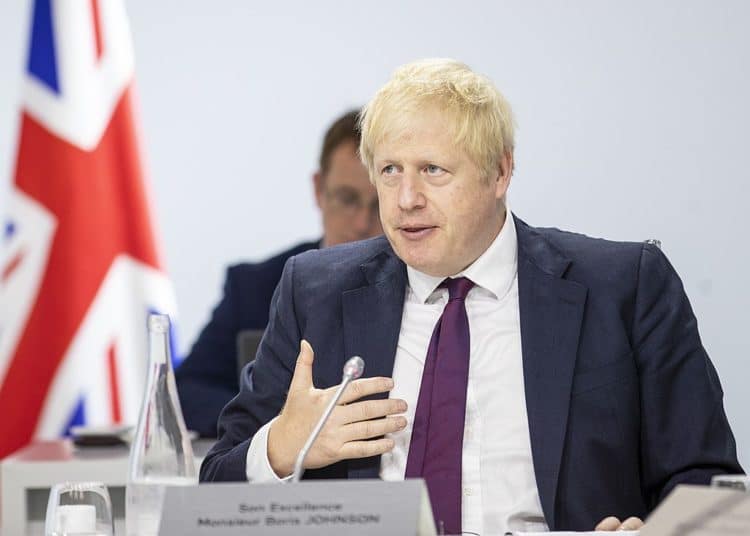 The Prime Minister at G7 in 2019: UK Government / OGL 3 (http://www.nationalarchives.gov.uk/doc/open-government-licence/version/3)

The furore about the UK proposing to break international law has every potential to grow into a full-blown constitutional crisis. If the UK internal market bill, which will override Johnson’s EU withdrawal agreement, passes the Commons this week it may well be blocked by peers, setting the two chambers against each other.

However, the extraordinary intervention yesterday of Sir Geoffrey Cox, Johnson’s former attorney general, makes it less likely the bill will pass unamended. Cox, writing an excoriating piece in The Times: Honour rests on keeping our word, says it is “unconscionable” that the UK should seek to abrogate treaty obligations to which we “pledged our word less than 12 months ago, and which this parliament ratified in February”.

The concept of keeping one’s word has always been alien and mysterious to Johnson as we know. But more than this, Cox has challenged the prime minister’s suggestion that the consequences of the NI protocol somehow came unnoticed out of the blue. He emphasises that they were, “perfectly plain and foreseeable”.

With rebel Tory MPs plotting to thwart the bill, Johnson, Cummings and the cabinet are starting to look besieged from all sides. They are beginning to circle the wagons in Downing Street.

Breaching a solemn treaty commitment is just another example of what happens when Brexit is threatened with reality. The government’s first move is always to try to adjust reality, in order to accommodate the contradictory pledges made before and after the referendum.

At the root of it all lies the problematic and insoluble Irish border issue, which ended May’s premiership and may well do the same for Johnson.

In the referendum campaign during a visit to Belfast in February 2016, Johnson told the BBC that the land border on the island of Ireland would remain “absolutely unchanged”. It was one of the few things he said which turned out to be true, although he had no idea just what a tortuous path it would be to reach that objective. The prime minister is now working hard to unpick that commitment and restore his reputation for unalloyed mendacity. Because reneging on the withdrawal agreement may well bring about exactly what he said would never happen – the reintroduction of a hard land border.

Some time after the referendum vote in 2016, Sir Ivan Rogers, our then UKREP to the EU, told Theresa May that she had made three firm commitments that were impossible to deliver together and that she would have to choose any two of the three:

It was another issue where Britain could not have its cake and eat it – at least not by any legal means.

As a reward for telling the PM an uncomfortable truth, in January 2017 Rogers was forced to resign. Within days, Mrs May revealed her plan which, in recognition perhaps of Sir Ivan’s advice, said the UK would leave the single market but remain in some sort of customs agreement with the EU.

By July 2018 in the Chequers agreement, Mrs May confirmed she had chosen to keep 2 and 3 but adopt a common rule book and remain in the customs union. This provoked the resignation of Boris Johnson and David Davis and, as we know, she then failed to get parliament to agree to her solution.

Johnson came to power vowing to ‘get Brexit done’. In October he reached agreement with the EU, opting to keep 1 and 2, although afterwards he implied 3 would be kept as well, inferring there would be no regulatory divergence and claiming “unfettered access” to Great Britain for traders in Northern Ireland.  This, as everybody knew and Cox has now admitted, was not what was written in the NI protocol.

The problem for the prime minister is that this time, it is his signature on the withdrawal treaty, now part of international law, committing the British government to its precise terms.

Johnson is still facing the same choice as Theresa May, but at least she can take credit for recognising there was a choice. He still cannot bring himself to accept that one of the three pledges is always mutually exclusive to the other two. Last October, having appeared to make a decision, he is now seeking to break the law to roll back on the commitments he gave.

A customs and regulatory border is an essential prerequisite for divergence between two legally distinct territories. The 1998 Good Friday agreement, another international treaty, makes a land border almost unthinkable, with a serious risk that sectarian violence will return. The freedom to diverge from EU rules is Johnson’s Brexit raison d’être, so the only solution, however unpalatable and threatening it might be to the United Kingdom’s integrity, is a border in the Irish Sea.

The NI protocol, which the government is seeking to wriggle free from, sets out how the EU and UK see that border being operated. The province will remain under much of European law for the foreseeable future, some of which covering state aid rules will reach across into Great Britain.

If Johnson repudiates the withdrawal agreement, the EU27 and the European parliament will never conclude or ratify a trade deal. Equally important, the influential US Congress ways and means committee will not ratify a US-UK trade deal.

By the end of the year, Global Britain may have no preferential trade agreement with any of the world’s three major trading blocs. This would come at a time when the second wave of coronavirus is (most likely) in full flow and the UK economy is struggling with the consequences of the deepest recession for 300 years.

Johnson will very shortly face a Hobson’s choice: take it or leave it. For perhaps the first time in his life, the prime minister will be forced to live with the consequences of his hubris.

Any deal will be better than a bad deal. What a turn up that would be.

I voted for “Global Britain”, not to make the UK an international pariah