Kerry Pearson writes about the devastating situation in Afghnaistan as the Taliban take control of Kabul and thus the government; while states like the US and UK withdraw from their embassies, China reaches out to the Taliban to strike a deal and to recognise their government. 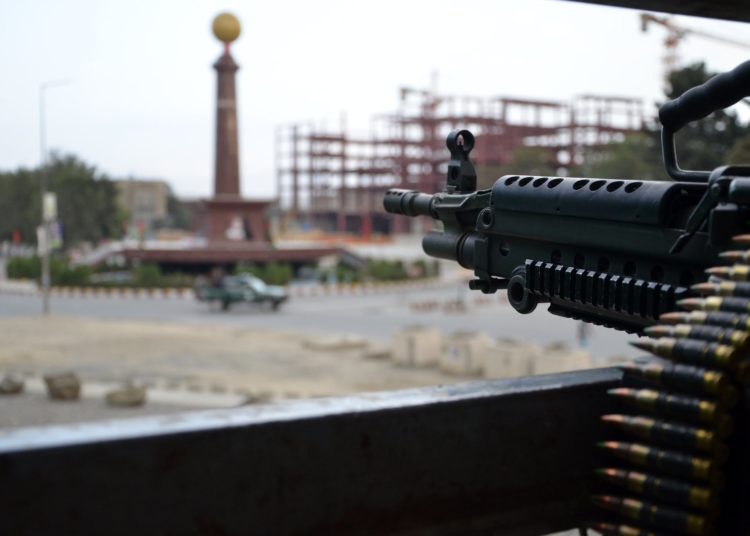 Photo from 13 September 2011: "Insurgents attack the International Security Assistance Force Afghanistan headquarters and the US Embassy in Kabul" by DVIDSHUB is licensed under CC BY 2.0

Photo from 13 September 2011: “Insurgents attack the International Security Assistance Force Afghanistan headquarters and the US Embassy in Kabul” by DVIDSHUB is licensed under CC BY 2.0

Since Biden and then Johnson’s announcement to withdraw troops from Afghanistan by 11 September (the anniversary of 9/11), the Taliban have advanced through the country, most recently capturing the capital Kabul. While there has been no international recognition of the new Taliban government in Afghanistan, China – which shares a 76km border – says it is ready to deepen “friendly and cooperative” relations with the organisation, according to a government spokesperson. Chinese officials have called for a “smooth transition” to power, and look set to further their economic and political aid to the region.

On Sunday, the capital Kabul, where US-backed leader Ashraf Ghani once ruled, fell. Forced to flee his office, Ghani is now with his family in neighbouring Uzbekistan. In a public statement, he explained that he fled the country to “avoid bloodshed” and prevent “disaster”.

US, UK and EU withdraw from their embassies in Afghanistan

The US is now implementing a full and fast withdrawal from its embassy in Kabul. Images of diplomats being airlifted by helicopters from their compound in Kabul to the airport are poignantly reminiscent of the end of the Vietnam War nearly 50 years ago, when American troops and personnel were rescued from the roof of the American embassy in Saigon, leaving behind hundreds of South Vietnamese in the embassy compound.

In Afghanistan, desperate civilians attempted to climb up airport gantries to get onto the last flights out. Others have not been so fortunate; commercial flights have been cancelled and one Afghan official described how his flight had been prohibited from leaving.

The UK government has also made plans to withdraw its ambassador from Afghanistan, thereby ending its diplomatic presence. Boris Johnson said, “we don’t want anybody to bilaterally recognise the Taliban … we want a united position among all the like-minded … so that we do whatever we can to prevent Afghanistan lapsing back into a breeding ground for terror”.

On Friday, Norway and Denmark rushed to close their embassies, with the former moving all staff out of the country. Norway’s foreign minister told a press conference, “this also applies to locally employed Afghans with immediate family in Norway who wish it”. Meanwhile, Germany is cutting some of its staff numbers in the country, and is sending crisis support team to ensure increased security and safety at the embassy for remaining staff.

While much of the attention in the media has been drawn to the role of the US and UK in Afghanistan, China has, for a long time, been expected to seize the withdrawal of western troops as an opportunity for gaining significant power and influence in the Middle East.

Last month, Chinese foreign minister Wang Yi, met with Taliban leaders and officials. In line with China’s controversial foreign policy of ‘non-interference’ in other country’s internal affairs, and its failure to call out human rights abuses for fear of infringing upon States’ ‘sovereignty’, China’s foreign ministry spokesperson Hua Chunying said that the country, “respects the wishes and choices of the Afghan people”. Similarly, Wang suggested that the Taliban would “play an important role in the process of peaceful reconciliation and reconstruction in Afghanistan”.

Opportunities for China recognising the Taliban

For many, it comes as little surprise that China has reached out to the Taliban. Afghanistan is a country rich in resources, and thus a potential for significant investment. China’s practice of increasing economic, political and security support to the Middle East has been employed to ensure new trade partners for the state, while its Belt and Road Initiative (BRI) – which is set to connect 70 countries across Asia, Europe and Africa – places China at the centre of worldwide trade.

As the largest global importer of crude oil, of which half comes from the Middle East, it is unsurprising that the Taliban, after meeting with Wang, said that they would like China to play an even bigger economic role in the region.

But China is also in an awkward position. For years, it has blamed religious extremism for the destabilisation of regions such as Xinjiang, which borders Afghanistan, and has expressed concern that a Taliban-controlled area (in Afghanistan) could harbour separatist forces, potentially fighting for an independent Muslim region of Xinjiang.

To eradicate such threats, borders have been hardened, Uighurs Muslims have been placed in detention centres, and China has implemented what they describe as vocational training facilities to crush Islamist extremism.

But China has more to fear than just security threats from Afghanistan. Andrew Small, a fellow at the German Marshall Fund of the United States, a public policy think tank, reveals that there are concerns within China of the Taliban’s “ideological agenda”. The government is wary of the wave of militancy that may spread through Afghanistan now that the Taliban have taken control.

The future for Afghanistan and China’s relations

Right now, the situation in Afghanistan is ever changing. Few people expected the Taliban to take Kabul so quickly, and there have been mixed messages from the Taliban on the type of rules they will implement, such as whether girls will be granted education.

China is adopting a pragmatic approach. Officials have described the situation as a “humiliation” for America, they publicised the Taliban’s visit to China, and they have demonstrated their willingness to recognise the new government and even strike a deal with them.

As the Economist points out, for 20 years, since the American and UK occupation of Afghanistan, the Taliban have had the chance to “dream of what they will do when they restored their emirate”. Now, the world holds its breath as we wait to find out what this will mean.