Sleaze has spread throughout the government during the pandemic; officials have selfishly acted in their own interests, not the nation's. 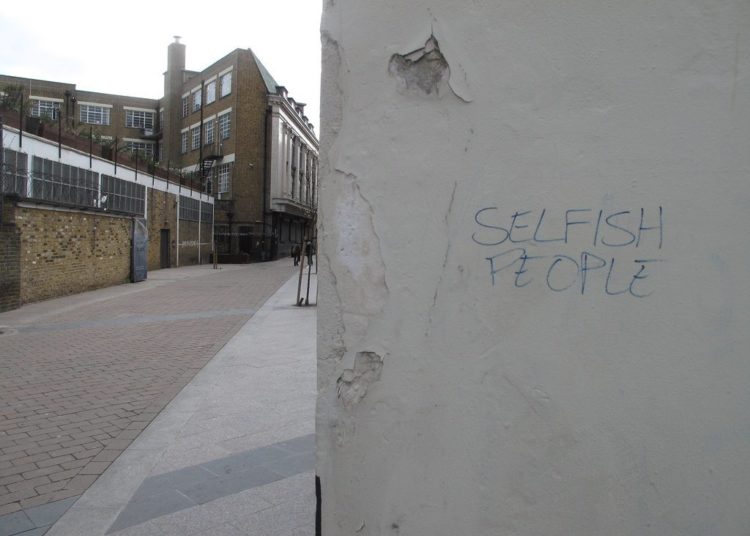 "Selfish People" by duncan is licensed under CC BY-NC 2.0

Even Karl Marx had good things to say about the creative power of capitalism. Almost the entire opening section of the Communist Manifesto consists of praise for its achievements. Though admittedly, it does get followed by passionate statements about how capitalism will inevitably sow the seeds of its own destruction and pave the way for a new and better economic system.

When it comes to extractive corrupt capitalism, it’s a lot harder to find anyone who has a good word to say about it. It’s not hard to admire a self-made entrepreneur who pioneers a new area of business, but it is very hard to admire a system that strips resources out of a country and leaves little behind.

Ever since humanity evolved, there has been a huge advantage for groups who are good at working collaboratively. On the African plains you need a lot of eyes looking out for danger and it’s hard to reliably feed yourself unless you are part of a co-operative. Unfortunately, there is also an incentive for an individual working within the safety of a group to pursue their own selfish interests.

Any strong and healthy society can cope with a small number of people taking a free ride at the expense of others. Indeed, it’s possible to construct a coherent argument that society needs a small number of rule-breakers if it’s to progress, and if a bit of selfishness comes with creativity then it can be constructive.

A society with solely selfish and sleazy interests

What no society can cope with is a situation where the proportion of people pursuing their own selfish interests begins to climb to the point where fewer and fewer people see any point in working for the collective interest and obeying rules of reasonable behaviour, because they just end up feeling like mugs who are taken for granted and exploited.

Such a society tends to break down, as everyone tries to strip away whatever they can as quickly as possible. Just look at the behaviour of the Russian oligarchs and what it has done to that country if you want an example.

The pandemic reveals the importance of collaboration

During lockdown, Britain and most of the rest of the world has had a serious lesson in the benefits of collaboration.

The scientists and government ministers at the heart of pandemic planning were initially intensely fearful that if they asked British people to isolate themselves and stay at home in order to benefit the collective then it wouldn’t happen for long and people would start to lose their commitment to society. Government could be relied on to do the right things but could the population?

In practice, things turned out the other way round.

There are both good and bad outcomes of the pandemic

The level of inconvenience ordinary people have put themselves through in order to help control the pandemic has been remarkable. There’s been a mass outbreak of helping others, with simple things like shopping or collecting medical prescriptions. Vaccination centres have large teams of willing volunteers giving time with no hope of reward or glory, simply because they want to help out.

There have, of course been a small number of badly behaved people who have broken the rules, and sometimes the demonstrations of anti-lockdown protestors have attracted several hundred supporters. But day in, day out, the predominant pattern of behaviour has been a desire to support each other to get through this together.

UK government benefit themselves during a bad situation

All of which makes it even more disturbing that we have people in government who have taken advantage of the situation to advance themselves.

How does a nurse feel who works flat out alongside exhausted colleagues on a covid ward, and then turns on the television to see the health minister explaining why it was fine that a contract should have been awarded to a firm that his family has shares in?

How does someone who has volunteered to come out of retirement to work unpaid feel when they learn that £37bn has been spent on test and trace and the system still doesn’t work properly?

What does it feel like to be one of the many people excluded from receiving covid support payments, when you discover that the chancellor was having discussions with a former prime minister about helping out a company that was paying him obscene amounts of money?

Sleaze matters. It isn’t just bad publicity to be shrugged off. It is a corrosive influence that gradually destroys collective trust, increases cynicism and promotes a culture of selfishness. At a time of huge global challenges – environmentally, economically and socially – humanity has to learn to work collectively on a planetary-wide scale.

What the country needs is an honest, not corrupt, leader

At times like this, the country needs a strong lead from the very top to set the cultural tone. Our leader is Boris Johnson. The tone he is setting from the very top is the prime source of a pandemic of corrupt behaviour.

What does it do to the soul of a country to be led by someone who lies as casually as he abandons his promises to his latest partner?

What example does it set when the mayor of London uses that job to promote the career of his mistress but is able to dodge the consequences because he has gone on to become prime minister?

Is it any wonder we have riots in Northern Ireland when the prime minister told them he would never agree to a border in the Irish Sea, then personally negotiated a deal with the EU to do exactly that, then denied he had signed such a deal, before acted surprised when his shoddy deal started to cause problems?

What goes on in the mind of Chancellor Sunak when he recalls that he got the job because his boss refused to kowtow to Dominic Cummings and got sacked as a consequence? Is it any surprise he then thinks solely about his own self-interest and decides to send money for deprived communities to relatively wealthy Richmond where he just happens to be the local MP?

The reputation of the civil service ruined by sleaze

For over a hundred years, Britain’s prided itself on having an independent civil service that’s selected on the basis of talent and cannot be corrupted. What’s left of that reputation when a senior civil servant is allowed to sit on the board of a company that’s seeking government contracts? What’s left of independence when political advisers dominate decision-making?

Britain is a society at a turning point. Throughout covid we’ve had the benefit of some amazing lessons in selfless behaviour from amazing ordinary people. Unfortunately, we’ve also had Johnson and the far-right cabal he chose to accumulate around him. The only lesson any reasonably balanced observer could learn from him is that a cynical pursuit of self-interest and sleaze gets you the top job.

At the very heart of government there’s a deeply corrupting influence. I fear for the future of my country if he remains in power for another three and a half years.