A coalition of organisations and MPs has called on the prime minister to put an end to the ongoing Brexit misery. 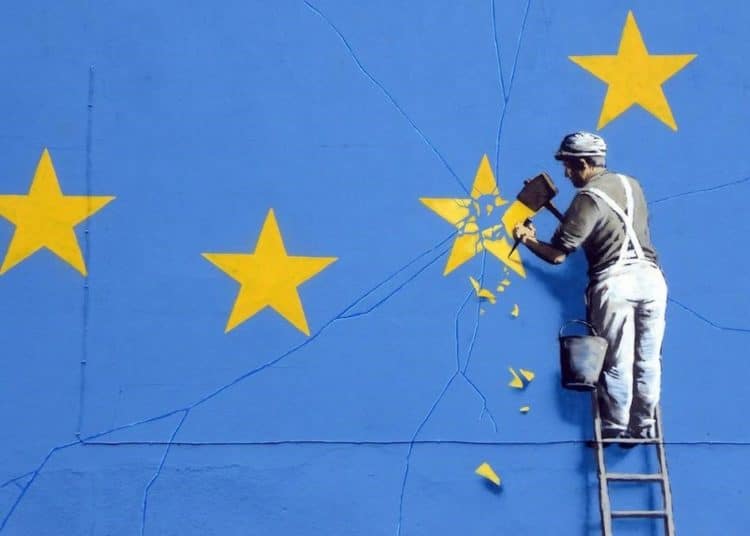 “Banksy does Brexit (detail) #banksy #brexit” by dullhunk is licensed under CC BY 2.0

A coalition of MPs, organisations and grassroots groups has called on the prime minister to put an end to the ongoing Brexit misery. This follows the chaos last week surrounding the government-imposed deadline for settled status applications, which has left many thousands of EU citizens in limbo, facing the prospect of being deported from the UK. But the Brexit misery extends now to almost every sector of our economy and society, and has become untenable.

The letter was organised by Lord Adonis, chair of European Movement UK, and was signed by representatives of Save British Farming, the Musicians Union, the Young European Movement, and leading figures across the political spectrum. It cautions the prime minister that, “the situation is increasingly critical”, and says the measures called for are essential to prevent “an ongoing economic and social crisis”.

The letter spells out how the prime minister should dramatically reduce the negative impact of Brexit in just four simple steps:

The full text of the letter

Six months after you signed your Brexit deal with the EU and the transition period ended, Brexit is not done. Problems of acute immediate concern are still unresolved and the situation is increasingly critical. Instead of stability and the sunlit uplands which you promised, we have gunboats in Jersey, millions of jobs in jeopardy, the threat of empty supermarket shelves in Northern Ireland, and an impasse in relations with the EU.

UK professionals – including artists, musicians, engineers and architects – can no longer conduct their business freely across the EU, wrecking their livelihoods and the future of economic sectors worth tens of billions to the UK.

The Northern Ireland Protocol has introduced a customs border between Great Britain and Northern Ireland which no one in the UK wants but you are unable to overcome because of your intention that the GB fully exit the EU Customs Union and the Single Market.

Farmers’ livelihoods are at risk because of the loss of EU markets, while future trade deals beyond the EU risk undercutting their produce.

Young people are waking up to the fact that they have been lost the chance to participate in the unrivalled Erasmus+ programme, depriving them of the chance to live and learn across dozens of European countries.

Most urgently, tens of thousands of EU citizens, who have made their home in the UK, face risk of losing their homes and incomes because of an arbitrary deadline for registering for Settled Status which the government itself cannot meet. Another Windrush calamity is in the making in respect of EU citizens who are in the UK wholly legally – until your arbitrary decision to withdraw their EU citizenship rights within the UK from the end of June.

We are writing to ask that you take four immediate steps today to help those most affected by this situation:

These four steps are essential to stabilise your Brexit deal and prevent an ongoing economic and social crisis in its immediate implementation.

We look forward to your response.