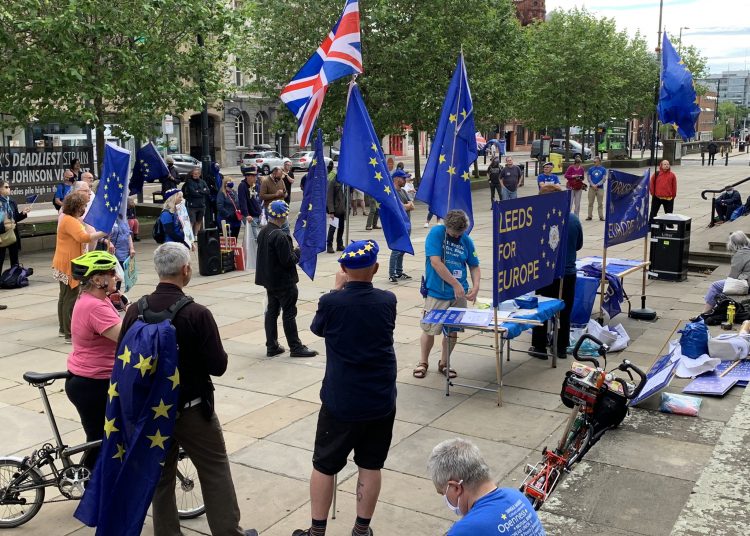 Earlier this month Lord Frost, the unelected bureaucrat who manages the UK’s relationship with the European Union, gave a speech to the Konigswinter Conference in Germany in which he made the following comment about Brexit:

“It’s worth saying perhaps to our German friends that there is no longer any serious debate on the subject in Britain. No major political party advocates EU membership, and, while a proportion of the public may still regret Brexit, there is no energy behind a rejoin movement. Overwhelmingly we are now looking forward.”

Reports of Remain’s death have been greatly exaggerated

With that statement, Frost shows a complacency that could come back to bite him in the future. Whilst pro-EU activists have been relatively quiet during the pandemic, this has been because of lockdown and restrictions, not due to the death of the Remain movement.

Many of the people who previously identified as ‘Remainers’ licked their wounds, grieved for the loss of EU membership, and morphed into a campaign to rejoin the EU.

So far, the campaign has been conducted on social media, in Zoom meetings and webinars, and through the letters pages of the local press. But with lockdown restrictions easing, things are moving forward and the movement is starting to make its case to the wider public.

Last week, to coincide with the fifth anniversary of the EU referendum, the pro-European group ‘Leeds for Europe’ emerged from lockdown like a butterfly from a chrysalis to hold its ‘Brexit isn’t working’ protest in Leeds city centre.

The protest was one of a number being held in various cities across the UK including Manchester, Newcastle, Nottingham, Edinburgh and London. The protests were the brainchild of anti Brexit campaigner Steve Bray. Bray is the man in the top hat who gate crashes television interviews with MPs outside parliament by standing in shot with his placards, and who used to shout “Stop Brexit” through his giant metal megaphone.

These days Bray has a large portable speaker and is able to get his message across at a much increased volume. There is more than a little truth in the rumour that the parts of Priti Patel’s policing bill dealing with noisy demonstrations are specifically to enable the police to shut Bray down.

Bray was joined at the Leeds protest by Yorkshire’s ‘Remain Voice Choir and band’, which is now called ‘The Reunion Choir’. The choir made its first public appearance since lockdown, interspersing the speeches with some of their classics, such as “Your Brexit Deal’s half Baked” (to the tune of On Ilkley Moor Baht ‘At), I’m Forever European (I’m Forever Blowing Bubbles), Holy Tory what a Hell of a Mess We’re In (Glory, Glory) and new songs like The Greased Piglet Song (Eton Boating Song).

The various songs were enthusiastically received by the protesters.

Personal accounts of the impact of Brexit

The speeches themselves offered a mix of people’s personal experiences of Brexit and how it isn’t working. People spoke about the rise in prejudice they’ve encountered, together with increased instances of intolerance and racism.

Others gave accounts of the difficulties they have when entering an EU country now that the UK is a third country, the difficulties faced by musicians who want to perform in the EU, and the dangers to peace on the island of Ireland.

One of the most powerful and moving speeches was given by Joan Pons Laplana, a nurse from Barcelona – one of those people Dido Harding is not keen on having work in the NHS – who recently wrote for Yorkshire Bylines. He spoke about the toll on his mental health dealing with the uncertainty of Brexit whilst working on the frontline against covid in Sheffield, and how that strain was responsible for the death of one of his best friends. Despite this, he has not given up the hope of achieving a better world for everyone.

Whilst the Labour leader Keir Starmer is nervous about speaking about Brexit, Leeds North West MP Alex Sobel and Leeds North East MP Fabian Hamilton both sent messages of support which were read to the protesters.

Alex Sobel focused on the Settled Status programme, with the deadline for applications being this week. He said:

His colleague Fabian Hamilton drew attention to the importance of diplomacy:

“If the government was truly serious about ‘Global Britain’, it would engage with our European friends and allies, not stoke division and endless trade wars.”

Next steps for the fledgling movement

It was encouraging that people still feel strongly enough about Brexit to come into Leeds city centre on a Thursday evening whilst covid restrictions remain in place, but this is the first step.

In his closing speech Richard Wilson, chair of Leeds for Europe, committed the group to continuing to continuing to highlight that Brexit isn’t working, to expose the government’s lies, to support the rights of EU citizens who live in the UK, and to work closer with our European friends and neighbours to lead to the eventual rejoining the European Union.

Peter worked in the pensions and investment industry for 35 years and was a senior manager in a FTSE 100 company. He also advised large employers on pension provision for their staff and advised individuals on pension and retirement planning. Now retired, he lives in Leeds with his wife and miniature schnauzer Jack. His interests include politics, cricket, and reading. He has suffered from a lifelong affliction of supporting Ipswich Town FC.