As Martin Brooks notes, fish are not subject to the freedom of movement restrictions that Britain's people now are. "It’s questionable if the notoriously independently minded fish can be persuaded to change their attitude and behaviour." 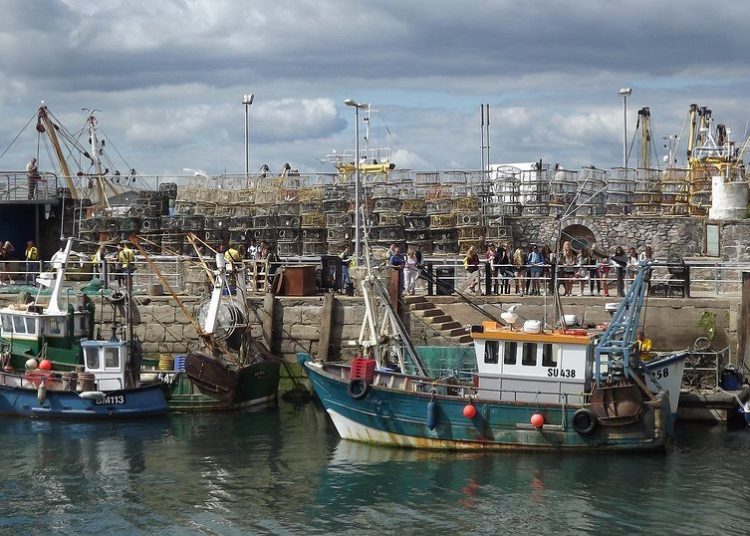 The prime minister and government ministers have been dismayed to discover that, under the Brexit trade deal, fish continue to have freedom of movement. It’s in keeping with many other embarrassing deficiencies exposed since the deal was hastily put together and announced as a triumph for everyone and everything British.

This latest revelation of shortcomings of the deal means that a choice once enjoyed by all British citizens is now retained only by our fish. No wonder they’re happy. A secondary problem has arisen because it seems the fish have absolutely no idea they’re British.

“We knew this was going to happen because the government clearly has no idea of how the world of fish and fishing actually works. We decided to keep our heads underwater and hope the anomaly was missed. Their incompetence is nothing if not dependable. Sure enough the strategy worked. We’ve been moving around as we like for millenia before EU quotas were agreed on the basis of historical catches by participating nations. We’ve no intention of giving that up just because British membership of the EU ends just 45 years after it began. British sovereignty means very little to us. We’re the original citizens of anywhere we like to swim.”

It will particularly irk ministers to discover that this oversight is the main reason why British fish are so content with the outcome of Brexit. Priti Patel is said to be furious. The idea of fish behaving with indifference to their nationality and being able to come and go as they please is an affront to the government’s ideology. The security controls at the borders between marine areas are apparently so lax that fish don’t even know they are crossing from one area into another. They appear to see this freedom as an animal right, the sort of notion the government detests.

Minister have been tight lipped about their response to this situation but are believed to be putting together a package of measures to ensure their Brexit philosophy is not undermined by a bunch of ideologically suspect fish who clearly attach little importance to being British and wear their nationality far too lightly. They go shoaling about into decidedly un-British fishing grounds only to be caught under quotas held by foreign fleets without so much as a twinge of patriotic conscience.

The Home office is considering the following measures:

Number 1: All fish born in British waters will be registered and once they’ve reached maturity they’ll be recalled to have their tailfins tagged with the flag of St George.

A government spokesperson who didn’t wish to be named told us, “Yes, it’s more red tape and bureaucracy but we’re coming to realise that’s what sovereignty means and taking back control requires.

“By the way to show how committed we are to reducing the spiralling costs of Brexit, we’ve opted for the flag of St George* because we’re not going to fall into the trap of spending billions on a Union Jack tagging process that will be irrelevant once Scotland and NI Ireland have left the UK and taken their fish with them. In spite of his name, Chris Grayling will get nowhere near this one”.

*St George is believed to have been born in Turkey and had little if anything to do with England or Wales.  What is known about him is hedged with the caveat it is “largely mythical” including the slaying of a dragons, so it’s fitting his flag should become the residual, post-Brexit symbol of what was once the UK.

Number 2: Priti Patel has “made it clear” that while all fish bearing the flag of St George are ours to catch and eat, we are open to the brightest and chunkiest fish coming into the UK waters from other countries subject to stringent enter requirements.

There will be vetting at the border of British waters. All foreign fish will be weighed and then subjected to a test to confirm they know about British fishing history. This idea has already floundered because what’s really clear is that the fish will know more than current ministers. It will come as a revelation to them that it was British governments who encouraged the selling of our quotas to foreign fleets, who took them up as a long-term investment in the industry.

Number 3: A new court will be established for adjudicating on all disputes regarding fish movements and non-national catches nattily entitled COD (Catches off Denomination).

In the interest of balance, we interviewed fish around European waters.

Herr Ing, a fish we found in nominally German waters, was very relaxed about the free movement of fish explaining there are benefits for stock levels and sustainability in fish being able to move unhindered around the seas around Europe without being pre-occupied with national identity.

A spokesfish near Finland, who asked to be identified only as Dorsal, commented:

“We’ve a more Scandanavian attitude to fish nationality. As far as we’re concerned we’re all the same just trying to share the oceans and get on together in life. All this fish nationalism is so outdated in its understanding of the connectedness of the world”.

So the fishing industry is in for a challenging few years before our fish stocks can be brought back into line and understand what it means to be a British fish and the responsibilities entailed. Thousands of civil servants are involved in developing and delivering fish nationality corrective programmes. All non-British fish will have to come to terms with vetting before they enter our waters. It’s questionable if the notoriously independently minded fish can be persuaded to change their attitude and behaviour. Just like many of the wished-for outcomes of Brexit, it will be years, if ever, before the benefits of this nationalist fervour will materialise.

Don’t bet against the fish holding out for nationalist neutrality and the rest of us realising it would make more sense to go back to the arrangement of general free movement and less emphasis on corralling nationals into separate spaces.

Stop Press: ministers have just been told by civil servants that St George is the Patron Saint of Lithuania, Portugal, Greece, Catalonia, and Hungary not to mention Georgia, Russia and Ethiopia. So back to the Brexit planning drawing board – again.