Even the Daily Mail has finally woken up to discover the reality of Brexit, warning that supplies of fresh fruit and vegetables are being squeezed by Brexit red tape at our ports. ] 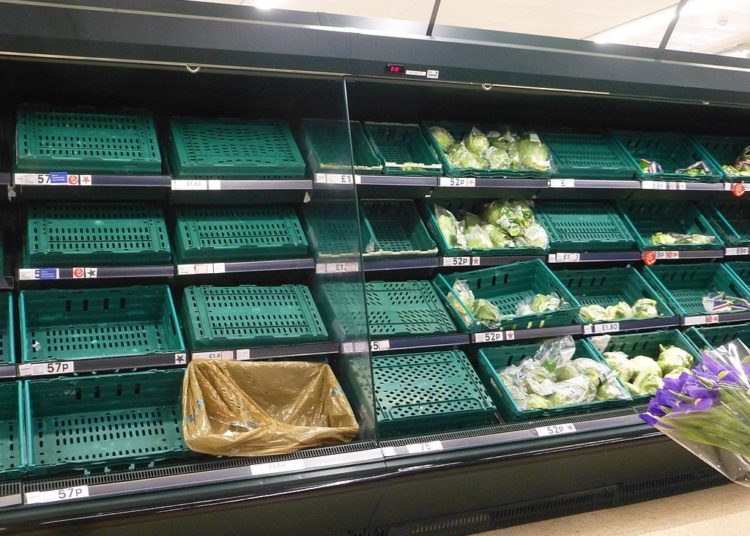 The reality of what Brexit means is quickly becoming apparent. Britain is starting to look like Venezuela 2019, with looming fresh food shortages as supermarkets run out and empty shelves begin to appear across the country.

The Daily Mail itself has an article today with the headline: We’re fresh out of fresh food! Supermarket shelves are hit by Brexit port chaos and staff shortages as stores start to run low on fruit and veg. Perhaps not surprisingly, it rather uncharacteristically ignores its own highly prominent role in bringing it about.

Had anyone suggested such a thing or indeed anything like it, in the first few months of 2016, Michael Gove and Boris Johnson, co-leaders of the Vote Leave campaign, would have dismissed it as ‘preposterous’ or ‘absurd’ and part of ‘project fear’. Now it’s all too real.

An emergency meeting was held last Thursday between business groups and Cabinet Office minister Gove, where he was warned that “baffling Brexit rules” threatened serious problems at the borders, with one leading figure describing the new rule book as a complete “shitshow”.

The Guardian claims  Mr Gove seemed “very concerned” at hearing reports of problems, after a week in which Marks & Spencer was among leading companies to warn that more bureaucracy would increase costs. The paper’s source added: “[Gove] seemed to realise the full gravity of the situation that is unfolding and about to get worse”.

Gove, the former journalist whose knowledge and understanding of integrated trans-national supply chains could be written on the back of a postage stamp with a 4-inch paint brush, appeared to be taken by surprise.

If he has finally realised the gravity of the situation, he didn’t show it when he appeared before the cameras on Friday like a minor functionary calmly forecasting “significant additional disruption” in the weeks to come, as if it was nothing to do with him as he attempted to shift the blame onto businesses for lack of preparedness.

“Industry welcomed the trade agreement that avoided the catastrophe of no-deal, as tariffs and quotas would have been a disaster for exporters. However, this is only a starting point, as there are still substantial issues that need ironing out, with many months, if not years, of tough negotiations ahead.

“There are customs experts with 30 years’ experience who are baffled by what the new regulations mean, let alone small and medium sized businesses who have never had to deal with the kind of paperwork that is now required. The great fear is that for many it will prove too much and they will simply choose not to export to the EU.”

John Martin, policy manager (NI) at the Road Haulage Association tweeted in response to a TV report yesterday about shortages in Northern Ireland, suggesting it was much more than a few teething issues:

The government honestly seemed to believe it could impose a massive change in the trading relationship with our largest overseas market overnight with almost no preparation and that it would all go off without a hitch, counting on good old British exceptionalism to get us through.

Someone on Twitter posted a clip of Dominic Raab, who in late 2016 seemed to think Brexit would lead to a reduction in bureaucracy.

Raab later admitted he “hadn’t quite understood” how reliant UK trade in goods is on the Dover-Calais crossing. Presumably after this week the penny will have dropped.

James Withers, chief executive of the trade body Scotland Food and Drink, says the British government’s dismissal of a request from them (and most main business organisations) for a grace period was a “critical mistake”. He thinks the problems at Dover may only be the tip of an iceberg; less visible is the real damage being done in cancelled orders and rejigged EU supply chains:

“We will begin to see gaps on shelves from this Wednesday. The only way to resolve it is for the Government to sort out the paperwork issue. This should have been at the top of the Government’s agenda, but it did not even cross their radar”.

Several trade commentators have put the blame squarely on the government.

Our trade negotiators prioritised Johnson’s red lines, which is why we ended up with a very thin, very basic deal. If you place sovereignty above trade and the unity of the Tory Party above everything, this is what you get.

And the notion that the EU will be interested in quickly resolving our problems and negotiating fixes, shortcuts and easements to get trade flowing again is wishful thinking. If Brussels agrees anything it will only be to their advantage, since we are in an even weaker position than before.

Fishing is settled for the next five years, we can’t threaten to walk out again, and all of the border problems leading to empty shelves and shortages as well as temporary factory closures (and possibly many permanent ones) are all too painfully apparent. The problems can no longer be airily dismissed by claiming EU member states need us more than we need them, when it’s quite clear they don’t.

The difficulty for Johnson from now on is that the only things he has to offer in exchange for any small concessions will be his red lines.

Is Covid-19 turning us against vulnerable people?