In a system that’s dominated by a duopoly of two parties that cannot be unseated, there are two possible paths: populism or electoral reform. 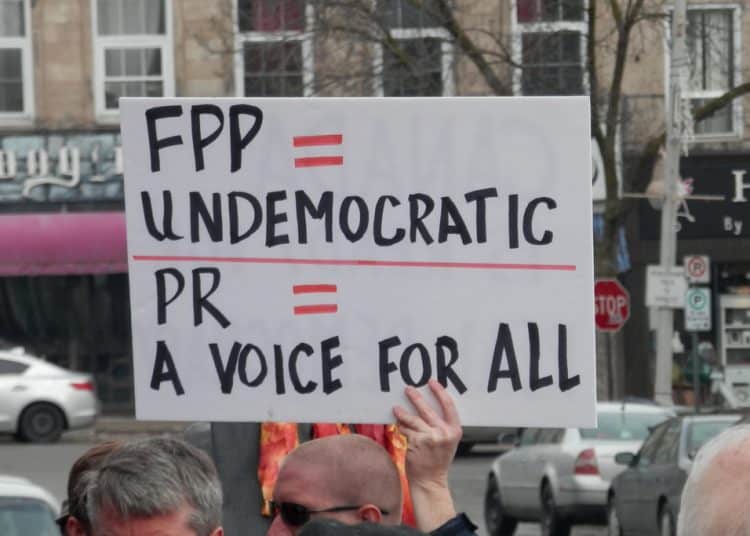 Imagine an island nation on the edge of a continent. The country is in the throes of a grave political and social crisis. Trust in politics has frayed, the people have lost faith in their leaders. Successive governments have repeatedly broken their electoral promises. The voting system is outdated, dominated by a duopoly that cannot be unseated, so the system is self-perpetuating and averse to change. Many citizens see no point in voting because the sitting candidate in their constituency has a big majority and their votes don’t count. So the people’s disaffection only grows and the crisis festers.

There are two possible outcomes. In one case, unscrupulous populist leaders manipulate the population, playing on their fears and phobias, their discontent with the present and their nostalgia for past glory, thrusting the country deeper down a one-way street to isolation and conflict with its neighbours.

In the other case, an independent, credible body puts forward a proposal to reform the electoral system, civil society activists campaign, and the people vote to change the electoral law to bring in a fairer form of representation that refreshes and reinvigorates political life.

We all recognise the former. The latter is New Zealand-Aotearoa, which shares so much history and so many values with the UK. Yet a two-party duopoly characterised the situation there too. How the people of that South Pacific archipelago succeeded in switching to proportional representation (PR) is a story worth hearing.

At Pro Europa’s invitation, Professor Andrew Geddis of Otago University’s Faculty of Law recently outlined New Zealand’s path to PR and its impact on political life in that country.

A crucial background factor explaining New Zealand’s move to PR was the severe breakdown in trust between the electorate and the politicians. This bears some similarity to the disaffection of many UK voters with their political class and the revolt against the ‘elite’ that led to the Brexit vote.

In Aotearoa voter dissatisfaction had deep roots. Following World War II, the ‘winner takes all’ effect of first past the post (FPTP) meant that 97 percent of all seats went to the duopoly while their share of the vote dropped to 70 percent. The lack of fairness of the electoral system became more glaring when the Labour opposition received more votes in 1978 and 1981 but fewer seats than the National Party. This loss of trust was exacerbated in the 1980s when Labour governments introduced far-reaching economic reforms – ‘Thatcher on steroids’, in Professor Geddis’s words – and when the National Party subsequently won the elections on promises to calm the pace of reform but actually intensified it.

The failure of both major parties to keep their promises focused the electorate on a voting system that excluded other parties. Public disenchantment with the parties of the duopoly eventually reached such a pitch that the National Party ended up promising a referendum on PR, a promise that they actually kept.

New Zealand’s transition to PR was brought about successfully for a number of reasons.

First of all, the change had been well explored and indeed recommended at an authoritative level. A Royal Commission, set up by a Labour government and comprising a number of eminent non-politicians, had come out decisively in favour of MMP, much to the chagrin of the government, which therefore did its best to bury their report.

However, as public clamour for change grew ever louder, the report provided a focus for a well-organised campaign in favour of PR, which fell in behind the Royal Commission’s advice to switch to MMP. A number of key personalities either supported PR or stood by their promise to hold a referendum, even where they were personally against changing.

A further important factor was that there was a rational, sensible procedure followed for consulting the people. This entailed an initial consultative referendum to ascertain support in principle for PR, which sparked a national debate on the alternatives. This was followed by a second referendum to choose between the public’s preferred form of PR (MMP) and the status quo (FPTP). The legislation for MMP was adopted prior to that referendum and was ready to be implemented automatically, if and when the people chose MMP.

Lastly, there was an energetic doorstep-style campaign by grassroots activists to explain in detail the pros and cons of MMP and FPTP during the second referendum.

Comparisons with the UK Brexit referendum

This sensible procedure contrasts markedly with the UK’s experience in the Brexit saga.

New Zealand’s move to PR involved an in-depth assessment of the advantages and drawbacks of different options, widespread information campaigns and debate, and two referendums – the first, indicative consultation on the principle of change and preferred type (85 percent in favour with 70 percent for MMP despite low turnout at 55 percent) and the second, binding referendum offering a straight choice between MMP and FPTP (won by 54 percent with 85 percent turnout).

In the UK, understanding of the EU was sketchy and the referendum procedure was botched: a single consultative referendum was held without any requisite quorum or threshold for change. The campaign was marred by disinformation and spending infringements, but because it was merely consultative, it was not struck down. Yet the main parties undertook to abide by the result, despite the slender majority for leaving across the UK as a whole, and the significant majorities for remaining in Scotland and Northern Ireland.

Politics in New Zealand since PR

So how has PR affected political life in Aotearoa?

First, trust in politics has improved even though it has become more complicated with multiparty governments the norm. The former duopoly subsists, tempered by the entry of small parties. A broad left-wing bloc opposes a broad right-wing bloc. In the middle sit a number of centrist parties, and notably New Zealand First. This populist party is led by a consummate politician, who, says Geddis, “campaigns in poetry and governs in prose”. In other words, while he makes bombastic claims during elections, once in power he acts prudently.

These multiparty governments do not constitute formal coalitions, but involve confidence and supply arrangements with agreements on the issues on which they support the government and latitude to vote as they please on other issues.

Secondly, these governments have turned out to be stable, because the voters punish MPs who overplay their hand. Only once have early elections taken place since the introduction of MMP.

In conclusion, under MMP, government policy is closer to what voters think. And while multiparty discussion slows down procedures, this may actually be a good thing in New Zealand, where legislation was often adopted rather too hastily in the past. Yet parliament can move fast where needed, as shown by Covid-19 legislation, adopted within the space of a week.

A tradition of welcoming democratic and social reform

The confirmatory referendum held in 2011 showed that people in Aotearoa are generally happy with the MMP electoral system: the majority in favour of retaining MMP rose to 58 percent as against 54 percent in the 1993 referendum. That is not to say the current system couldn’t be improved; the 5 percent threshold for representation may be too high since no new party has managed to break through and the impact of voting in marginal seats is ticklish.

Like the UK, New Zealand has no codified constitution, and it inherited the Westminster style of Parliament and the FPTP system, albeit minus a second chamber. But it also has a tradition of progressive democratic and social reform. It was the first country to grant women the vote (in 1893), it was a forerunner (along with Sweden) in introducing a comprehensive welfare system, and it is the first, perhaps the only, former colony to institute land tribunals to examine the longstanding grievances of the indigenous population at the loss of their ancestral lands and their fishing and other rights. So perhaps it is not surprising that it managed to change peacefully and democratically from FPTP to PR.

Time for change in the ‘Mother of Parliaments’?

The UK is an old and respected democracy that boasts Westminster as the ‘Mother of Parliaments’. Yet its reputation for wise governance has been dilapidated and its capital of trust squandered by the present leaders. Many people in this country do not engage with politics at all, and those who do are highly polarised, a situation made worse by our FPTP system.

It is true that, unlike the UK, Aotearoa is a young and agile country, which makes the introduction of change an easier undertaking. But all recent experience suggests that the UK’s cloak of tradition is now grown quite threadbare, and so the time is surely ripe to demand a fairer, more democratic electoral system that delivers better-conceived policy and more civil political debate. The example set by New Zealand is one that could and should be followed here.

And in the battle to reset British democracy, to refresh our country’s democratic credentials, as Aotearoa has shown us, grassroots activists can play a pivotal role.

The full session with Professor Geddis can be viewed here:

Hector McGillivray is a citizen of nowhere who found a home in Europe. A retired European Commission official who worked as a translator and speechwriter, he has ended up in Brussels like flotsam washed up from those far-flung corners of the British Empire that were never flung far enough.