States should boycott the Beijing Winter Olympics; the country is guilty of all five acts of genocide and we must take a stance against them. 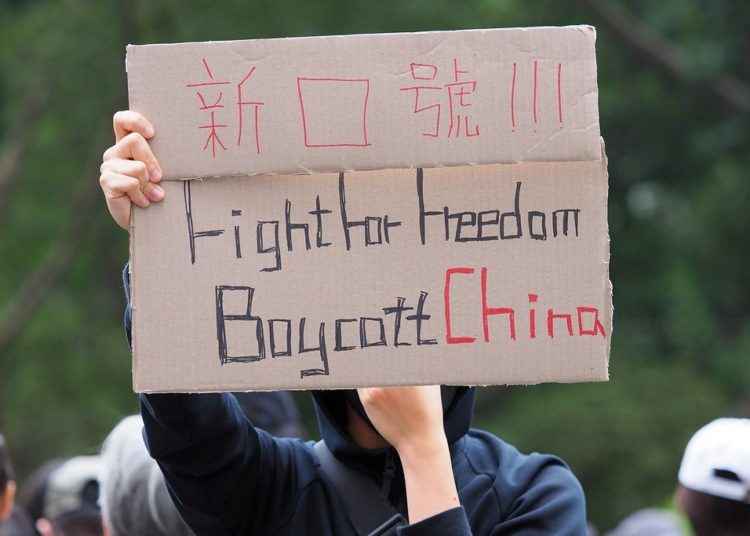 Correction: the article originally stated that the China Tribunal estimated the number of murdered prisoners at between 60,000 and 90,000 so far. In fact this figure is per annum.

The recent publication of Amnesty International’s human rights report once again focuses on the appalling situation in China. The European Union should put the ruling party in Beijing on notice that if the regime does not conform to international standards, Europe will mount a political boycott of the 2022 Beijing Winter Olympics, similar to the boycott of leading EU figures which we organised for the 2008 Beijing games.

“Despite constitutional provisions and its international commitments and obligations, China continued its unrelenting persecution of human rights defenders and activists. Throughout 2020, they were systematically subjected to harassment, intimidation, enforced disappearance and arbitrary and incommunicado detention, as well as lengthy terms of imprisonment. The absence of an independent judiciary and effective fair trial guarantees compounded such recurrent violations”.

Amnesty rightly singles out the human rights defenders, lawyers and activists who have bravely represented China’s persecuted peoples including Tibetans, religious groups and most recently the Muslim Uyghurs, earning China the definition – at last – of genocide.

Genocide against the Uyghurs in China

As the US State Department cryptically referred to genocide against the Uyghurs and religious and ethnic minorities in its annual report on human rights more detail was shed by an NGO. “China’s abuses of the Uyghurs in Xinjiang violate every article in the United Nations’ definition of genocide”, says a 55-page report published in March by a foreign policy think-tank based in Washington.

The report ‘The Uyghur Genocide’ confirms that the Chinese authorities created a massive network of internment camps in Xinjiang purportedly for ‘re-education’ and ‘terrorism prevention’.

In reaction to the oppression of the Uyghur minority, the EU has imposed sanctions on China. The foreign ministers of the 27 member states approved punitive measures against four Communist Party representatives in the Uyghurs’ region and the management of the camps.

However, these camps are only the latest in decades of repression of various groups, with around seven million held and tortured daily in China’s re-education through labour (RTL) system.

In 2018 I gave evidence to the China Tribunal in London, organised to hear evidence of torture and worse in China’s network of camps. It was chaired by Sir Geoffrey Nice QC, (one of a handful of Britons sanctioned by China alongside five MEPs recently) which also heard from a doctor who had removed organs from live Uyghur prisoners.

I have met hundreds of witnesses – in China and in exile – to the heinous but widespread practice of organ harvesting from live prisoners, organised by the Peoples Liberation Army across China. The China Tribunal estimated the number of murdered prisoners at between 60,000 and 90,000 per annum.

The organised slaughter started with those under the death penalty, but in 1999 the regime began a systematic persecution of Falun Gong adherents: at over 100 million, Beijing believed them to represent a political threat.

These harmless individuals became a quarry for the booming transplant business, because they neither drink nor smoke. And like the Tibetans and Uyghurs, who are similarly healthy, they are the only prisoners to be routinely tissue-matched for death as involuntary organ donors.

Guilty of all five acts of genocide

In 1948, the UN Genocide Convention designated five acts that would constitute genocide. According to the US report, China – a signatory to the genocide convention – has committed all five acts.

I had been a frequent visitor to China and Hong Kong while I was vice president of the European Parliament responsible for human rights and democracy, but my visit to Beijing in 2006 was my last because I was under surveillance as I encountered the barefoot Christian lawyer Gao Zhisheng and other reformists for the first time.

Gao had made waves by conducting an investigation into the persecution of religious groups in China during 2005, and had been intimidated in a staged traffic accident by the regime after meeting the UN’s torture rapporteur, Austrian jurist Manfred Nowak at the US embassy in Beijing.

Nowak concluded that some two-thirds of the prisoners held under RTL at the time were Falun Gong adherents. Gao Zhisheng – sometimes known as the conscience of China – suffered long periods of imprisonment and torture and was sent to internal exile with his brother in 2017.

I regret to inform readers that Gao’s wife and children, who escaped to the USA, have heard nothing from him recently. His wife wrote to me for this article:

“I think Europe has really learned about the Chinese regime. I hope they can know that the persecution still exists, against people like Gao Zhisheng who have been making efforts to change China for the Chinese people.”

Edward McMillan-Scott was a pro-EU MEP for Yorkshire & The Humber 1984–2014. He was a Conservative until the party’s split from the EPP in 2009, then protested and sat as a LibDem until 2014. He was elected a European Parliament vice-president four times 2004–2014. He is a patron of the European Movement UK and was a leading member of the People’s Vote campaign for a second referendum on Brexit. He is persona non grata in China and on Putin’s visa blacklist.

Edward was a pro-EU MEP for Yorkshire & The Humber 1984–2014. He was a Conservative until the party’s split from the EPP in 2009, then protested and sat as a LibDem until 2014. He was elected a European Parliament vice-president four times 2004–2014. He is a patron of the European Movement UK and was a leading member of the People’s Vote campaign for a second referendum on Brexit. He is persona non grata in China and on Putin’s visa blacklist