Dr Pam Jarvis unpacks how Boris Johnson has attempted to gaslight and coerce the nation over the pandemic, making us question our own reality. 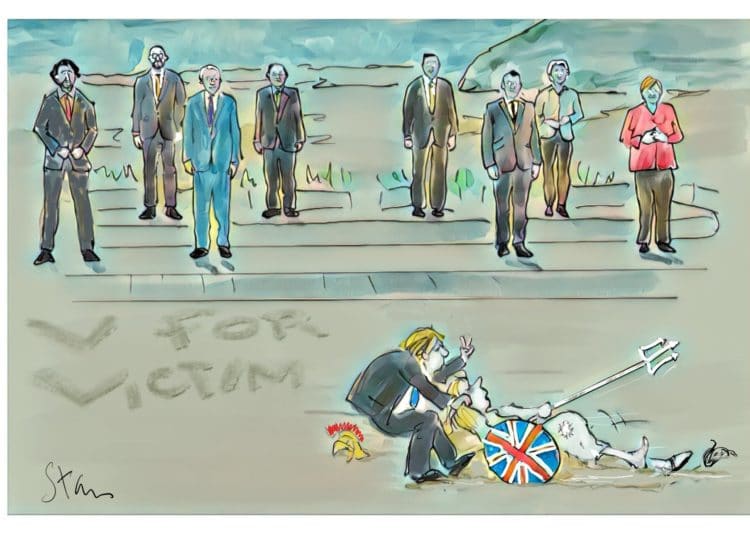 British people may have missed this short, impassioned speech from German MEP Terry Reinke, delivered in the European Parliament, but it is a very pertinent view of why the UK position seems so baffling to outsiders looking into the relationship the British people have with their government.

Reinke states simply that Boris Johnson has been lying to the British public, and gives as examples his initial promises that leaving the EU would allow the UK to spend an extra £350m a week on the NHS, that there would be no customs checks at the Northern Ireland border and, in 2019, that he had an ‘oven ready deal.’ She concludes, very logically, that Brexit is a mess for which it will not be easy to find a solution, but that it would be possible if Johnson stopped blaming others for his actions and took responsibility for the situation.

Stated this starkly and succinctly, it all seems very reasonable. But how did the British people get into a position in which so many of them had such an unswerving belief in this man and his regime? A somewhat obscure psychological theory can help us begin to understand how we entered into such a dysfunctional relationship, in which the public are continually coerced and deluded.

Coercive control is a concept that was first used to describe dysfunctional personal relationships. It is a form of psychological manipulation calculated to exploit, control, create dependency and dominate. It can rely on a process that is commonly referred to as ‘gaslighting’ – coercing a victim to question their own judgments or memories of a situation, replacing them with ones the abuser prefers.

Victims of gaslighting commonly feel a dip in confidence, blame themselves when things go wrong, and start to rely on the abuser to make decisions about their lives. They frequently apologise to the abuser to avoid confrontation, because they have learned that questioning an abuser’s constructions of reality would be most likely to lead to an interaction in which the victim is made to feel even less confident in their own perceptions than they did before. As time goes by, they are coerced to hand over much of the control of their thoughts and actions to the abuser.

The exposure of this process has been revolutionary in how victims are supported in domestic abuse cases, particularly those in which physical violence seldom occurs, and few outward signs exist of the process. Whether or not physical injury is part of the situation, relentless coercion is psychologically destructive not just to adult partners but to children in the house who are immersed in the ongoing situation, and who may also be subject to coercive control by the dominant adult. The ‘power and control’ wheel has been developed as a tool to analyse such relationships.

These ideas are now slowly making their way over into the sociological sphere, to describe the subtle ways in which governments – populist ones in particular – use mass and social media to spread messages in ways that not only emphasise and re-emphasise the demands of politicians, but also co-opt the general public into the campaign.

For example, feminist sociologists have found that ‘Mummy Blogging’, which has developed a populist construction of so-called ‘yummy and slummy mummies’ has fanned the flames of mothers’ fear of being negatively judged by others. This mass concern amongst mothers about being negatively judged has strongly resurfaced in the recent Kensington Palace ‘5 Big Questions’ research findings.

Populist political persuasion is marked by its use of emotionalisation, simplification, and negativity. This is not new in political campaigning, but the ease by which it is communicated through social media has hugely increased its efficiency. It is embodied by the way that Twitter has been, and is still being, used by outgoing US president, Donald Trump.

Politicians like Trump may personally engage in this process; they may also encourage other ‘Populist political actors’  within social media to assist them by raising powerful emotions such as fear and resentment about an individual or group; for example blaming ‘selfish’ parents for child hunger, and ‘lazy’ teachers who are not in school during lockdown for issues that have arisen relating to education during the pandemic.

As a message permeates, so increasing numbers of the public become outraged and join the onslaught. Those who fit the characteristics of a vilified population are then pilloried, becoming rabbits in the headlights of mass social disapproval.

The British government has used this process very skillfully to avoid accepting responsibility for their poor handling of the covid situation, taking every chance to pass the blame back to the public for the rapid spread of the disease. The situation in which education currently finds itself is an excellent example.

A few days ago, the Independent SAGE group produced a plan for Safer Schools in association with the EAGLE Research Group, of which I am a member. The Zoom launch for the document laid bare coercive control techniques that the government has exerted on teachers and parents over the last few months.

One speaker concluded that “in the summer, the government abandoned the schools and said to parents and teachers ‘make your schools safe’”- without giving them the means to do so. Very little extra funding has been provided to schools for covid measures over the term that is currently in its final month.

And now, the statistics quoted in the Independent SAGE briefing indicate that pupils are the most infected demographic group in the country. It was also proposed that it is highly probable even higher numbers are infected and asymptomatic, while still at risk of transmitting the disease. Nevertheless, ministers have declared that teachers are not an ‘at risk’ group, while the Independent SAGE analysis of the same data indicates that they are equally or even more at risk than care workers.

The Eagle Research Group representative also voiced concerns over anecdotal reports of families with vulnerable members being threatened with fines, or having their children removed from the school roll if they keep them at home. This presents parents with a set of apparent choices that all lead to harmful results; a typical situation set up by an abuser for a victim of coercive control.

At the same time, the website ‘My Little Crony’ lays bare a stunning web of abuse of public funds by ministers for personal and political gain; yet another symptom of an abusive relationship – depriving the victim of money and using it for the personal advancement of the abuser.

In the last few days, the government has launched its latest coercive efforts to create a framework for public blame to fall upon schools and parents for the impact of decisions it is now making.

The Department for Education has refused to allow head teachers to create rotas that could reduce the number of children in so-called ‘bubbles’. This has been an ongoing concern to teachers, with many secondary staff currently reporting their school creating year group bubbles that contain 200+ teenagers, with no thought given to the fact that some will have siblings in other year groups.

Schools have additionally been instructed not to close early for Christmas. This means children will not be able to quarantine before mixing with vulnerable family members over the five-day Christmas period in which covid restrictions will be relaxed, even though the government’s own SAGE committee has warned about the dangers of such a policy.

There are many features of coercive control that are relevant here – power, control and threats. The whole picture is of that of a government that provides ‘fig leaf’ policies that they can point to when things go wrong, blaming poor distancing practice in schools and families for a potential third wave in mid-January. This is a typical gaslighting technique: ‘It’s all your own fault because you didn’t do exactly what I told you to’, even though the victim was presented with impossible choices, all of which would lead to them to some kind of harm that the abuser could have helped them to avoid.

And, populist governments have a subsequent technique to call upon to fix the victims in a state of coercive control: ‘dog whistling’ to the tabloid press to trigger a cascade of public censure, which in this situation will be a set of individual examples of so-called ‘covidiots’ apparently responsible for the spread of the disease.

The education sector should not feel singled out in this respect. The same treatment has been meted out to civil servants, to university students and to the public in general. For example, Matt Hancock recently implied that Cornwall, the Isles of Scilly and the Isle of Wight must have better behaved residents, given that they were the only area allocated to Tier 1 under the new rules. Yet he failed to mention the different situations in crowded towns with tightly packed populations to those that exist in rural areas where people do not live in such tightly packed conditions; a point which was strongly taken up with him by urban Labour MPs.

When victims are helped to understand the process of coercive control, their awareness is raised and they become more able to remove themselves from the situation; it is as though the abuser’s spell has been broken. Terry Reinke has now attempted to act as our “fairy godmother” in this respect. Although we may initially resist (as is very typical in individual cases when outsiders first try to intervene), we would be wise to stop, listen and consider.

The gross abuses of this highly coercive government must be brought into the light and challenged, before our democracy is broken beyond repair.