Twitter’s verdict on steps to end the lockdown was swift and brutal. ‘Tory voters - at the next election - Stay home-Protect the NHS’. 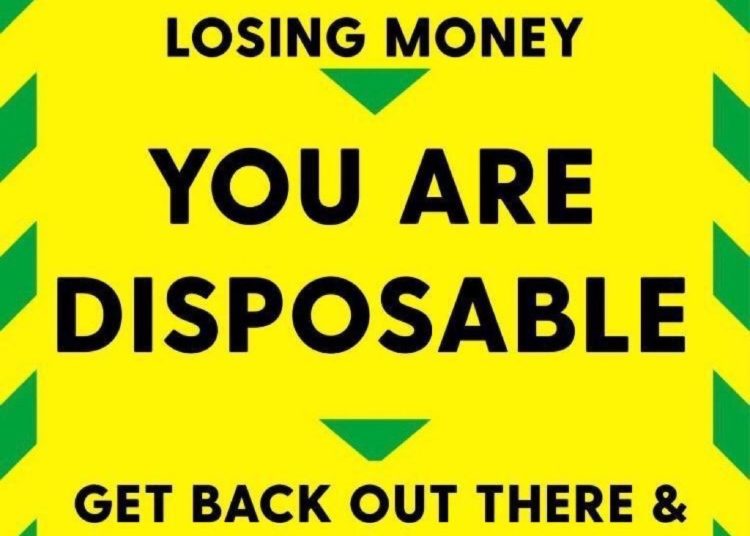 Twitter’s verdict on steps to end the lockdown was swift and brutal. ‘Tory voters – at the next election – Stay home-Protect the NHS’.

Matt Lucas summed up the ‘go out but not out out’ message as he mimicked the squeezed vowels typical of Johnson’s speech.

Quips scoffed at “an entire cabinet of Graylings”, fiddling with the “where is Boris App” and asked “after Covid, what is the point of the Conservative party?”  Others pounced on the disintegration of the UK, thanking God that health in Wales was a devolved responsibility and that Johnson had become prime minister of England only.

Taking back control of the borders was turning out not quite as the Conservatives had imagined. Not only had France forced the UK to lockdown weeks ago, on pain of the French border being closed to the Brits, but Twitter quickly turned a joke – an Englishman goes into a pub; a Welshman, an Irish man and a Scotsman stayed home – into news: Scotland urged to police borders to keep the English out.

Plenty praised Sturgeon, begging for her to become prime minister of the UK. Many were convinced that Johnson’s lockdown plan proved that there wasn’t a crisis he couldn’t make worse. Thatcher, said the twitterati, “was a bitch, but she was a scientist bitch”, who may just have conceded comedienne Janey Godley’s point. “If schools can’t stop nits how can they stop Covid?”

New memes assumed the role of vicious government notices: We would rather you die than tax the rich. Back to work. Catch the virus. Save the billionaires. More chillingly: We don’t need Cummings to tell us to stay alert after zipping a teenager into a body bag.

Banksy’s boy playing with a super hero nurse captured the mood: frontline workers were not so much heroes as pitiable cannon fodder for a cynical or clueless cabinet.

Ministers came in for drubbing all round: excess mortality rates relative to other countries; skewed figures; an inability to count and compare actual death tolls in care homes; PPE; ventilator orders placed and withdrawn; lab testing contracts not put out to procurement but handed to a foreign interest whilst surplus lab capacity in the UK was overlooked. The deaths of frontline staff shocked all. Figures from the Office for National Statistics pointing to disproportionate deaths among certain ethnic groups, construction workers and the low paid drew more ire: Boris is culling you.

A tweet from Have I Got News for You caught the mood: government surpasses 100,000 day testing by successfully testing the patience of 66 million people.

Disbelief and shame at the UK’s lamentable record grew into despair and defiance. Concern over UK testing and lab capacity being furloughed or ignored, as reported by the Indy and Huffington Post was lampooned by The Mash Report.  Tweeters praised Piers Morgan for probing questioning of government spokespersons and applauded him putting his phone on speakerphone to ‘overhear’ a Minister on another channel who had refused to appear on Good Morning Britain.

Sir Keir Starmer didn’t escape voters’ exasperation at his low-key style and his refusal to ask for an extension to the transition agreement in the face of horrific death rates. However, the government’s new message was the last straw. Seen as crass, delusional and duplicitous in turn, ‘Writer in Pyjamas’ put it this way: “It’s like one of those riddles. You get a sudden instruction to go to work. Your office is 25 miles away. You may not use public transport. Your garage contains a pogo stick, space hopper and two skateboards. What do you do?”

Twitter’s answer came in calls to practise social distancing from anyone displaying symptoms of Conservativism even after the lockdown is relaxed, and stay at home until parliament looks like a chamber crammed to the rafters with MPs awaiting the result after the division bell. Lamenting the absence of former speaker John Bercow has become another Twitter target but for now Twitter is destroying ministers’ dissembling statements and asking why the UK has not been invited to join the smart Covid management group of Australia, Austria, Czechia, Denmark, Germany, Greece, Israel, New Zealand and Singapore.

The biggest fear? Unless comprehensive, immediate effective testing and containment are implemented, lockdown will have been pointless. To all intents and purposes, this is #HerdImmunityPhase2.

Hauliers: Transition period “must be extended”

Hauliers: Transition period "must be extended"