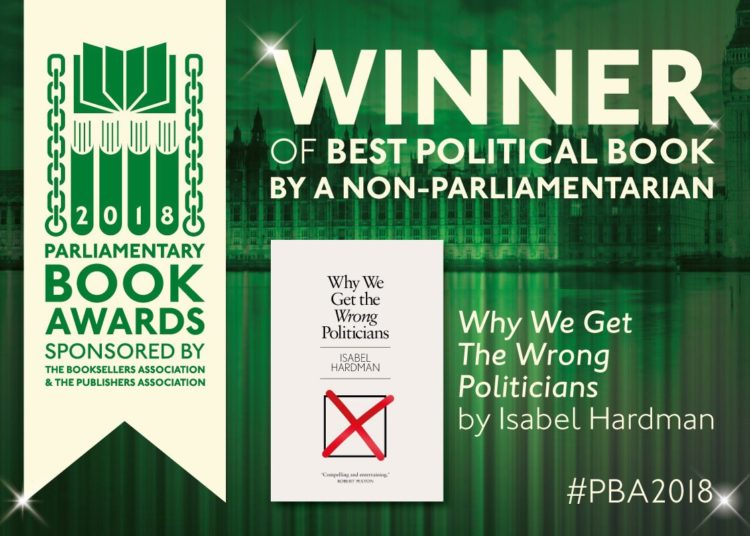 Cover of Isabella Hardman's "Why we get the wrong politicians"

Nigel Evans is a Conservative MP who was also a deputy speaker in the Commons. This latter position meant that he didn’t vote on various bills that passed through the Commons, such as the legal aid, sentencing and punishment of offenders (LASPO) bill. And he soon became badly caught out by the bill, once enacted.

Evans was charged with rape and serious sexual assaults and stood trial. He was acquitted on all charges but then found himself faced with a £130,000 legal bill. In earlier times his expenses would have been covered by legal aid, but LASPO had (as the coalition government had intended) restricted access to legal aid and Evans now found himself on the wrong end of the new legislation.

Scrutiny, or non-scrutiny, of legislation

Not just the legal profession but informed commentators generally were highly critical of LASPO (it has subsequently been amended). In Why we get the wrong politicians, Isabel Hardman explains that “it is still a bad law because it is doing what ministers promised it wouldn’t”. And the fault lies with poor parliamentary scrutiny.

A major theme of this insightful book is that the House of Commons is very poor at scrutinising legislation. Before a bill becomes law, it is twice debated in the Commons. In between, the bill goes to one of the bill committees, which go through the proposal line by line. Whilst MPs from various parties make up these bill committees, there is always a government majority and government members are ‘whipped’ to do as the government tells them.

The work of these bill committees is an exercise in futility and MPs have been known to use their time there to write Christmas cards or answer constituents’ letters. Being put on a bill committee is viewed as punishment handed out by party whips.

One MP confided to Hardman: “Scrutiny on legislation here is very bad; the whole thing is theatre.” Prior to being elected a Labour MP, Wes Streeting had been in favour of reform of the House of Lords, making it more democratic. As an MP he has changed his mind, having seen poor scrutiny in the lower house. He says:

“I think the Lords is much better for scrutiny than the Commons. Patronage [in the Commons] is so strong and the executive dominates. We don’t really have time to look at legislation. We don’t take ourselves seriously as legislators.”

Apart from LASPO, Hardman lists six other areas where scrutiny of legislation failed and fundamental problems emerged only subsequently. These include the switch to the community charge (poll tax) under Margaret Thatcher, and the Dangerous Dogs Act, described by Hardman as “ineffective legislation rushed through in order to be seen to be doing something”.

The executive (government) controls business in the legislature (Commons) and Hardman gives examples of both Conservative and Labour administrations acting with hubristic arrogance. In 2017, the fire at Grenfell Tower claimed over 70 lives. A previous fire in 2009 at Lakanal House had resulted in six deaths, and it is acknowledged that there were important lessons to learn. Backbenchers on the all-party group on fire safety wrote to the government in 2014 expressing concern that not enough was being done. But their report was batted away by government. The tragedy of Grenfell was a consequence.

Many would say the problem of poor scrutiny in the UK arises because we do not have a separation of powers. In the US, Congress constitutes the legislature and the president and cabinet constitute the executive. In the UK by contrast, the executive is drawn from members of the Commons and to a lesser extent the Lords.

Between 15 percent and 20 percent of MPs are on the government payroll, and most have extra income and certainly prestige. All 650 MPs are elected primarily as legislators, but for the more ambitious the temptation (well described by Hardman) is to seek to become a minister – or beyond. For the ambitious, scrutiny is a chore to be avoided.

Would the UK do better to move to a constitution that separated out the executive from the legislature? The arguments in favour are strong, but Hardman produces counter-arguments that give pause for thought. As an alternative, Hardman suggests a change that would see bill committees merged with the existing crop of select committees.

Each select committees covers a specific subject area, such as education or health and social care. These committees have significantly more prestige than the bill committees. Membership of select committees is determined by MPs voting among themselves (rather than being appointed by whips). An established ethos means that members leave their party hats outside the meetings and, in contrast to bill committees, they are served by a small staff.

Having proposed legislation scrutinised by the ‘Hardman hybrid’ would mean that experts in that area, who are not under pressure from the whips, would give a bill a much more thorough review.

How are party candidates selected?

Hardman begins her book by looking at how parties select their candidates prior to an election – and how people put themselves forward for selection. It is a shocking fact that if you wish to engage in a proper fight for a seat in parliament, it’s going to cost you money. Research shows that, even ignoring any loss of income, the average cost to a candidate personally is between £20,000 and £25,000. And in any one constituency, there is only ever one winner.

Hardman interviews candidates who fought hard for months but came up short. For many of those who failed, it was an incredibly hard knock to take. Not untypically, one woman admitted to crying every day for the next three months. Elections are tough and whilst you might have been a very diligent MP seeking re-election, if the swing is against your party nationally you are out on your ear.

In the 1950s, the Conservative Party boasted 2.8 million members. Today that number is 140,000, with a high proportion of them being retired and with a political philosophy drawn from The Daily Telegraph and the Daily Mail. In selecting a Tory candidate, there is an inbuilt bias in favour of straight men who are happily married with a family, in their early forties, and wear a suit. Misogyny rears its head here and in other parties. With the financial hurdle mentioned above, our system ends up drawing candidates from too narrow a pool.

There are other disincentives to offering yourself as candidate. Why put yourself forward, when this is likely to lead to close scrutiny of your social media accounts? Even if you’ve not been previously indiscreet, the trolls will get you as you progress your campaign, and more so if you enter parliament. “No wonder”, comments Hardman, “parliament does not look like the rest of the UK”.

Chapter 5 is headed ‘Getting Caught’ and Chapter 6 ‘Getting Ill’. In the former, the writer takes us through the expenses scandal of 2009 and the number of illicit sexual affairs that take place in Westminster. ‘Getting Ill’ deals with the twin troubles of alcohol addiction and the pressures that lead to mental illness. A wise person potentially considering candidacy might well be put off by the huge damage life at Westminster can do a spouse and their family life.

Hardman deserves credit for dealing with these issues with great sensitivity and compassion. She has interviewed an impressive number of MPs, both on and off the record. It is not that she lightly dismisses failures, but rather that with her wide understanding of Westminster she is able to contextualise.

In ‘Getting Out’, Hardman records her visits with sitting MPs to their constituency surgeries. It is perhaps testimony to her reputation within parliament that this includes sitting in on a surgery with David Cameron. One constituent visiting Cameron was a solicitor who was able to explain in detail the damage that LASPO was causing. Only in his surgery did the scales fall from Cameron’s eyes and the task began to rectify the Act.

All visits to surgeries carried the same story – of constituents whose lives were being badly messed up because of the unintended consequences of badly drafted legislation. After surgeries, MPs spend an inordinate amount of time trying to correct the costly errors resulting from poorly scrutinised legislation. Hence Hardman’s contention that better scrutiny would head off damage in the first place.

Hardman recalls her various meetings with Jo Cox and how much the MP for Batley and Spen impressed her as a force for good. Our MPs often pay a high price for us – none more so than Jo.

It’s worth noting that MPs devote a significant proportion of their time to constituency casework, meaning that other activities are crowded out. Hardman points out that in the 1950s it was not uncommon for MPs to visit their constituency only once per month if that. Today, MPs have become glorified factotum social workers.

Hardman might have made the point that if government in the UK had not become so over-centralised then some of the casework coming to MPs might be easily dealt with at local government level.

Can I recommend this book? Unhesitatingly. It has been meticulously researched and is wide ranging. It is thoughtful and practical in its suggestions. But perhaps above all, it is its humanity.