Be the change you want to be. 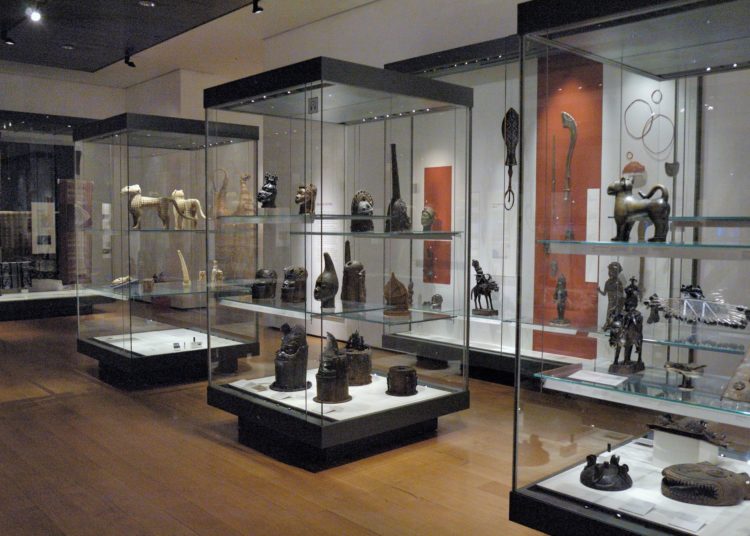 On 2 Jan 1897, James Phillips, a British official, set out from the coast of Nigeria to visit the Oba, or ruler, of the Kingdom of Benin. News reports at the time said he took a handful of colleagues with him and it is assumed the purpose of his journey was to persuade the oba to stop interrupting British trade in the region.

When Phillips was told the Oba couldn’t see him because of a religious festival, he went anyway. He didn’t come back.

For the Kingdom of Benin the killing of Phillips and most of his party had huge repercussions. Within a month, Britain sent 1,200 soldiers to take revenge. The Benin punitive expedition, commanded by Rear Admiral Harry Rawson, was instructed to torch the city. On 18 Feb, British forces took Benin City; they also took the opportunity to loot the city of its artefacts.

The various artefacts we now call the Benin Bronzes – which amount to 3,000 items scattered worldwide – may be a huge underestimate of the number of looted artworks. You can find examples of these treasures in the British Museum, and the Metropolitan Museum of Art in New York. They’re in smaller museums too: the Lehman, Rockefeller, Ford and de Rothschild families have owned some, as has Pablo Picasso.

This is now about to change.

The Benin Royal Family and the Nigerian national governments plan to open a museum in Benin City in 2023 with at least 300 Benin Bronzes. The pieces will mainly come from ten major European museums, including the Humboldt Forum in Berlin, the Weltmuseum in Vienna and the British Museum. They will initially be loaned for a period of three years with the possibility to renew. It is hoped that the new museum will become a cultural centre celebrating African art and culture. Godwin Obaseki, the governor of Edo State in Nigeria, home to Benin City said, “I want people to be able to understand their past and see who we were.”

It remains to be seen whether the Benin project, which is dependent on loans of artwork made in Benin, will satisfy Nigerian activists who have long campaigned for the return of the Bronzes to their country of origin. Likewise, there has been considerable global support for the Black Lives Matter movement following the murder of George Floyd and this has included expressions of solidarity from many museums around the world. The loan of stolen artworks back to their original owners may simply not be enough.

Professor Dan Hicks, a senior curator at the Pitt Rivers Museum in Oxford, is a leading voice among museum professionals calling for the return and restitution of contested cultural objects. He points out that the most problematic artefacts are those that were stolen: looted or removed by the British from their place of origin, where local people had been subjugated. “In this country you’re never more than 150 miles away from a looted African object” he states.

The UK’s museums receive restitution requests from around the globe but it is those from Africa that are coming under the greatest public scrutiny.

“We need to think very hard about objects from Africa, where it is clear they were taken as trophies of war. However you rewrite the labels and retell the history, you’re not going to be able to tell a story other than one about military victory. In those cases, we need to work towards a restitution process.”

Of the Benin Bronzes Hicks comments, “It is a matter of respect and being treated equally. If you steal people’s heritage you’re stealing their psychology, and you need to return it.”

Not everyone involved in the museum world agrees.

Hartwig Fischer, director of the British Museum, doesn’t believe the ownership of the artwork should be transferred back to Nigeria. He thinks a better way forward would be for a close collaboration between the British Museum and its counterparts in Nigeria, to whom he would loan the Benin Bronzes for long periods of time. He recently published the following statement on British Museum’s website:

“The British Museum stands in solidarity with the Black community throughout the world. Black Lives Matter.”

The British Museum was founded on the collection of Sir Hans Sloane, a man whose great wealth came mainly from a slave plantation in the West Indies. He accrued in excess of 71,000 objects during his lifetime. When he died these objects became the basis of the British Museum’s collection and that of the Natural History Museum of South Kensington. Of the museum’s origins, its current director Fischer says,

“The historical fact we have to deal with is that slavery has been an integral part of the European economy for centuries. That is something that needs acknowledging and it needs to be addressed.”

Sara Wajid is head of engagement at the Museum of London and a member of Museum Detox, a network of people of colour who work in museums. She says there is very little diversity in senior positions in the UK’s cultural institutions:

The British Museum, which Fischer describes as a museum of the world, has no black curators among a curatorial staff of around 150. It is, he says, “a big issue we need to address.”

The message to Hartwig Fischer and others in similar positions of influence remains simple. Be the change you want to be. Use you influence, move the British Museum into the twenty-first century. By changing the dialogue and presenting British history from the viewpoint of the colonised as well as the colonisers, you could make it an even more interesting place to visit.