Joe Biden’s victory in the USA has been widely welcomed and may have a significant impact on current trade negotiations. 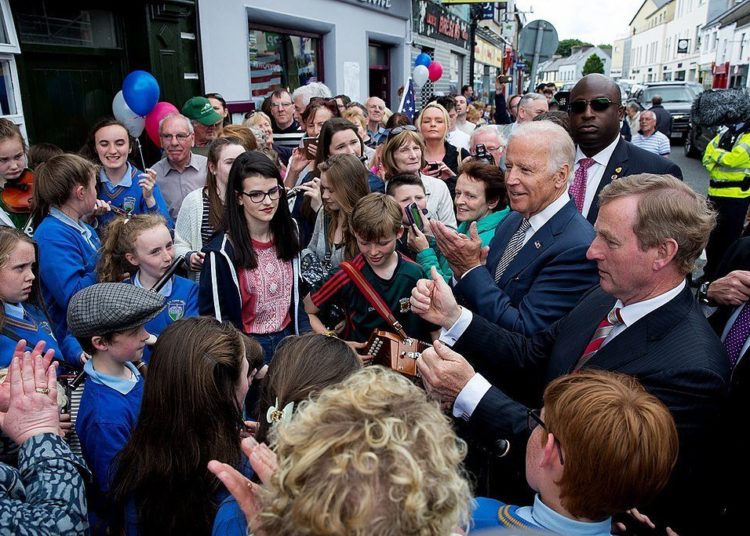 Joe Biden’s victory in the USA has been widely welcomed and comes at a crucial moment. It may have a significant impact on the current EU-UK trade negotiations. The president elect is no admirer of Brexit, or Boris Johnson the living embodiment of it, once describing him as a “physical and emotional clone of Trump”.

One of Obama’s former National Security Council advisers, Tommy Vietor, has referred to Johnson as a “shapeshifting creep” and according to The Sunday Times, vice president elect Kamala Harris “hates” him.

One of the main beneficiaries of the 2020 presidential election will be Ireland. The new president’s deep Irish roots can only increase Dublin’s pivotal role in the EU-UK trade talks, which resumed today in London. Time has run out and in the next seven days, very hard and unpalatable choices will have to be faced, not made easier by Biden’s win.

Johnson will shortly find himself as the grist between two giant mill wheels of international trade, with Ireland in control of grinding his Brexit illusions to dust.

But good news for Dublin is bad news for unionists and businesses in Northern Ireland.  Johnson will be forced to comply with the Withdrawal Agreement that he signed and which he is now trying to renege on. It will be a permanent hobbling of GB-NI trade that can only encourage Irish unification.

Tonight, the Lords are set to vote against the government’s controversial clauses in the UK internal market bill that break international law and override parts of the NI protocol. If this happens, according to DEFRA secretary George Eustice, the government will “immediately reinstate” the offending clauses. That would be extremely unwise. The Biden administration is likely to take a very dim view of such a move.

Michel Barnier’s briefing to ambassadors last week was quite downbeat, telling them he wasn’t sure that we are even on a trajectory to a deal. Back in London this morning, he tweeted:

Johnson’s options are narrowing fast. None are very appealing. This is where his mendacity and blind ambition has brought him. No deal would be the worst, plunging the UK into a major row with both the EU and the USA as well as torpedoing the British economy, which is struggling to stay afloat on a sea of debt, both private and public. Also, of all the EU economies, Ireland’s would be the most seriously impacted, something else Biden would hold against the prime minister.

Coming on top of Johnson’s disastrous mishandling of the coronavirus pandemic, voices now being raised in the Tory party would only grow louder. It would be an open goal for Keir Starmer.

On the other hand, signing a deal that ties the UK into EU laws by proxy, even through an international arbitration mechanism, would see the ERG absolutely incandescent.

Negotiating a deal that respects Britain’s red lines looks impossible. The EU will never concede on the level playing field (LPF) or on governance. These are fundamental issues for Brussels.

The LPF is the single market. It’s the set of rules and regulations governing not just food and product standards (which goods exported to the EU must meet anyway) but also tax, employment and social policies – so called flanking policies – that enable fair competition between countries while avoiding a so-called race to the bottom.

Of course, not all non-EU countries necessarily follow EU law – but neither do they have tariff and quota-free access to the single market, the only negotiable option in the time available. The EU does not have a such a free trade deal with any other nation and in any case, what we are asking for in many areas goes well beyond an ordinary FTA.

Brexit was a wilful, voluntary and permanent tilting of the LPF against Britain’s exporters, through all of the non-tariff barriers. If we exit without a deal, we can add tariffs to that.

So, in order to tilt things back in our favour the rules and regulations governing the UK’s own ‘flanking policies’ will need to be watered down, to the point where we can become reasonably competitive again.

And this is where the problems arise. The EU are determined that an ex member state cannot gain an advantage, and one has to ask why they should. It seems impossible this is going to happen, either in the next few days or ever. The best we can aim for is restoring the playing field to something like level – but at the cost of a permanent reduction in standards of employment and environment protection.

It’s hard to see how the average UK voter’s life will be improved by essentially paying for the extra regulatory and non-tariff barrier costs in a reduced quality of life. One might ask what the advantage is and whether it’s a fair exchange. British workers already work longer hours, enjoy less-secure employment, lower sick and out of work pay and lower pensions than many European workers. This is what gave rise to Brexit in the first place and is now set to become worse.

It’s not difficult to image life in Britain (or possibly just England at some point) after Brexit being not unlike a more benign version of East Germany, with workers looking enviously over the trade barriers at the higher living standards of people in the EU.

When that happens, the whole basis for Brexit and the catastrophic choices made by the Conservative party since the referendum will have to be reviewed.

But for this week, Johnson will have to choose the least bad option, and that is the deal the EU will offer us, whatever it is.