Is democracy in crisis? Marc Limon looks at how and why democracy has been eroded across the globe and considers the role that identity politics has played. 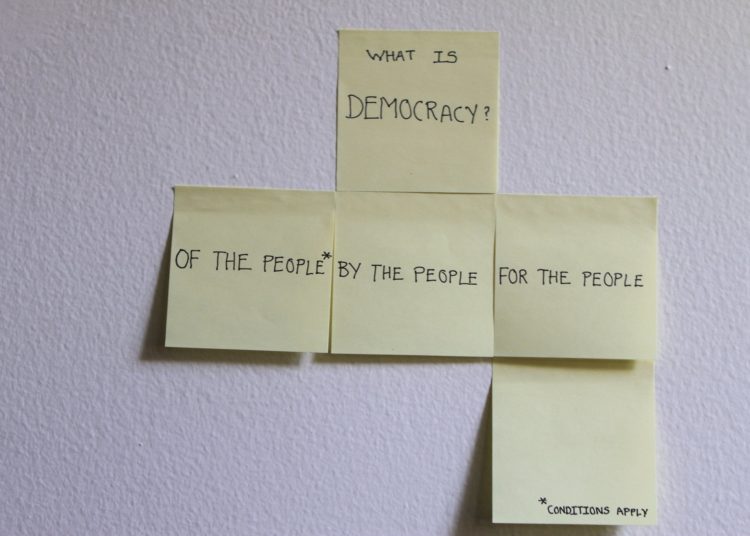 "The state of democracy in India" by paragdgala is licensed under CC BY 2.0

It is now over 30 years since the fall of the Berlin Wall (1989) and excited talk about the ‘end of history’. This was the theory that with the end of the Cold War and thus the dissolution of the Soviet Union (1991) and the ascendancy of Western liberal democracy, humanity had reached not only a significant point in wartime history, but ‘the end of history’ itself. That is to say the end of ideological conflict (capitalism versus communism), and the triumph of western liberal democracy as the dominant form of government. Yet three decades later, such optimism appears a distant memory. Discussion about the ‘end of history’ has now been replaced by worried talk about a ‘global democratic recession’.

But is it true that democracy is in crisis?

Pick up any newspaper and it certainly seems so. The governments of populist politicians such as Recep Erdogan (Turkey) and Jair Bolsonaro (Brazil) are categorised as ‘democratic’ in the sense that they were elected to office. Aside from these elections though, Bolsonaro and Erdogan are chipping away at the core aspects of liberal democracy: respect for rule of law, protection of minorities, government transparency, and respect for freedom of expression and the free press.

Even in leading democracies, such as the UK and the USA, there are similar signs of decay. Boris Johnson has illegally prorogued parliament, overseen a sharp rise in corruption, and attacked independent judges and lawyers, while Donald Trump launched an assault on the democratic institutions and norms that have long made the US a global ‘beacon’ of republicanism and democracy.

The ‘Freedom in the world 2020’ report reiterates these trends. Democracy and pluralism are under assault by dictators who are working to ‘stamp out domestic dissent’, and by elected leaders in America and India, ‘the world’s two largest democracies’ who are suppressing freedom of speech by stamping down on their critics in order to forward their ‘populist agendas’.

The report found that 2019 was the 14th consecutive year of decline in democracy and political rights. Interestingly, the negative pattern was most visible near the top and the bottom of the scale. More than half of the countries that were rated ‘free’ (such as UK, US and India) or ‘not free’ (like China and Russia) in 2009 have suffered a net decline in the past decade.

The Economist Intelligence Unit’s (EIU) democracy index also suggests widespread democratic backsliding. The state of global democracy is based on five categories: electoral process; civil liberties; the functioning of government; political participation; and political culture. The most recent democracy index finds that the average global score of UN member states fell from 5.48 in 2018 to 5.44 in 2019, making it the worst average global score since the EIU first produced the index back in 2006.

These reports alongside the general news, present a consistent picture. A number of important, long-established democracies are experiencing a hollowing-out of these democracies, while many (if not all) authoritarian regimes are increasingly confident that they can suppress political rights with little or no consequence.

In rich countries, populists have come to power in response to the perceived failings (in the eyes of voters) of democratic governments. Working-class voters, for example, came to believe that politicians did not care about them as inequalities grew wider and their fears of immigration grew. In many developing countries, political corruption sent the message that the ruling elites were solely interested in their own wellbeing.

This provided fertile opportunity for populist politicians to elevate the importance of identity politics far above normal policymaking. They were able to play on the grievances and prejudices of majority groups, attacking symbols of the ‘establishment’ (the Washington ‘swamp’, Brussels ‘Eurocrats’, or British judges), and inciting hatred and division. Ahead of the November election, Donald Trump did not even offer a re-election policy, choosing to instead rely almost entirely on identity politics.

The Economist perfectly explained why this shift to identity politics has done such damage to democracy. In obsessing over identity and differences, it says, voters are led away from tolerance of others and lose sight of the importance of democracy in solving social conflicts. Nobody wants to compromise on their identity, be it religion or race, as this can ‘seem like betrayal’. When a person feels forgotten or not mattered, elections are a way of voicing this.

Marc Limon is executive director of the Universal Rights Group, a think tank focused on international human rights policy. Part two of this series on the crisis of liberal democracy will be published tomorrow.