Kerry Pearson, as part of the Biden 100 series, looks at America's response to the military coup in Myanmar. She considers the cost of democracy in Joe Biden's foreign policy agenda. 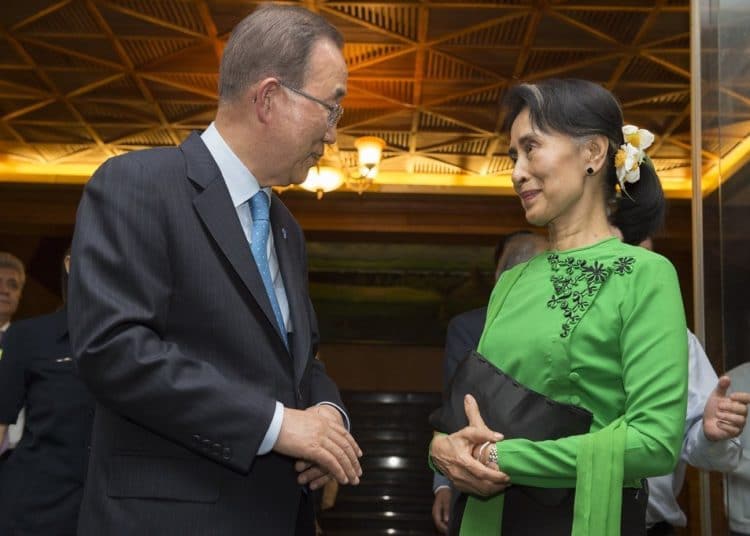 Joe Biden’s commitment to internationalism, multilateralism and human rights is about to be put to the test after the military coup in Myanmar. All eyes are on America, along with the rest of the international community, to deliver and restore democracy in the country.

A military coup took place in Myanmar (Burma) on 1 February, shortly after Aung San Suu Kyi’s landslide election victory. This has resulted in the armed forces re-taking charge of the country. The Tatmadaw, Myanmar’s army, demanded a rerun of the vote, claiming the election was fraudulent. Suu Kyi is under house arrest and members of her party, the National League for Democracy, have also been detained. Commander in chief of the army, Min Aung Hlaing, who, in the past, has received international condemnation, is now in power. Tens of thousands of protesters have taken to the streets in response to the takeover, but have been met with rubber bullets, water cannons and gunshots.

The international response to the coup has been mixed. Despite Aung San Suu Kyi falling from international grace after she refused to condemn the violent campaign against Rohingya Muslims, the UK, EU, Australia and US have all condemned the military’s actions, with Boris Johnson calling for the Tatmadaw “to respect the rule of law and human rights, and release those unlawfully detained”.

UN Secretary-General Antonio Guterres announced it to be a “serious blow to democratic reforms”. But China, who has consistently opposed global intervention in Myanmar, blocked a UN Security Council statement that criticised the military. Meanwhile, states such as Cambodia, Thailand and the Philippines have refused to comment on the coup, describing it as an “internal matter”.

The coup comes just three weeks into Biden’s presidency, offering him an opportunity to demonstrate his commitment to internationalism and his disdain of Trump’s ‘America First’ isolationism, but also to fulfil his promise to put human rights at the centre of American foreign policy. The president has already made a short speech at the White House addressing Myanmar, informing them, “The world is watching you”.

After consulting both Democrat and Republican lawmakers, Biden signed an executive order to impose sanctions on ten of the current top leaders in Myanmar’s military, to levy ‘strong export controls’, and to freeze US assets that benefit Myanmar’s government. Burmese generals will be forbidden from getting access to $1bn in Myanmar funds, which are being held in America.

But Biden has maintained a balance, and has proved his commitment to human rights by retaining support for health care, civil society and democracy. Treasury Secretary Janet Yellen said in a statement that the department stands with the people of Burma and would help them “in their efforts to secure freedom and democracy”. Yellen warned that if the Myanmar military continued to use violence against protestors, sanctions would just be the first step in aiding the re-installation of democracy. The US Agency for International Development also announced that it was “redirecting $42.4 million of assistance away from work that would have benefited the Burmese government … redirect these funds to support and strengthen civil society”.

Ned Price, spokesperson for the State Department, was asked by a reporter why Biden’s announcement did not outline an international response to the coup, to which he responded, “As you hear more from our partners, it’ll be very clear that what we are collectively rolling out, will impose steep and profound costs on those responsible for this coup”.

But in order to succeed in restoring Myanmar’s democracy, Biden and America will require a much greater international response to the coup. Myanmar’s neighbour, India, will likely be cautious of condemning the military, given its security relationship and economic interests in the country. India is thus more likely to take a pragmatic approach to the state, regardless of who is in power. China has been predictable in its unwillingness to criticise the army. The Chinese Foreign Ministry spokesperson Wang Wenbin said of Myanmar that it is a, “friendly neighbour” to China, both politically (Myanmar is an ASEAN member state) and economically. A permanent seat on the Security Council will afford China the chance to veto any efforts to re-establish democracy.

America and the UN will have to use their soft power to remove the military. Pentagon spokesperson John Kirkby announced that despite America’s alarm at the situation, he did not see “a US military role right now”. Biden ought to be wary; tough new sanctions on Myanmar may push the country towards China, a counterproductive move in his attempt to renew and strengthen Sino-American dialogue.