The right are using the culture war for their wealth and power. The left and 'progressives' must change their tactics and be more vigilant. 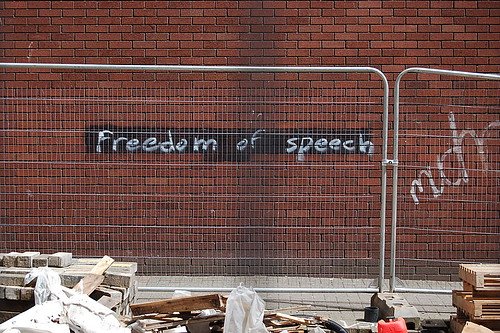 "Free Speech for the Dumb" by Walt Jabsco is licensed under CC BY-NC-ND 2.0

This is the second part of Dr Russell Jackson’s article series on the so-called culture war. Part one was entitled ‘What’s the culture war really about?’

Since at least 2016, British people have been more likely to view socialism more favourably than capitalism. It’s now crystal clear to a growing majority of the younger generations in the USA and the UK, that greed, the accumulation of wealth among a tiny elite, the influence of money in politics, the rise of corruption, the erosion of our democratic institutions, the lack of permanent well-paid jobs, failing public services, endemic environmental destruction and for the first time outside of wartime, falling life-expectancy, are all the direct consequence of a failed economic system which is being mercilessly exploited by a grotesquely wealthy elite.

“The world’s wealthiest 500 individuals are now worth $8.4 trillion, up more than 40 percent in the year and a half since the global pandemic began.”

A culture war to retain wealth and power

The Right are desperately trying to deflect from rising inequality, prejudice and environmental decay that their policies and their media have given rise to over the last 40 years, by making innovations in framing and language use.

There’s a global billionaire-funded industry dedicated to undermining the Left, and its unlikely to ever stop. They have the wealth and resources to own or fund much of the press, the most influential think tanks, institutions, charities, magazines, radio channels, TV ‘news’ channels, and political parties such as the US Republican Party and the UK Conservative Party.

Undermining the Left – the Right’s priorities

And what they try to do – all day every day – is to meet two priority objectives:

Free speech is alive and well

The Right insist on ‘free speech’ in ‘the marketplace of ideas’ and the right to hold views that others may find offensive – even as they fill our public institutions with their funders and supporters, and demonise and try to ‘cancel’ anti-colonialist discourse and critical race theory. They’ve even banned the debating of anti-capitalist ideas in our schools, and are now keen to criminalise protest.

They disingenuously claim that “free speech is under threat” in our universities from ‘woke students’ and ‘Leftist academics’, that ‘deplatforming’ and ‘cancel culture’ are rife and are a threat to ‘common sense’, democracy and even civilisation itself.

Yet a recent study revealed that a review of 10,000 UK speaker events found that just six had been cancelled: four lacked the required paperwork, one was a fraudster recruiting for a pyramid scheme, and the other was Jeremy Corbyn, whose rally was simply moved to a larger venue off-campus.

This is not to deny that occasionally certain issue-based groups can mobilise quickly to object to ideas and policies they disagree with (which is how democracy is supposed to works in so-called pluralist societies), nor that this can sometimes result in threats to academics, which is always wrong – but to argue this comes exclusively from the Left or ‘the woke’ is absurd. As an academic, I’ve received threats and experienced attempts to get me sacked for my views, and they certainly weren’t from the Left or ‘the woke’. 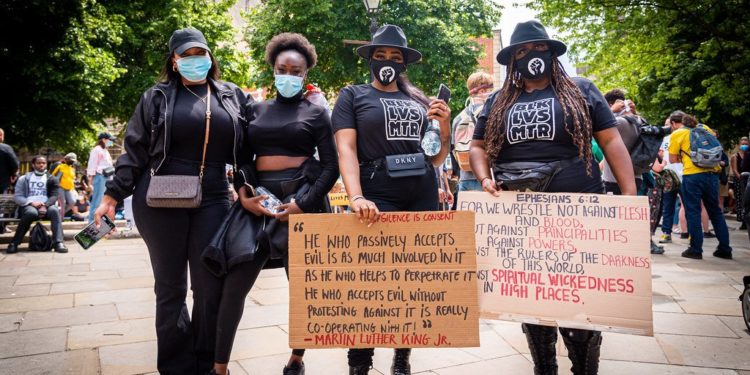 The challenge for the Left

However, there is another side to this, which in my humble opinion, the Left must recognise, accept, and confront.

If Brexit has taught the Left anything, it is that personal attacks, intolerance of opposing views, calling out, and demonisation must be reserved for context-specific actions and utterances.

When a far-right activist says that British-born second generation Muslims should “f*ck off home”, or a football fan makes monkey chants at Black footballers – fill your boots, call them out, and throw the book at them. Most people on the Right won’t disagree with you.

But, if someone voted for Brexit, criticises Meghan Markle, believes mass migration may have some negative consequences, or believes men cannot become female – instantly, loudly, and publicly shaming these people by describing them as ‘bigots’, ‘racists’ or ‘transphobes’, is a big mistake.

Why the Left are losing the culture war

Over the years, a robust system for debating ideas has evolved within academia for when an academic uses their hard-won rights of academic freedom to make an unpalatable claim that some people find offensive. This system ensures that ideas are peer-reviewed, robustly challenged, and if invalid, are ridiculed or left to wither. Simply screaming ‘bigot’ at academics or actively trying to get them sacked for doing their job, feeds, perpetuates, and strengthens the powerful and easy to understand framing of an ‘intolerant authoritarian woke Left’.

This, I believe, is why the ‘woke authoritarian Left’ narrative has gained so much traction. It’s why the Left is losing the culture war, why many of the accusations stick, why voters in the UK have stuck with the grotesque and incompetent Conservatives over the last few years, and partly why millions of voters increasingly see the Left as at best an out-of-touch joke, and at worst a dangerous authoritarian cult.

Be vigilant against creeping fascism

When David Starkey went on Newsnight after the 2011 riots to say that “whites have become Black”, and when he recently shared his views with Darren Grimes about there being “so many damn blacks”, he was rightly and almost universally condemned for his unhinged racist rhetoric. It proved that there are cases where people saying awful things are widely condemned, with all decent people of whatever political persuasion rightly appalled by such outbursts.

Of course I appreciate it can be a fine line, and one that can be difficult to judge; I struggle with this.

Finally, there is always a danger that ‘charismatic’ (in the eyes of some) people saying awful things will gain traction – Oswald Mosley, Nick Griffin, Katie Hopkins, and even Boris Johnson are all examples – and we all have a duty to challenge and expose their lies, prejudices, and hypocrisy.

Not many people are alive today who were alive when Hitler was. We must always be vigilant against creeping fascism, rising populist nationalism, and the demonisation of ethnic and religious minorities, disabled and gay people, and communists, socialists, and trade unionists – all groups which ended up in concentration camps.

As we are now acutely aware, democracy is very fragile, and it is under attack on multiple fronts from our own government.

A new approach for ‘progressives’

Progressives must be more strategic, better organised, use better communication, and become much better at identifying our own contribution to this mess, which I feel many on the Left are in denial about.

We must persuade people to take a different path to the one on offer, which benefits only the already powerful and succeeds by demonising, manipulating and exploiting the poor and marginalised.

Fewer than three in 10 of the electorate voted for the Conservatives in 2019 – just 29 percent. While we on the Left must do far more to inspire the 71 percent who did not vote Tory, given our antiquated electoral system, which we are stuck with until at least the next general election, we also have to persuade a significant proportion of that 29 percent why they should not vote Tory again. And this will certainly not be achieved by insulting them.

Insulting people is not an effective way to persuade them to think differently. We must be mindful of our own role in fuelling the so-called ‘culture war’ – because, like the everlasting battles against prejudice, exploitation, poverty, and inequality of wealth and opportunity, it’s a never-ending war we must keep fighting, and never lose.

Dr Russell Jackson is a parent, activist, sociologist and senior lecturer in communication & public relations at Sheffield Hallam University, in the department of media arts and communication. He teaches and researches moral panics, the history of communication, and the power of public relations in neoliberal society. Originally a bricklayer from Darley Dale, he moved to Sheffield in 1986.