Juliet Lodge looks at what the UK education sector will lose from abandoning the Erasmus scheme and replacing it with the Turing programme. "Alan Turing, after whom the government’s scheme has been named, would probably not have approved of this act of what Nicola Sturgeon calls educational vandalism." 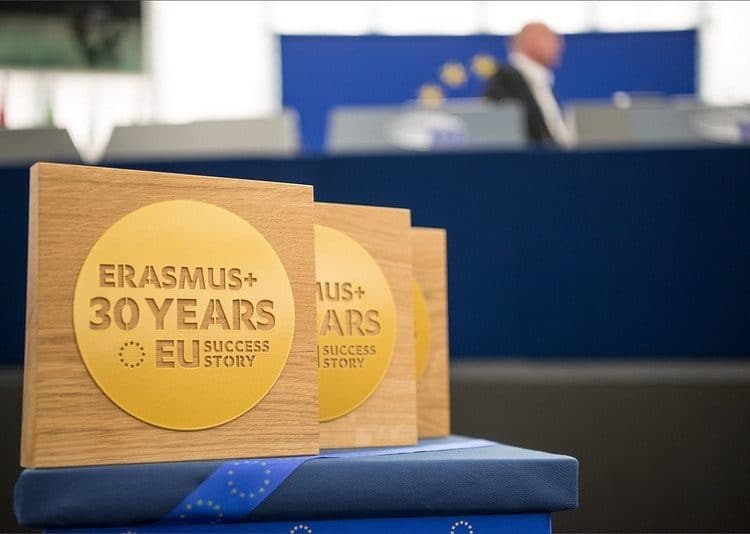 Erasmus awards in 2017 by European Parliament is licensed under CC BY-NC-ND 2.0

The British government has chosen to stop Erasmus participation as part of its Brexit agreement with the EU. It rejected the EU’s offer to allow our continued involvement subject to us paying a fair share for opting into the programme. The loss will be felt across the board.

The Erasmus programmes for education, youth and sport have enabled over four million people to experience education in different EU countries, and to join wider international Erasmus-led schemes outside Europe. Some 40 percent of British students studying abroad in 2017/2018 went to the EU as part of educational mobility programmes. Erasmus also opened doors to major cross-national research programmes for the UK, like Horizon2020.

Whereas the Irish government has said that it will give people in Northern Ireland the same chance to undertake a period of Erasmus study as people in Ireland, the British government intends to replace the Erasmus scheme with a new ‘Turing’ international educational mobility scheme, that it claims will offer the self-same benefits for UK students, for a fraction of the cost. The problem is that it won’t and can’t.

Erasmus is built on reciprocal arrangements, so everyone pays into the EU budget – and hence Erasmus – and everyone is entitled to benefit from it. Under Erasmus, people from many walks of life and of any age, are funded to spend time in another European country as part of their apprenticeships, training, research, voluntary work, college courses or university degrees. Now, students already enrolled on courses that include an Erasmus stay will complete their course on that basis. But from 2024, that ends. So after this academic year, no new fulltime courses will include Erasmus.

Any exchange scheme involves a great deal of preparation behind the scenes. That means that before anyone can go and study for a month or a year in another country, administrators and academics in both countries have to get together and sort out the details – anything from mutual recognition of marking standards and qualifications, to accommodation, internships, fees and insurance. This principle is applied to everything within the Erasmus scheme – from bricklayers to accountants, civil engineers to language and law students, robotics and computer scientists to philosophers, hairdressers, social scientists and many others. This has been done over many years and has involved a painstaking amount of work, with the costs shared between EU member states.

But Erasmus is inseparable from freedom of movement, and leaving the EU ended freedom of movement for the British. Turing can’t replace that ­­– and certainly not for twice the number of UK students, to far-flung corners of the world, as proposed. Turing can limit incoming student numbers and hike international student fees, as the government has done over the years. But so can any university abroad to which British people may decide to apply.

Erasmus has meant that ordinary people can study in another European country (more than just the EU), regardless of their socio-economic background – because they do not pay tuition fees, and they also get travel and accommodation grants to support them. In the past, educational exchanges had been the preserve of those who could afford them, and those who spoke at least one other language.

Initially, exchange schemes were mainly for language students to study abroad. But the EU decided that to be competitive in an interdependent world, it would make sense to open educational exchanges and grants to more subjects. Yorkshire played a key role in extending the range of subjects people could study as part of an Erasmus exchange.

For example, Hull University pioneered a European Politics degree that gave students the chance to study at a university in Brussels and simultaneously shadow the work of European officials and Members of the European Parliament. Our MEPs helped these students, some of whom went on to work in Europe themselves. All the students had a chance to graduate with a degree from a British university and a diploma from Brussels’ university.

None of this was easy. All of it was innovative.

It is unrealistic to expect that the Turing programme will be identical to Erasmus, or as good. Turing’s £100m budget is too small, and there is no incentive for foreign universities to take individual British students given the resources required to manage bilateral schemes. Now the UK is out of the EU, it will have to get all its standards and qualifications re-recognised by each individual college, university, professional body and guild in each member state. This will take time and money, and in the meantime, this will stymie innovative new programmes and qualification development.

Students must be assured that if they go and study abroad, they will not be disadvantaging themselves by doing something that will not be recognised as of a sufficiently good standard in future. Erasmus qualifications provided that assurance. Turing, so far, does not. If the government seeks to transpose Erasmus and re-brand the scheme as Turing, we should ask – why bother? Education is not as trivial as re-naming or re-packaging chocolate bars or kitchen cleaning products.

While many people may not be interested in doing these exchanges themselves, we all benefit from the experience of those who do. Cross-European research unravelled the human genome, discovered how brain implants can help those with physical disabilities, improved green energy, and generally stimulated mutual understanding across the board. We all benefit from other people learning to become nurses, genetic engineers, chemists, builders and so on. And we will all lose by the British closure of Erasmus to British students.

The effects will be more acutely felt by teenagers and their families, but the doors have been closed too for older people and primary school children. And that is why we can expect to hear a lot more about Erasmus than we ever did when we were in the EU. Alan Turing, after whom the government’s scheme has been named, would probably not have approved of this act of what Nicola Sturgeon calls educational vandalism.