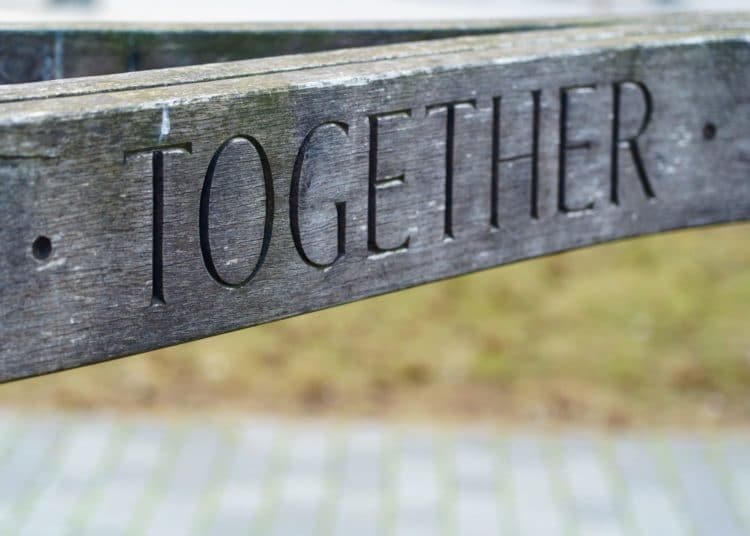 A wooden sign reading "together", Photo by Nick Fewings on Unsplash

Seventy years is a short time in British politics. If anyone is seeking an instructive but boring research project, they could do worse than deconstruct the party manifestos since the war to seek their tenuous relationship with reality – so many statistics that prove little more than the ability to count, so many slogans that were surely invented with hubris in mind!

Our confrontational, first-past-the-post electoral system encourages phony wars. The Tories still talk of ‘individual freedom’, as if they owned the stuff. Labour still calls for ‘social justice’, as if it invented it. Both favour science and technology, as if they were the front-runners of progress. Both oppose it, if it suits them. Both have changed their minds on the European Union (née Economic Community) several times over many years.

‘Strong and stable’ was Theresa May’s catchphrase in 2017, before losing more parliamentary divisions than any other prime minister in history. ‘For the many, not the few’ was Jeremy Corbyn’s motto in 2019, before handing the red wall seats to Boris Johnson.

PR consultants are paid good money to invent such stuff, and one was even elevated to the Lords. They choose their words, like those on the Brexit bus, to sell a narrative and a party brand, rather than to further the national debate. These images have changed little over the years, although everything else has changed around them.

The exchanges in the Commons frequently descend to farce. No, Jacob, Leader of the House, fish do not feel more free and happy in British waters. No, if I may remind the Honourable Member for Brent Central, another member may not be accused of lying, but of terminological in-exactitudes. Please, Prime Minister, answer the question.

Behind the padded doors, however, there is more cross-party agreement. The select committees reveal the better side to the parliamentary system: more concentrated grilling, less room for evasion or escape, and, with MPs from different parts of the country, a wider range of experience to address the various inquiries.

My impression is that Keir Starmer, since taking over from Corbyn, has made several attempts to broaden support in the Commons for measures that he believes to have been made in the national interest. He has avoided fights over Brexit and supported some efforts to cope with the pandemic, even when it was not in his party’s interests to do so.

However, as the leader of the opposition, whose role is to hold the government to account, he is in a weak position to look for cross-party agreement. We need a different approach. We need members from various sides of the House to accept that they share certain principles, even though they may differ on the various ways of achieving their goals.

This has happened before, sadly over Brexit. The impetus may have come from UKIP and the right wing of the Tory party, but it came to include Labour members as well (Gisela Stuart, Kate Hoey) and the DUP, who felt that they were fighting for national sovereignty.

There are similar – and better – principles that are widely shared across the parties, although they may not have developed into formal alliances. To strengthen our democracy, this is what needs to be built on.

There are – amongst many others – three important figures whose views may allow for a coming together from different directions of all concerned with upholding a liberal alliance and democracy.

Most MPs might be described as Keynesians in their approach to the economy, rather than free-market monetarists or top-down supply-and-demand managers, as in the old Soviet Union.

John Maynard Keynes wrote the textbooks that described how governments might guide and influence markets, ‘the mixed economy’, without capitulating or seeking to boss them around. He explained why governments should borrow to invest in social infrastructure, thus controlling unemployment and building for tomorrow. He was a mastermind behind Roosevelt’s New Deal in the 1930s and, after his death, the Marshall Plan in the 1950s.

He influenced Harold Macmillan and Gordon Brown, and sketched the “unacceptable face of capitalism”, long before Edward Heath admitted its gruesome details in the Commons. He may have sometimes been wrong. Opinions may differ as to how much money should be spent by the taxpayer, as opposed to the free-market investor, but his approach is still shared by enough MPs to constitute one stalwart peg for a liberal alliance.

Keynes’s fellow economist, William Beveridge, shared his views. He was the director of the London School of Economics (LSE) from 1919 to 1937, and was co-opted into the war cabinet to ensure a fairer distribution of resources, and to plan for life when peace returned. He proposed labour exchanges and the scheme for National Insurance.

In 1942, he published Full Employment in a Free Society, which described how the ‘five giants’ blocking the road to reconstruction must be defeated: Want, Disease, Ignorance, Squalor and Idleness. He outlined the plans for a welfare state.

He paved the way for the introduction of the National Health Service by the post-war Labour government – and the 1944 Education Act, introduced by a Conservative minister, Rab Butler, but supported across the House. He drew connections between social problems that had previously been considered separately. He explained why good health was damaged by poor housing, how poverty led to crime, and ignorance to exploitation.

By some contemporaries, however, Beveridge was seen as an incorrigible do-gooder. Ernest Bevin, the Labour MP, thought him insufferably high-minded and, although he was elected in 1944 as the Liberal MP for Berwick, he lost his seat to Labour in 1945. He was more willing than Keynes to intervene in the markets, in the spirit of righteousness.

The third peg in a liberal alliance would be Karl Popper, who published The Open Society and its Enemies in 1945 and was appointed the professor of logic and science at the LSE, after Beveridge left. Popper taught George Soros, the financier and philanthropist, who established the Open Society Foundation in his name. The LSE is almost as much associated with modern liberalism, as Eton and Balliol are with the Tory party.

Popper studied philosophy, science and psychology in Vienna. His family was Jewish by birth, but not by religion, and he came to Britain in the late 1930s to escape from the threat of the Anschluss, the annexation of Austria by Nazi Germany. He challenged the so-called scientific method, which had sunk deep roots into the Social Darwinism of apartheid and into the logical positivism of the Marxists.

Authoritarian regimes justified their assumption of power by pretending that they were following the logic of evolution and the survival of the fittest. Popper argued instead that societies develop through the process of self-criticism, the quest for truthfulness and the unrestricted right to ask questions. This drew him towards liberal democracy.

Time for a liberal alliance

The figures described above are those whose views have influenced my own opinions as a Liberal, since I first joined the party as a Grimond convert, “marching towards the sound of gunfire”. But I am aware that there are many members of other parties, who will have come to similar conclusions from different trajectories.

Now, however, the principles of liberal alliance and democracy are at stake, by which I mean the ‘mixed economy’, the ‘welfare state’ and the ‘open society’. The challenges come from many directions, not least from a government that is unsure of what it wants, but claims the right to do anything that takes its fancy.

This is the time to form an alliance of those members who share this analysis, but may feel constricted by party labels. They should not wait for pacts and PR. They should form a cross-party pressure group and add new initials after their names, LA.

The time has come for those who still believe in our five-year dictatorships to feel the pressure of true opposition, not only from those who want to take over the government, but from those want to replace the system.