In the first of our review series for 2020, Charlie McCarthy looks at the shocking rates of food poverty in the UK. The Trussell Trust predict that this winter will be their busiest period ever and have warned that their figures represent just the “tip of the iceberg, as many people will have been helped by other community groups”. 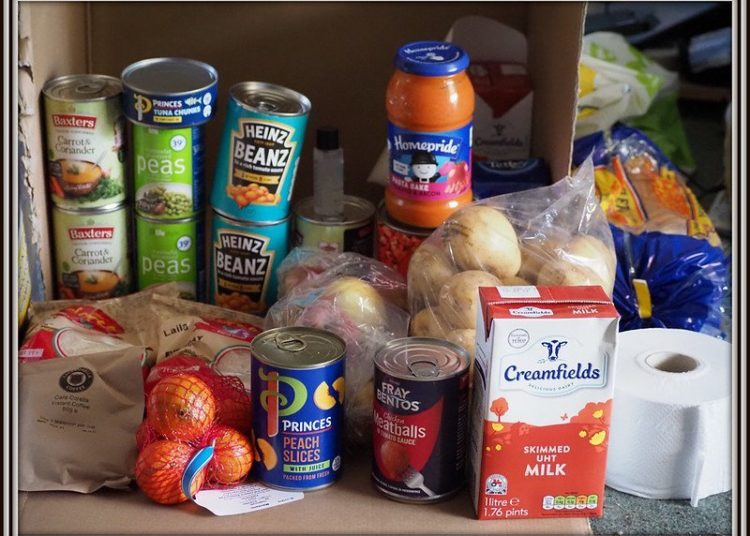 Food pack. United Kingdom by pete. #hwcp is licensed under CC BY 2.0

A food bank, in the unlikely scenario that we have any readers who are unfamiliar with the term, is a non-profit, charitable organisation that distributes food to those who have difficulty purchasing enough to avoid hunger. In the UK, this is done through a voucher system from a third party. The Trussell Trust, a Christian charity based in Salisbury, is the UK’s only food bank network.

At Harvest Festival and Christmas, food hampers are traditionally given out to the elderly and vulnerable members of our communities. In modern times, all year round hunger in the UK has been a prominent issue since 2007, but it has dramatically increased since 2011. The Trussell Trust was founded by Carol and Paddy Henderson in 1997, based on a legacy left by Carol’s mother, Betty Trussell.

The trust’s initial projects focused on improving conditions for the 60+ children sleeping at Central Railway Station in Bulgaria. In 2000, Paddy received a call from a mother in Salisbury who was struggling to afford food and faced sending her children to bed hungry. On investigating the data on poverty and deprivation in the UK, Paddy started the Salisbury Food project in his garden shed and garage.

Having been established in 2000, the Trussell Trust expanded to two food banks in 2004, 252 in 2012 and in the 12 months to March 2020 it grew to include 1,200 food banks. That year, the network distributed 1.9 million three-day emergency food supplies to people in crisis, an 18 percent increase from the previous year. According to figures obtained in the Commons Library, the UK now has over 2,000 food banks, just over 900 of which are independent. To put that into context – there are 1,300 McDonald’s restaurants in the UK.

Between 1 April and 30 September this year, the first six months of the pandemic, the Trussell Trust has distributed 1.2 million food parcels to people in crisis. That’s an average of 2,600 parcels to children given out every day – an additional 47 percent increase in demand. They predict that this winter will be their busiest period ever and have warned that their figures represent just the “tip of the iceberg, as many people will have been helped by other community groups”. Bear in mind that this mid-year update was released before the closure of Great Britain’s borders due to the latest covid mutation, and before the country left the transition period.

The grim reality facing many families in the UK is that they are not able to earn enough money from their working lives to feed their families. This has been exacerbated by the covid pandemic, but the foundations of food bank reliance were laid in the UK government’s policy of austerity following the global economic crash of 2008. There is debate as to whether or not the UK economy suffered a deeper recession after 2008 as a direct result of austerity. Either way, the knock-on effect is that food bank providers are now feeding many in-work clients who do not earn enough money to cover their monthly bills.

The UK economy post 2008 has seen a rise in low-paid, insecure work: the so-called ‘gig’ economy. In this economy, instead of a regular wage with benefits such as paid holidays and paid leave for sickness, workers get paid for the ‘gigs’, they do such as a food delivery or a car journey. One definition of the gig economy is a “labour market characterised by the prevalence of short-term contracts or freelance work, as opposed to permanent jobs”. Depending on your view, the gig economy either offers flexibility to fit work around other commitments, or it is a form of exploitation that offers very little protection to workers in their workplace.

The poverty figures for the UK are sobering:

The post-covid UK economy is shrinking: the Treasury December forecast estimate is down by 11 percent in the current financial year. Hopes that the government might change its policy and ‘level up’ the country suffered a blow in November, when Chancellor Rushi Sunak declared war on many working people in the form of a public Sector pay freeze. The national economic picture is grim.

Anti-poverty campaigners such as the campaign for a real living wage (£9.50/hour in the UK, £10.85/hour in London) make the case for employers as well as employees. There are benefits to be had to both, if workers are well paid and do not have to rely on emergency food aid as part of their weekly routine.

This year, high-profile figures such as Marcus Rashford have highlighted the reality of living in poverty in the UK. He has been single minded in challenging the government to do more to support children growing up in poverty by extending government support to such children in the school holidays. Support for his campaign has been heartening. In October, after parliament voted down Labour’s motion to provide 1.4 million disadvantaged children with a £15 a week food voucher, many restaurants, bars and cafes contacted Rashford with offers of help during half term.

Ken Loach’s 2016 film ‘I, Daniel Blake’, which brought home in graphic detail the challenges of living in poverty in the UK, was an eye-opener for many. Daniel Blake is the story of a 59-year-old carpenter who has to rely on welfare following a recent heart attack that leaves him unable to work. It brings home to audiences just how little money people on benefits are expected to live on. That lesson is now being shared more widely in the UK, as we struggle through the pandemic after years of austerity.

As 2020 drew to a close, history was made when UNICEF donation £25,000 to a community project School Food Matters in Southwark London. This is the first time UNICEF had had to support hungry people in the UK in its 70-year history. The money will be used to provide 18,000 breakfasts in 25 schools over the two-week Christmas holidays and February half term next year. Jacob Rees-Mogg, the leader of the House, branded the donation “a stunt” and said UNICEF “should be ashamed of itself”, adding:

“I think it is a real scandal that UNICEF should be playing politics in this way”.

“UNICEF UK is responding to this unprecedented crisis and building on our 25 years’ experience of working on children’s rights in the UK with a one off domestic response, launched in August, to provide support to vulnerable children and their families around the country during this period.’’

She added, “We believe that every child is important and deserves to survive and thrive no matter where they are born”.

2020 has been a challenging time worldwide. We can only hope that more progressive voices will prevail in 2021 and that the UK government will honour its pledges to level up and improve the lives of the poorest, both here and abroad.

Unfortunately, the signs so far are not great.