Who gave the “bloviating beshagged puddingbowl” permission to trash the UK?

Asking for the great British public. 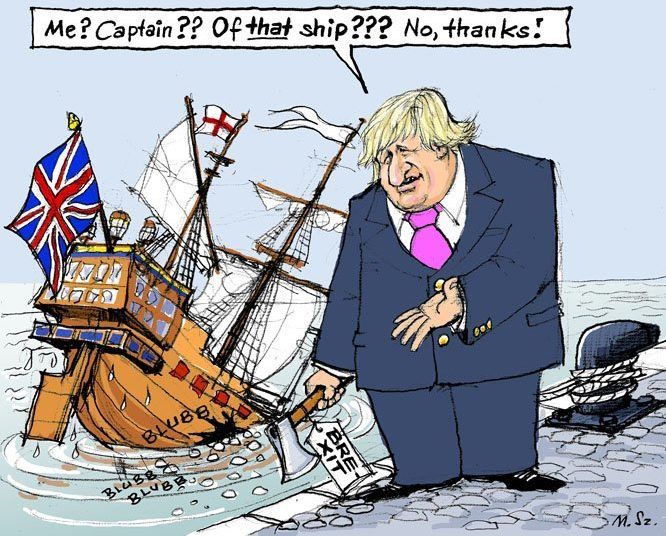 Asking for the great British public.

In Belgium, King Leopold II’s statue was taken down as part of the global response to #BlackLivesMatter. In Belgium, the prince who went on a lockdown-breaking jaunt to Spain was fined over €10k. But in barmy Britain, the public was told to get over the lockdown-breaking Barnard Castle affair and to think before cataloguing all the miscreants on plinths around the country. Banksy suggested a solution in a new statue, resurrecting that hauled from the Bristol dock and moulding it in a new commemoration to those pulling it off its plinth.

Dripping contempt, the PM went into full disdainful denial mode for PMQs. Metaphorically sticking two fingers up at us all, he reminisced over his fave game – whack-a-mole – thumped the lectern and denied the evidence. If in March he was confident of sending Covid-19 packing, now he was proud of his record and refused to admit, let alone apologise for, not locking down earlier to save tens of thousands from death. This wasn’t merely a boastful display of incompetence or amnesia. It was the full-on, full frontal, soppy indolent sneering of an untouchable prince of entitlement.

Jolyon Maugham QC looked at the 30k avoidable deaths and pointed to the remarks of “the bloviating beshagged puddingbowl who is pretending to be Prime Minister” who’d declared himself “very proud” of coronavirus response.

World-beating Blighty? You gotta be joking. It’s become nothing but a spectacle of how not to do anything, except maybe demand more freeports as the EU clamps down on them, seeing them as criminal money laundering hotspots.

Joshua Silver @eyejosh asked: “How do the British people deal with a government which has just killed up to 60,000 innocent people with its criminal ‘public health’ policy (herd immunity) and are now intent on destroying the economy?” The National Farmers’ Union and Confederation of British Industry concurred: business resilience was on the floor.

The government did not blink. Any responsible government would stop, pause and evaluate the evidence for the sake of the people it is supposed to keep safe and protect. But this lot seem bent on doing the opposite, to once again feed their insatiable, vainglorious greed. It’s doubtful that an iota of compassion can be found among their ranks. But if they seek to impress the world with their unwavering commitment to cruelty, they are disabused at every turn.

Tories pontificating about the democratic route to removing statues met scornful “never trust a Tory” reminders from the public. Either they had short memories or a woeful education. The government’s callous recklessness over the Irish protocol reveals worse – a collective massive info-gap between the ears of a Cabinet full of airheads. Ignorance of Irish history is no excuse. They damn well ought to find out about how the great gift of the ongoing peace process is sustained by EU membership. Maybe they need a map so they can identify both the EU’s external border going straight through the island of Ireland and the borders and customs posts in the Irish Sea.

This was the week when the government’s ludicrous boast of taking back control showed it was incapable of anything other than vandalism laced with rank hypocrisy.