Whatever the outcome of the vote of no confidence, Tory MPs’ indulgence of Johnson has put their party between a rock and a hard place

Popcorn being wheeled into Labour HQ as we await the vote of no confidence results. Gif by Stan

This moment in political history is what happens when politicians are confronted with their own mistaken judgement. For too long, Conservative MPs have shut their eyes to the damage Johnson is doing to the country. By keeping him in power they’ve put their personal and party interests before the country’s. In the absence of a long-overdue response by them to ‘the Johnson problem’, the weight of public opinion is now starting to force an outcome that will be damaging for their party, whichever way the vote of no confidence goes tonight.

The rock and the hard place

If Conservative MPs keep Johnson in power when the public has lost trust in him, they will spend the time until the next general election helping a lame duck continue to waddle its way into the oncoming traffic, while the country’s priorities go unresolved. There is no evidence Johnson really wants to change the habits of his lifetime, or that he is capable of it.

His response to Sue Gray’s report and the Metropolitan Police inquiry was to edit the introduction to the ministerial code to remove all the measures of probity that he frequently fails to meet. That has not endeared him to the public, coming hot on the heels of the police’s fixed penalty notices, and Gray’s criticism of the Downing Street breaches of covid regulations. Johnson’s vocal critics now come from across of the political spectrum but noticeably from within his party.

The lame duck scenario is compounded by the imminent threat of the Tories losing both forthcoming by-elections – in Wakefield to Labour, and in Tiverton and Honiton to the Lib Dems. Voting to keep Johnson in power will bring Conservative MPs into sharp relief with voters and their clear turn against him.

There is also the prospect of a parliamentary committee finding him guilty of lying to parliament about the parties taking place in Downing Street and that the fact that all covid regulations were applied. Just today, Johnson’s anti-corruption tsar John Penrose quit, citing the fact that the prime minister himself should have resigned following clear evidence of having breached the ministerial code.

Johnson will go on wrecking the Tories’ reputation for honesty and competence. But if they remove him from office now, they will still be scratching around to find a leader from within their ranks who can restore the respect of the public and give them a chance of being elected at the time of the next general election. While this may be a dilemma for Conservative MPs, events over the weekend would suggest it won’t be a difficult decision for the public.

This vote is no side show, it’s the main event

Priti Patel this morning described the vote as a “side show”. However, Patel reliably misjudges public sentiment and always prefers her own views, while insisting they reflect the public’s. So, we can take it as read that she’s wrong about this too. If any evidence were needed to demonstrate that something has happened to break through the British public’s natural reserve, it was the loud and protracted booing given to Johnson on his attendance at this weekend’s jubilee celebrations.

By trying to make the vote seem an optional piece of parliamentary trivia, Patel ignores the anger of the public, many of whom are law-abiding Conservative voters. She denies what this vote really signifies: that there are enough Tory MPs hearing from constituents who have lost respect, tolerance and patience with a man who repeatedly reveals that his priorities are geared towards the preservation of Boris Johnson as prime minister. 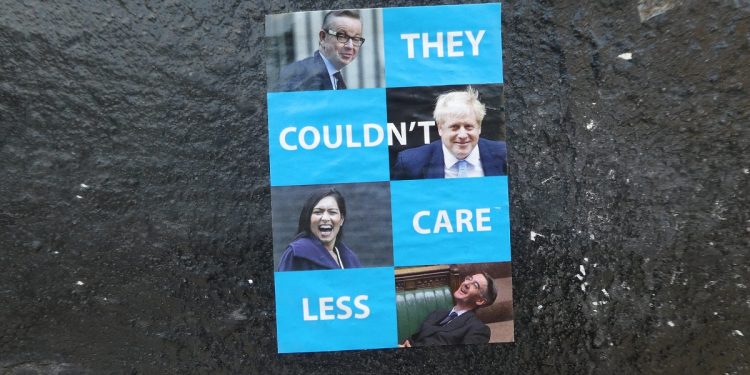 Loyalty to Johnson was always a one-way street. No one was ever protected by this loyalty. In contrast, colluding with Johnson is now more likely a political ‘suicide note’, not a guarantee of security or favouritism.

Yet these MPs have indulged a man who was known to be unfit for the office of prime minister long before the time they elected him as their leader. Their decision to elect him in the first place was ill-judged enough. Their subsequent defence of, or blindness to, his failings in office is woeful. These failings were always too severe and too obvious for them to get away with defending him indefinitely. But in case any Tory MPs were still unaware, the campaign group Led by Donkeys today released a video detailing exactly why Johnson is unfit to be prime minister.

The public has made its views known – will Tories in parliament listen?

Those who have colluded with and supported Johnson, now have an opportunity to redeem themselves. Public opinion has finally forced the party to confront the fact they have been avoiding – Johnson is a liability not only for the Tory Party, but for the country as a whole.

If members of the public see Tory MPs continuing to support Johnson when they have long since seen through him, and if he remains prime minister, then these MPs are making a rod for their own backs over the next 12–18 months. This vote tonight is really about deciding the lesser of two evils: move Johnson now or move him later. But in whose interests will the ‘evils’ be judged, the country’s or the Conservative Party’s? The choice might be painful, but it should not be ducked.

The lack of serious candidates competent enough replace Johnson is a problem. But these MPs now have to choose between the evaporating short-term advantage of keeping Johnson in place or the long-term interests of the country. For too long, they have deceived themselves into thinking their own interests and the country’s are met by Johnson. That deception no longer holds.

It is to be hoped that the ability of a prime ministerial candidate to “make us all laugh”, is no longer a criterion for the office. We wait to see how Conservative MPs resolve this tonight.