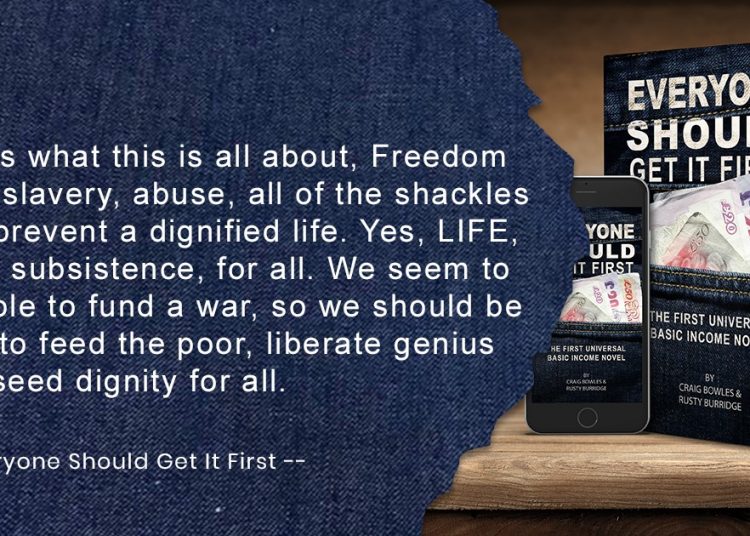 Everyone should get it first book cover

How do we make universal basic income (UBI) a subject that is seriously debated? The importance of this socially innovative concept is paramount in the extreme, now more than ever in our recent past.

UBI is an undiscovered country that requires no passport, no inoculations, just an open and caring mind for those you love, neighbours, colleagues, strangers or even enemies.

There are so-called experts, social anthropologists, social scientists, economists for and against UBI. There are many non-fiction books which explain the nuts and bolts of what a UBI could look like. There have been numerous trials across the globe with varying degrees of success, but that’s all they are: isolated and insulated trials, finite bubbles that are not a barometer for the whole of any nation.

Our new book, Everyone Should Get It First, brings the concept into a world that you can appreciate – a reality that, if you don’t actually live it, you’ll know someone who does.

When it came to creating the world and the ideas that we demonstrate in the novel, we decided that we needed the setting to be as close to something that was accessible for the majority. We populated it with a mixed and relatively diverse group of characters.

Co-writing is a complicated process, but also a fantastic opportunity for idea generation. We created a framework from which ideas could flow bountifully to the extent that it was hard to identify who wrote what.

We decided that fiction was the best medium to make accessible all the arguments and concepts traditionally associated with UBI, as well as a way of exporting our own ideas and also inviting the reader to dream up their own. We chose entertainment over intellectual browbeating, especially in an area when nobody can legitimately call themselves an expert, and where a bit of compassion, imagination and inclusion are paramount.

Traditional UBI forums are something of an innovation cul-de-sac where pedantry and religious certainty, for or against UBI, reign supreme. We wanted to play and mutate within the story and the characters, but also with the reader.

Our story follows a very small government-run trial of UBI, which on the surface seems like an amazing opportunity for those participating. It is to last a year, after which the result will be judged by whatever metric the government has chosen in order to gauge whether a countrywide roll-out is operational. Of course, all is not quite what it seems, as our characters discover.

The journey taken provides the opportunity to contemplate what each person could, would and should do with their unexpected windfall. Some will take advantage of the situation for good, and others, maybe not quite the same advantage. What we’ve tried to illustrate is the division that can occur when some people have been chosen to receive it and others not. 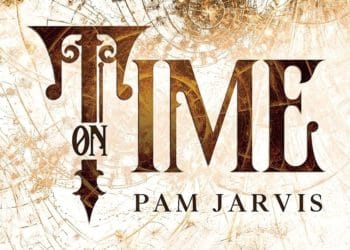 Exploring how UBI could work with our characters

Social enterprise, responsible anarchy and innovative ideas are some paths in which a diverse and in some ways disparate bunch of individuals make use of the opportunity. It demonstrates ways in which we believe the public might rise to the occasion.

For those fortunate enough to be in decent employment, there is the opportunity and new ‘disposable’ income to enjoy a few extras. For those who may be struggling to choose between a pint of milk and a loaf of bread, we’ve tried to show that the fear of going into the shops and counting through the pennies that may be in the purse is not how life needs to be.

We have deliberately seeded characters and ideas who will have their own stories to tell and experiences to relate, there are some Easter Eggs, and some real life characters and scenarios.

While writing the novel, Rusty used a small inheritance after his mother had died, and metered it out as a faux UBI, to prove for himself that a real version could work. He created a formula evolved for life augmentation, both selfish and social, in which he took the metered-out inheritance and regarded it as a mock citizen, effectively being paid to be himself. He took both a socialist volunteering approach to his new time as well as a free-market entrepreneurial approach.

What we have done is take a ‘Passport to Pimlico’ view on this idea which we hope will go some way towards informing people about the possibilities, and disabusing others of the gut-reaction notions of ‘free money’. The novel is not trying to be ‘The Bible’ of UBI. It’s merely an idea to open up a wider conversation and demonstrate some of the potential knock-on effects. Providing a little dignity which everyone can appreciate, can positively affect the individual, the family, community and society at large.

If our novel helps develop a conversation, then that’s great. You may agree or disagree with our ideas, and that’s great too. Either way, so long as we keep on talking, trying to find the way that will work for everyone. Nobody should fall through the holes for any reason.

Resign the poverty line to the history books and eradicate a reliance on food banks. It worked for Rusty and the community/world with which he interacted. Everyone Should Get It First!

Imperial measures are our birthright

Craig Bowles originally trained as an actor at the Central School of Speech & Drama. He’s had various jobs over the years and finally found his niche recording audio books. He’s an incredibly proud father of his children, and still insanely in love with his wife Sara of over 20 years. A founding member of Fracking for Fairydust that wrote ‘Daddy I’ve Just Seen Father Christmas’, and looking to produce his first screenplay based on the song.

Rusty is the disinherited son of a working-class millionaire. He has never had a career as he found it difficult to hold down a job, a relationship, or a home. Always itinerant, sometimes vagrant, but in later years appeared on Australian radio doing shows on science, transhumanism, and social innovation. His ambition is to liberate all sentient life and run off with aliens. He is a devoted father, lover of cats and kangaroos as well as an ill-tempered philanthropist.

Imperial measures are our birthright