I am attempting to raise £35,000 for dozens of refugee charities in the UK and Europe – that is to say, £1 for every ‘like’ that Nigel Farage has received on his original anti-refugee propaganda video. 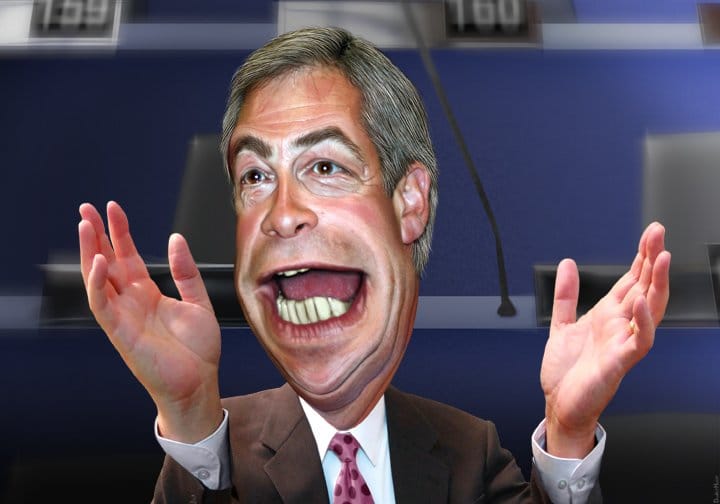 Nigel Farage – Caricature by DonkeyHotey is licensed under CC BY 2.0

On Thursday 30 July, Nigel Farage, having broken the rules of lockdown several times in preceding months to whip up anti-refugee hysteria on the south coast, turned up at the Bromsgrove Hotel in Birmingham to shoot his latest propaganda video in a desperate cry for attention.

To date, the video has been seen by several million people and ‘liked’ by several thousand (almost 35k at last count).

When I saw this, I took to social media with the intention of rallying people behind a refugee charity. However, before posting, a more ambitious idea began to form. Why not start a crowdfunder of my own? That way, we rally people behind a campaign, raise more and distribute the money among a wider selection of charities. I am now therefore attempting to raise £35,000 for dozens of refugee charities in the UK and Europe – that is to say, £1 for every ‘like’ that Nigel Farage has received on his original anti-refugee propaganda video.

The idea for this crowdfunder was inspired in part by the events that took place in Wunsiedel, Germany in November 2014, where anti-far-right campaigners cleverly turned hate on itself by raising ten euros for every one metre the far right moved along their march route. This gave the people of the town a positive way of countering hatred. I thought I would borrow this campaign example to turn the toxic telling of refugee and migrant stories by the likes of Nigel Farage into a positive community fundraiser.

The campaign is also designed to act as a reminder that the UK has a proud history of welcoming the destitute. Many will know this story, but it’s worth repeating: in May 1939, more than 900 Jewish refugees fled Hitler’s Germany on the SS St Louis; they hoped to reach Cuba then travel to the US, but were turned away from both. The increasingly desperate passengers were forced to sail back to Europe, where more than 250 of them perished at the hands of the Nazis.

It was not so long ago that the British government was busy rescuing thousands of child refugees from almost certain death. In the years since, the UK has stood tall in the world, offering sanctuary to the displaced and destitute.

Britain is better than Nigel Farage. Fact. Let’s prove it by raising more money for refugee charities than Farage’s propaganda video can get in likes. The fundraiser is intended as a message to the world including migrants and refugees, that the UK is a warm and welcoming place. Let’s show the world, including those who have looked to the UK as a place of warmth, humanity and leadership, that we continue to be a place of sanctuary for the destitute. Let’s stand tall in the world, once again. Remember this?

For every like his hateful propaganda gets on Twitter, let us match it with a donation. Let’s turn his hate against him; the more likes he receives, the more this crowdfunder swells, with every donation going to refugee charities in the UK and Europe.

I have been in touch with a number of fantastic charities who are supporting the campaign. Confirmed charities so far include, Care4Calais, Refugee Council, Migrant Voice and Kent Refugee Action Network to name a few.

As part of the crowdfunder, I’ve been asking those donating to make suggestions for charities I can donate to. There are so many brilliant charities out there, which is even more reason to raise as much money as possible so I can donate a meaningful amount to all suggestions made, to include both small-scale local charities as well as larger national charities.

To date, the crowdfunder has raised £25,000 with 1,500 supporters. Amazingly, two-thirds of the target was raised within the first 10 days of being launched. It has been shared on Facebook over 3,000 times and is currently trending towards the stretch target of £50,000 which would be an incredible outcome.

Turn anger into action and show the world that Britain is better than Nigel Farage by donating here.