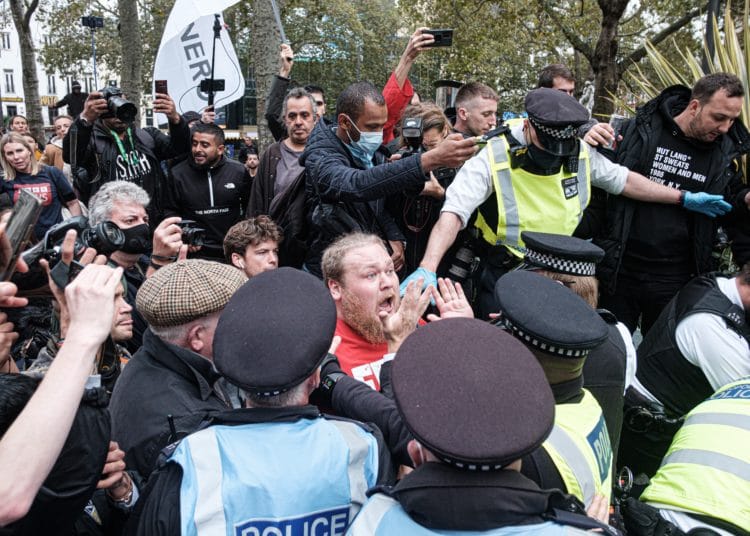 With another lockdown in England starting on Thursday, covid is well and truly back with a bang. It is sweeping the streets, crashing the Test and Trace system and even being carried into parliament by MP Margaret Ferrier. A virus doesn’t spread itself, as the government has repeatedly exclaimed when lambasting young people for house parties.

Yet, so far, those in charge have sought to avoid applying criminal sanctions to covid spreaders. Instead, they have responded with fines: £10,000 for a house party, £200 for not wearing a mask. Put like that, it seems like an expensive game of monopoly; people can buy their way out of reckless behaviour. This isn’t commensurate with the consequences of spreading covid, a virus that has left holes in 46,000 UK families, and counting (based on the government’s official figures). Is the government’s reluctance to overburden the courts with covid crimes giving reckless people a free pass?

It was Margaret Ferrier who got me thinking about this. She caught a train from Scotland to Westminster, and back again, whilst covid positive. How reckless, I thought. How many lives she was putting at risk. If someone had genuinely become ill from her actions, I didn’t feel a fine would be sufficient. Yes, arguably my anger came in part from the fact that so many politicians have acted as the antithesis of upstanding citizens throughout this pandemic. Cummings had his lockdown holiday; MP Robert Jenrick travelled, essentially, to his second home; SAGE advisor Neil Ferguson hosted a romantic visit during lockdown … I could go on.

The one rule for us, one rule for them feeling has been garnering strength with each high-profile breach, yet Ferrier’s train journey seemed particularly offensive, devoid of legality, common sense and consideration. It reiterated that reckless actions have little consequence, even when they put lives at risk.

Yet recklessness is prosecuted in other areas of law; think reckless driving and reckless damage to property. Even reckless transmission of HIV can constitute grievous bodily harm. The case of Konzani (2005) is remarkably similar to the current context: one man passed on HIV to three unsuspecting sexual partners, and received a ten-year prison sentence for grievous bodily harm. My question is, if it’s illegal to recklessly spread HIV, should it be illegal to recklessly spread the coronavirus, which is, at present, more deadly?

There have been several prosecutions in the last few months for coughing/spitting at emergency workers, whilst claiming to have coronavirus. These people did not recklessly spread covid but intentionally sought to pass it on, which, to most people, would make them seem more culpable. But how different is it to intend something, than to know it could come about as a result of your actions and do it anyway? Not vastly dissimilar.

Leaving the house when you know you’re covid positive comes with obvious risks, especially if one enters an enclosed public space. Coronavirus has taken over a million lives worldwide, making it more deadly than homicide. We know the dangers, and ten days of isolation whilst contagious is not an unreasonable task. Therefore, surely there should be criminal consequences for those who put their own freedom above other people’s lives? This was exactly the argument put forward when Konzani was prosecuted for reckless HIV transmission, and it was accepted by the courts.

The distinction between spreading HIV and spreading coronavirus is only the means of transmission.

Coronavirus is an airborne virus, like colds and flu. This time last year, no one would have thought about taking to court the person who coughed in their lecture theatre, giving them Freshers’ flu. It would be very difficult to prove who gave it to them, and brushed off as ‘one of those things’; an inevitable risk of social interaction.

But this year, with the advent of Test and Trace, the virus has been localised, and can often be traced back to a source. With this, comes blame, and a desire for some form of justice. After all, a trip to the pub, whilst covid positive, can cost someone else their life.

Criminalising the reckless transmission of Covid-19 could have strong deterrent effects. A £1,000 fine does not carry the same weight as a criminal sentence, nor does it enforce the sense of guilt that many argue should be felt by reckless transmitters. The fact that symptoms differ wildly for different people and demographics may be responsible for the discrepancy in behaviour between different groups. Less vulnerable sections of society have tended to behave in a less cautious way, due to the fact that the virus has affected them mildly. Criminal sanctions would serve as a frank reminder that actions have consequences, even if some groups don’t feel them.

However, prosecuting reckless transmission would likely lead to huge over-criminalisation, due to the prevalence of the virus and ease of spreading it. At a time where courts are already inundated and backlogged, this burden could push the system to breaking point. Furthermore, the fact you must ‘know’ of your diseased status in order to be culpable of reckless transmission may deter people who suspect infection from getting tested and treated, if this could be used as evidence against them.

This is also a risk with the Health Protection Regulations 2020. The government is having to grapple with the competing aims of encouraging people to get tested and deterring people from breaking isolation and spreading the disease. If getting tested could lead to something even worse than a £1,000 fine, people might not get tested at all.

Finally, there is the question of whether criminal sanctions are the right course of action. If we characterise reckless covid spreading as grievous bodily harm, we are punishing people for the impacts of a virus, and localising a pandemic within the framework of a victim and a perpetrator. Reckless transmitters aren’t motivated by a desire to cause harm. This virus is bigger than spreaders, bigger than blame and beyond the point where we can go out without knowing that we are taking a risk in doing so.

There is a case for prosecuting the reckless transmission of Covid-19. However, the practical burdens of enforcing it, and the difficulty in proving the source of transmission, serve as a strong countervailing force. Perhaps Covid-19 will encourage more discourse on the subject of reckless transmission, the offence that has been criticised for ‘treating the diseased as if they are the disease themselves’. Is it ever appropriate to harness the full force of criminal law to deal with a viral pandemic? Or could this be the way forward to encourage public compliance with covid legislation?

Amy Ramswell is an undergraduate law student at the University of Leeds. She is an editor for The Gryphon, and writes articles to escape the mundanity of legal reading. She also likes running - despite being the antithesis of Paula Radcliffe - and painting with her housemates. Her areas of interest include psychology, politics and legal issues.