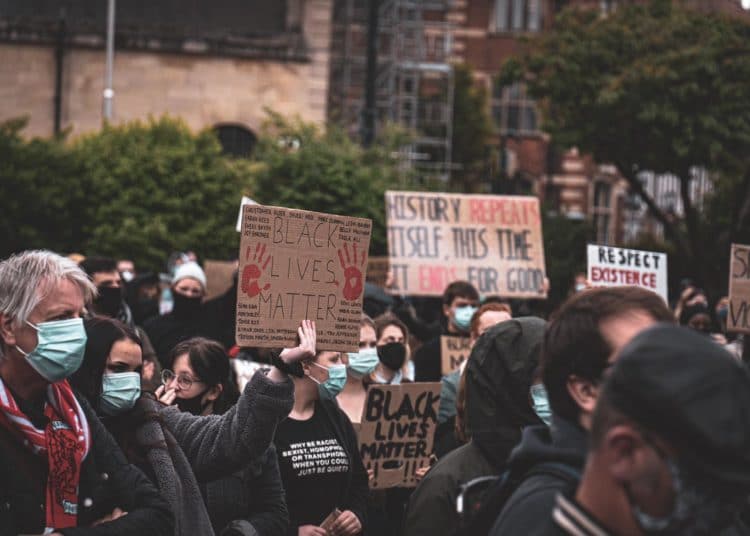 Amidst the ongoing pandemic, we are reminded yet again that systemic racism is a serious problem in the world we live in today. The murder of George Floyd and many other black men and women before him should not be swept under the carpet, should not be treated as a social media trend and should not be forgotten about.

It is time to realise that all lives cannot matter until black lives do. As a society, we need to ensure that we educate ourselves and future generations on the centuries of racism and oppression of the black community and, more importantly, how to recognise and stand up to racism in everyday life.

It is heart-breaking that, despite the recent unrest in this country and many others, there still exists a lack of understanding for the message of Black Lives Matter here in the UK. Comments questioning the need to protest for ‘a black man thousands of miles away’ have been circulating throughout social media. Posts concerning the murder of Lee Rigby have been used to challenge the rationale behind the current dissent felt by many. Concerns about the spread of Covid-19 have been used to criticise the ongoing protests.

It is this kind of ignorant attitude which, as well as being racist itself, promotes a racist way of thinking and, when passed onto younger generations, does nothing but add fuel to the fire. Perhaps, instead of questioning and criticising the movement, those people should be asking why it is people feel so strongly about systemic racism that they are willing to risk their own health to make their feelings known.

Growing up as the only black child in my primary school, I have always been aware of my skin colour, always felt ‘different’. My fellow pupils made me even more aware of this by using the n-word to offend me before I even knew what the word meant, by ridiculing my accent and the texture of my hair, and by mocking my facial features. This feeling stayed with me throughout my teenage years and is still one that I am unable to shake – the feeling that, no matter how much I preserve to create a good life, no matter how much I strive for success, I will never be good enough because I am not white.

“No one is born hating another person because of the colour of his skin, or his background, or his religion. People must learn to hate”.

Children will grow up reflecting the attitudes and beliefs of their parents and peers from a young age. Indeed, nursery-age children will pick their playmates based on their race. This is why it is vital to address the issues surrounding race early.

Even now, as I venture ever closer towards my career in the NHS, I am faced with more and more difficulties due to the colour of my skin. Despite one-fifth of all staff employed by the NHS being of black, Asian and ethnic minority (BAME) backgrounds, 15 per cent of BAME staff have reported incidents of discrimination in the workplace, in contrast to 6.6 per cent of white staff in 2018. BAME doctors are also more than twice as likely to be reported to the General Medical Council than their fellow white doctors.

So, if it wasn’t clear enough already, we are not only fighting for the murder of George Floyd, we are also fighting for every person of colour currently tackling systemic racism in every aspect of their lives.

As a white woman, it is hard to know whether I have any right to comment on issues such as the murder of George Floyd, as I am a member of the race responsible for centuries of oppressing the black community. However, nothing will change if we don’t all stand up and fight for what is right. Whether you’re black, white, Asian, Latino, this is your fight – our fight. George Floyd cannot be another statistic, another name on the long list of those who have fallen victim to racism and police brutality.

This article isn’t trying to purport that George Floyd was perfect; he had committed crimes in his life and was high on drugs at the time of his death. However, a white man in his position would not have had his neck knelt on for almost nine minutes despite being handcuffed and presenting no obvious danger. That is the point. George Floyd isn’t a martyr, but he is an example of how being black in America can cost you your life.

To those who say that protests and people’s uprisings do not incite change, ask yourselves how black people were finally emancipated from slavery; how women were finally given the vote; how Apartheid was finally dismantled in South Africa. Now, ask yourselves whether protests played no part in these fundamental advancements in civil rights. In the absence of the current protests in the US, and indeed around the world, it is hard to believe the officer directly responsible for the death of George Floyd would have been rightfully charged with second-degree murder. The judicial system cannot alone be trusted to ensure that black lives matter.

It’s important to note that this isn’t just an ‘American’ problem. Often these incidents abroad are used to sweep the systemic racism and white privilege that exists in our country under the rug. In the UK, you are ten times more likely to be intrusively stopped and searched by police if you are black. In the UK, almost all of the 72 victims of the Grenfell fire tragedy were ethnic minorities. In the UK, from 2017 to 2018 black people experienced 12 per cent of the incidents where police used force against someone, despite only accounting for 3.33 per cent of the population.

Tell me again that white privilege and racism isn’t still occurring in our country?

Who gave the “bloviating beshagged puddingbowl” permission to trash the UK?