The Festival of Debate aims to increase political discourse through virtual events, with both well-known, and grassroots activists. 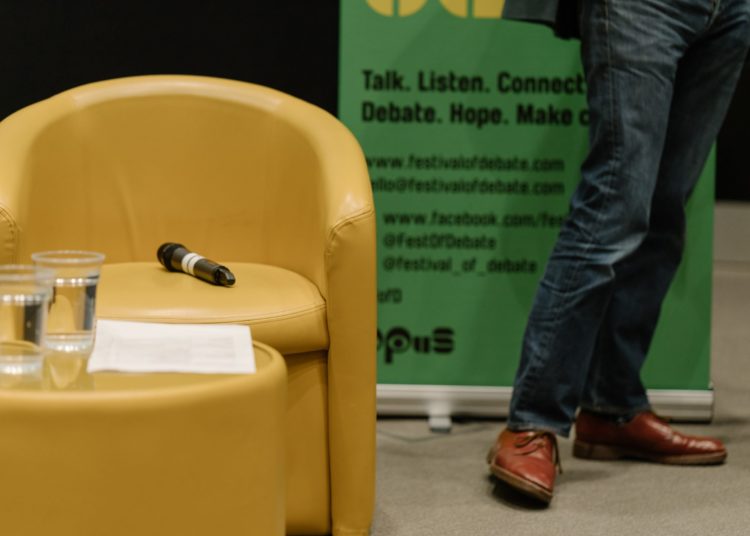 One of the largest festivals of its kind, the Festival of Debate, takes place every year in Sheffield. This year it will be ‘digital first’ and free or ‘pay as you feel’ and events will be run across the website for about four weeks. The event has an exciting lineup of guest speakers.

Festival of Debate is an annual event that strives to increase political awareness and encourage people to spark up conversations about pressing issues. The festival moves away from political apathy, with the real purpose of the project being to discuss important issues and raise activism, without party-politics discourse.

Anyone can participate in the events, and all ideas, cultures and conversations are welcome. This is in line with the values of Opus, the non-profit social enterprise that is running the festival: diversity, fairness and accessibility. Alongside Opus, over 40 partners, various campaign groups, and individuals who are simply passionate about making a difference, will also help host the festival.

In the past, the Festival of Debate has ignited passion and facilitated the creation of new political movements, such as the UBI Lab Network, a global campaign that advocates for Universal Basic Income. This is central to the festival’s purpose of finding ‘upstream solutions’, such as increasing discourse on social and political issues, are key to long-term, systemic change.

Who are the guests that will be attending the Festival of Debate?

The Festival of Debate is passionate about having well-known, credible figures taking part in their event. And that’s why this year, notable speakers including economist Yanis Varoufakis, Labour MP and Tribes author David Lammy, and writer Maya Goodfellow, will be amongst the big-name activists taking part.

Natalie Bennett, Green Party peer and writer for Yorkshire Bylines, will also be participating. She said that the Festival of Debate “continues that great tradition” of public activism and debate in Sheffield, pointing out that the city was the “first suffrage society in the UK”.

Jackie Weaver (yes that one!) will also be taking part. She told the Festival of Debate that she’s “delighted to have the opportunity” to join the events, but is even more excited about “exercising [her] new authority as chair”.

A full list of guest speakers can be found on the website, or by clicking this link.

The theme of the events

There are four central themes to the festival’s events. The following issues have been exacerbated recently by the pandemic, the ongoing climate crisis, and systemic racism, hence the importance of increasing political discourse:

What events will be available to join?

This year, the Festival of Debate has a rich programme of events, and there is definitely something for everyone. The purpose of the events are to explore original ideas, pressing issues, and give a platform to new local voices.

Below are the just a few of the many events that will take place over the course of the four weeks. These should give you a taste of the type of spectacles that will be shown. (For a full list of the online events click here.)

Sathnam Sanghera will be discussing his book, Empireland: How Imperialism Has Shaped Modern Britain, which offers a gripping and revealing account of how the British Empire greatly changed the nation. At a time when the question, ‘what does it mean to be British’, is at the centre of political discussions, Sanghera urges us to step back, look at our past, and truly understand who we are and what unites us.

Yanis Varoufakis, a world-famous economist, asks us to imagine a world with no banks, no stock market, and no billionaires, but a world where Extinction Rebellion was victorious. Would this be realistic? And if so, is it something we should strive for? Varoufakis is genius at revealing uncomfortable truths, and confounding expectations of our ‘ideal’ society.

Question Time with the now-famous Jackie Weaver, will put forward questions to local MPs, activists and commentators, where trust and transparency in democracy will be the focus. If you have a question you’d like to ask, submit them to hello@festivalofdebate.com or by tweeting @festofdebate live on the evening. The only condition? Read the standing orders!

Central to Opus’ goal of increasing grassroots ideas, there will also be a series of community-led events coordinated by local groups and charities, which will put out a public call for collaborations.

Talks, panel discussions, workshops and film screenings will be used to give a platform to local, activists.

These events will use a ‘pay what you feel’ system, so if you can afford to support the festival, you can, and if not, you can still benefit from and participate in the discussions.

‘A Bit of Earth’ project: the necessity of UK greenspaces

Lockdown has been tough for everyone, and for many, green spaces have been their lifeline. That’s why this year, the Festival of Debate have teamed up with South Yorkshire Climate Alliance to run a specially commissioned project to attempt to understand citizen’s thoughts and stories about nature and green spaces during lockdown.

Those that exchange stories and images of their walks, runs, and stories of unexpected encounters with wildlife, will receive seeds and maps from the Festival of Debate and The Bare Project, so they can create their very own secret garden with neighbours and friends, creating their own ‘bit of earth’. This will be open to people in Sheffield, Rotherham, Barnsley and Doncaster.

The Festival of Debate intends to create a place, albeit virtually, where we can connect to our communities, and to the institutions that shape our everyday-lives. No citizen’s voice should be unheard, just as no ideas are unimportant. This year, many of us have felt more lonely than before, and the festival offers an opportunity to join conversations, and engage in discussions that can change issues close to our hearts.