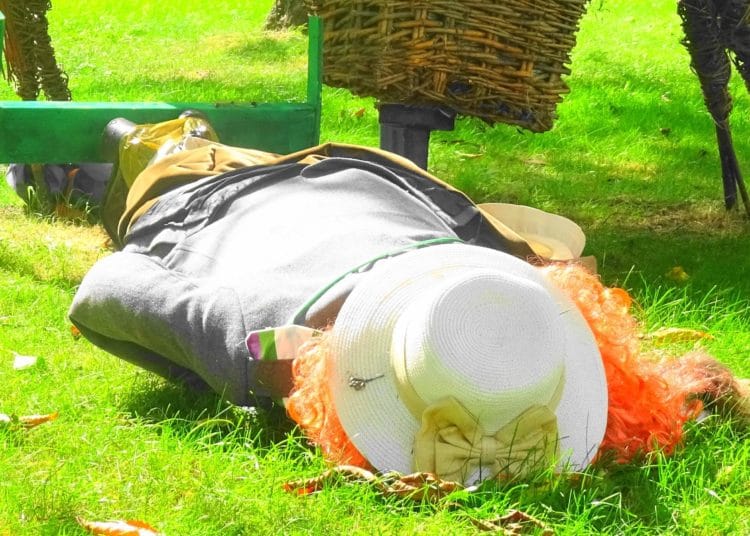 The week before the 4th birthday of the Brexit referendum hasn’t been a walk in the park for Tories escaping lockdown.

The now-you-see-him-now-you-don’t prime minister has proved he can remember things after all. After schoolchildren demonstrated how to keep him at arm’s length, he got Father’s Day done and ducked for cover when Prince William’s ‘dad and kids’ pic hit the press. The invisible sprog(s) could stay invisible. He could grunt about changing nappies while limbering up to tell the nation he was “absolutely clear” about relaxing lockdown and was off to Benidorm in the morning.

The trouble was he hadn’t told the resident mog that his services as No 10’s spokesperson were no longer needed, now that his own pa had put in for a French passport to secure the EU benefits his government had denied the rest of us. Faced with losing his pet passport, Larry the Cat @Number10Cat wanted confirmation that Mr Farage’s foray to the USA constituted an essential trip. “Can you confirm you’ll quarantine when you return?” Preferably permanently if you can’t stay there, suggested all and sundry.

Even that failed to quell pressure to release the Russia report, Grayling or no Grayling. Scandalous revelations slipped out every time a Tory set out to shaft the people yet again. Something smelt fishy as Tory darling Sunak shimmied out with post-summer cuts, and Mr Jenrick tanned himself in the park beside the fire sale of public land while decimating local democracy.

But nothing compared to the uncomprehending minister for dumb smirks, Helen Whateley, insisting that student nurses were not providing a service so she was terminating their six month covid-cover contracts.

Radio New Zealand reminded the UK that it could do better. Joshua Silver suggested that the herd immunity experiment was a criminal breach of Article 2 of the European Convention on Human Rights – the right to life – because it led to up to 64,000 avoidable deaths. “We can certainly expect prosecutions”. Desperation set in at No 10.

Teresa Villiers’ imminent expulsion from the Intelligence and Security Committee momentarily concealed the public’s mounting and indecent interest in the government’s lies over the actual covid death toll, and its tricks to keep the daily reported toll under 1,000.

Relaunching football didn’t help. Temperatures rose, and a touch of the al fresco munchies couldn’t keep either the latest covid outbreaks in abattoirs, or warnings about no-deal supply chain breakdowns and panic buying, off the front pages. Welcome to the new world of death, disease and diabolic deprivation.

Fortunately, Have I Got News For You had a scoop:

More dizzyingly still, the UK would resume a position on the world stage. As the WTO’s new head, Liam Fox, would quash scurrilous reports about US-UK-EU decade-long trade spats, and sit on Joe Biden for announcing he would end them by signing an EU-US trade deal if he won the presidential election. As WTO head, Fox could sneak in any rules he saw fit to placate the tantrum-throwing president who’d forgotten anyway that he’d threatened to walk away from a UK deal and was obsessing about nasty foreigners printing fake ballot papers come November.

The Windrush survivors’ delivery of a petition to No 10, signed by 130,000, calling for all recommendations to be implemented deflected only for a nano-second from those questioning Matt Hancock on how he’d made such a pig’s ear of the Covid-19 tracing app. Counting his fingers for re-assurance, he explained that the number of tests was not the same as the number of people tested. That didn’t end speculation as to his GCSE grades in maths and technology. Galileo was now no longer being replaced with a bottom-beating British alternative but a chlorine-fuelled one, draped in, some whispered, the stars and stripes.

“Has there ever been a more dangerously corrupt government over the last few hundred years than this repugnant bunch of Brexiters”, asked @Chrisballingall. The red wall was beginning to wonder. Labour councils had been hardest hit by a decade of austerity, compared to Conservative councils. @StuardBudd144 saved Mr Gove a job, writing on his behalf:

“Dear Northern Ireland, Scotland and Wales, I’m sorry I will voluntarily trash your economy and businesses while giving you no time to prepare but this quarter of the union (me) has made up its mind to do it anyway. Michael Gove.”

A bit like dumping Erasmus in favour of a learn-bugger-all-in-Britain app – made for Brits by Brits.

As if the PM’s addled brain hadn’t had enough, Edwin Hayward decided to recall 77 examples of the losses inflicted by the PM’s reckless approach to post-brexit arrangements with the EU.

A few less-than-loyal Tories got out the red diesel to prime their tractors for the independence day blockade of Parliament Square. Betting on the welly-throwing championships hadn’t quite matched the £8bn bet on a no-deal crash by Brexit hedge funds and foreign Tory Party backers, but excitement over re-showing the PM’s Tory leadership bid on the big stage was mounting: “British made French knickers going to France” would be no more. Another wave of Sasha de Pfeffel Johnson’s Isle of Man kipper would put paid to EU Commission vice-president Dombrovski’s planned digital tax on Facebook, Amazon and co. After all, it was “oven ready”. Shame it matched the Big Orange Baby’s 50 shades of naranja.

How to dig ourselves out of an enormous economic hole