Despite a campaign of intimidation and brutal violence by the regime of the man who has ruled the country for the last 26 years, the will of the people for change has only grown stronger. 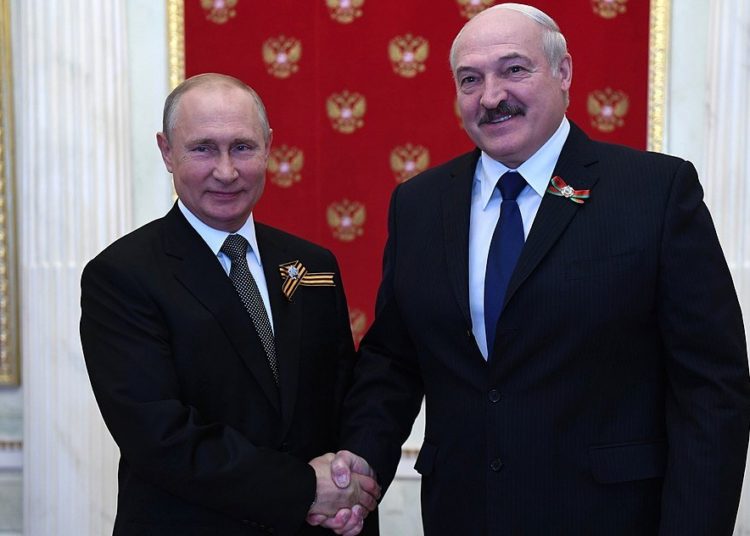 Russia’s President Putin and Aleksandr Lukashenko, the self-proclaimed victor of Belarus’s disputed election of 9 August are meeting today (14 September) in Sochi, in a bid to agree how closure can be brought to the accelerating demands of the Belarusian people for the incumbent president to go.

Despite a campaign of intimidation and brutal violence by the regime of the man who has ruled the country for the last 26 years, the will of the people for change has only grown stronger. Yesterday, over 100,000 people joined the ‘March of Heroes’ which advanced on Minsk’s fashionable suburb of Drozdy, home to the political and administrative elite and Lukashenko himself. The protesters were met with water cannon and airguns from security forces when the marchers tried to free some of the 400 or so who were beaten, arrested and thrown into police vehicles. Unable to reach Lukashenko’s residence, the marchers then turned back to the centre of town where they have congregated every weekend since the disputed elections.

Last week has seen the arrest of the opposition politician, Mariya Kolesnikova, who tore up her passport rather than be forced into exile to Ukraine. It has also seen the abduction and forced exile of fellow-activists Anton Rodnenkov and Ivan Kravtsov, the beating-up of protesting university students returning for their new term, the continued closure of all borders other than with Russia, and intermittent blocking of the internet and social media. Nevertheless, strikes and general defiance have been spreading throughout Belarus’s major cities, particularly in the economically significant state enterprises.

With almost all members of the opposition coordination council now in exile or detention, the revolt has still not been quelled, and Lukashenko may now be forced to call on Russian military help to secure his continued rule, or worse, allow Russia to annex Belarus and enforce order directly. Either way, the people of Belarus are unlikely to accept Moscow’s interference lightly, as one of their slogans at Sunday’s march proclaimed: “We won’t let him [Lukashenko] sell the country”. Ironically, Lukashenko would rather not sell the country either, for to do so would make him, at best, subservient to Putin or, at worst, completely redundant.

Meanwhile, Putin has been attempting to quell dissent at home with mixed fortunes. Protests in the far-east city of Khabarovsk at the arrest in July of the popular governor Sergey Furgal on trumped-up charges have continued, albeit at a lower level than before. In Moscow, over the last several weeks, protests have been staged at the refusal of the authorities to allow opposition candidates to stand in local and regional elections. On 10 August, for example, a crowd of 50,000 Moscovites gathered on Prospekt Sakharova in support of those disqualified from the city council’s elections on 8 September. Despite the peaceful nature of these protests, over 2,700 were arrested. The slogans on the protesters’ banners reflected their demands: “Let them out! Let them run!” The demonstrators were joined by a selection of well-known cultural figures, including prominent representatives of youth culture such as sports journalist and YouTuber, Yury Dud and rapper Oxxxymiron. Although most real opposition candidates were not allowed to run, the number of votes for the ruling United Russia party was considerably reduced and a handful of incumbents, such as Sergey Zverev, in charge of urban planning at Moscow City Council, unexpectedly lost their seats.

Putin’s main boon over the last few weeks has been the removal from the political scene, at least for the moment, of his main opposition challenger Alexey Navalny, who was mysteriously poisoned with the nerve-agent Novichok on a flight from Tomsk to Moscow on 20 August. Navalny had been campaigning for opposition candidates for the regional elections held yesterday. He and his team had developed a ‘smart-voting strategy’ whereby an app helps those who wish to vote against the United Russia party’s candidates find out the best-placed candidates to beat them. With results expected later today (14 September), it remains to be seen how successful this strategy has been nationwide, but early results from Tomsk indicate that the strategy has enormous potential, as United Russia appear to have only won 12 of the 37 seats, while in Novosibirsk, some of Navalny’s supporters have been elected. This destroys the myth that the opposition is confined to the chattering classes of Moscow and St Peterburg. Clearly, United Russia will hold on to most of the rest of the country, but it is weakened and with it Putin himself.

Given that Putin is no longer the popular strongman he once was, what he does with regard to Belarus will have consequences at home and abroad. If he annexes Belarus, he will alienate its people and alarm and provoke the international community. He will also be incorporating a rebellious province whose inhabitants might inflame nascent rebellion in other parts of the Russian Federation. If he does nothing, however, it will only be a matter of time before Lukashenko falls, as the genie of freedom is well and truly out of the bottle, and this too could give succour to Putin’s own challengers in Russia.