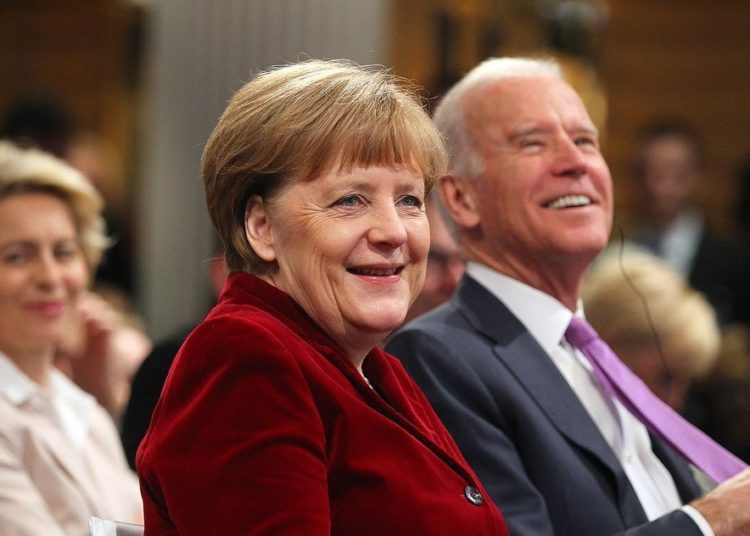 Image by munsecconf for Creative Commons

Simply by not being Trump, Biden is assured a welcome in Europe. Biden has already announced he will reverse Trump’s withdrawal from the World Health Organization and the Paris Agreement on climate change.

Trump’s hostility to multilateralism is not a recent policy but was an aggressive intensification of the USA’s long tradition of isolationism. This only changed as late as 1945 when at the end of World War the USA engaged with Western Europe with the Marshall Plan and the founding of NATO. This engagement was fundamentally reassessed after the fall of the Soviet Union.

Since 1945, the USA had been a supporter of European integration under what has become the EU. But as the Cold War thawed then melted away, the USA became increasingly concerned by the growth of a trade rival that had developed into a larger internal market than the USA.

After acceding to the Common Market in 1971, Britain used the ‘special relationship’ as a basis to be ‘America’s best friend in Europe’. Certainly Britain’s usefulness to the USA was confirmed by that formidable Anglophobe, General De Gaulle, whose “non” to British accession to the then Common Market was founded on his belief that Britain would be “America’s Trojan Horse in Europe”. De Gaulle not only meant in the military sense, but also, he feared Britain as a bridgehead for Anglo-Saxon capitalism, too. Thatcher’s view that the EU should remain only a “common market”, did much to vindicate De Gaulle’s apprehensions.

Trump raised the temperature of the USA’s concerns about the EU emerging as a trade rival and turned it into downright hostility. In addition, he was hostile to the USA’s own creation, NATO. Trump’s defeat seems to ensure that anti-EU hostility will end, much to the relief of Germany and France both of whom have invested much of their ambitions in the EU.

As soon as Britain voted to leave the EU, the race was on to be the USA’s best friend in Europe. And although every European country has its heritage lobby in USA, it is really only a two-horse race between Germany and France – for in politics, and certainly as far as the USA sees the world, size matters.

France’s relationship with the USA remains problematic. The French contributed decisively to American independence, albeit largely to spite the English. The USA helped liberate France in two world wars. Yet French anti-Americanism remains palpable. Even so, when Trump won the 2016 election, Macron was eager to flatter his ego by giving him a reception in Paris to match Trump’s megalomania.

Germany had a long tradition of emigration to the USA; but the strong German lobby in the USA was dealt a fatal blow by two world wars. After the Second World War, the USA undertook massive efforts to ‘re-educate’ the Germans in the ‘American Zone’ (mainly West Germany south of the River Main). Nowadays, the links between the West German political elite and the USA are stronger than one might expect at first sight.

Biden has been greeted with relief on the continent, rather than the enthusiasm that greeted Obama. For this reason, a prominent role for Obama in rebuilding transatlantic links would be a good idea.

Meanwhile, what Brexit Britain gets from Biden will depend very much on what emerges of the UK/EU trade deal. It’s clear that a US deal with the EU is more important for Biden.

So, we shouldn’t get too excited about Biden. His main merit is much like Macron’s – he’s a centrist, who is infinitely preferable to his populist extreme-right-wing opponent. And if Biden were in Germany, he’d be very happy as a practising Catholic in Merkel’s conservative “Christian Democratic Union”.

The one country that can claim a genuine ‘special relationship’ with Biden, that can use this to become an intermediary between Biden and Europe, is of course Ireland. When a reporter tried to get his attention by naming the BBC, Biden jocularly responded shot back “I’m Irish”. The Irish have skilfully played a role as being “Anglophones but not the Brits” in EU’s external relations.

International relations abhor a vacuum and Brexit has created one for others to step into.