It could be said that the recent celebration of VE day was timely; it has acted as a stark reminder of where patriotic nostalgia can lead 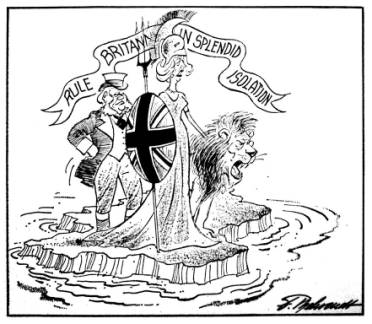 It is a thin line between national pride and jingoism. If it was not clear already, the UK appears to be dangling its feet into the territory of the latter. But at what point did the line get crossed?

Perhaps it was when the government refused, on two separate occasions, to participate in an EU-wide PPE procurement scheme? Or was it when charitable endeavours were glorified to cover up the lengthy 10-year neglect of the NHS? Or maybe after the 400th time a war metaphor was used in the vain hope that repeating the words battle and frontline enough would somehow conjure up some sort of Dunkirk miracle?

In the context of a build-up of isolationist and patriotic mentality, it could be said that the recent celebration of VE day was timely; it has acted as a stark reminder of where patriotic nostalgia can lead. On the one hand, it allowed for a brief moment of collective reprieve in an honouring of the monumental sacrifices of the war generation.

On the Friday, in a street opposite my house, neighbours cautiously celebrated. They stood together, Union Jack bunting overhead, champagne in hand, nervously clutching to some semblance of normality. I forgave them. Social distancing fatigue is inevitable when the population does not trust the government to be carrying out their side of the bargain.

The government will have no doubt viewed these celebrations as a way of uniting the nation and scraping together some remnants of support for their hopeless mishandling of the crisis. Arguably, there is nothing malicious about this, since the ‘stay at home, protect the NHS’ message could be strengthened by tugging on the population’s patriotic heart strings. But such a tactic, as has been the theme of the government’s response, is cosmetic and short-lived. VE day nostalgia will wear off rapidly, and with it any rose-tinted views of the state.

There are only so many Churchill speeches you can listen to before reminding yourself that a global pandemic requires a different sort of approach to that of a world war, no matter how much heavy artillery you have at your disposal. More importantly, even if the wartime rhetoric were to lead to a greater adherence to distancing measures, it would be no substitute for a robust approach involving testing, tracing and adequate supplies of equipment.

In fact, it is precisely this isolationist mentality that has heavily contributed to the dismal plan of action (or rather inaction). Why else would the government, in the context of massive shortages, reject the opportunity to take part in a European wide PPE import and distribution program? And prior to that, what motivated the dismissal of World Health Organisation advice, opting not to follow the lockdown trend across the world and favouring instead the infamous herd immunity strategy? One could trot out the typical, but by now meaningless, drone of ‘we were just following scientific advice’, but you would be hard-pushed to find anyone who still believes such drivel.

The reality is that behind such appalling policy-making lurks an unwavering belief in Britain’s supposedly unique ability to prevail in the face of adversity. This island mentality has its roots in Britain’s imperialist past, but it was cemented by events during the Second World War, culminating in VE day. Specifically, historians such as Vernon Bogdanor have written that despite the massive loss of life in battle, the UK avoiding occupation by fascist forces during the war was enough to keep the isolationist island mentality intact.

Of course, this view of events is ludicrously unbalanced. If VE day is a reminder of anything, it should be that in the face of adversity, collaboration is the most effective tool. The impact of fascism would have been far more widespread had an alliance not been formed with a common objective. The same logic must be applied to coronavirus. There is both a moral imperative and a self-interest motive for countries to collaborate, in terms of sharing knowledge as well as shouldering the economic burden equally.

Of course, Britain is not the only state culpable of a toxic isolationist mentality; aside from the obvious contenders across the Atlantic, in Europe it is Germany and Netherlands who are the other frontrunners. Their rejection of ‘corona bonds’, an idea to transfer the debt burden of crippled states like Italy, to a Europe-wide debt, is evidence of a similarly dangerous jingoistic mindset. The difference being however, that at least their every-man-for-themselves logic has been founded on a basis of demonstrable progress against the virus within their borders.

Although by no means an excuse for a lack of solidarity, it does serve to further expose the absurdity of Britain’s isolationist stance. Instead of being based on tangible progress markers like medical supplies and reduced suffering, the UK government seems to have convinced itself success has its foundations in an empty rhetoric of war metaphors and heavy gesticulation.

Having spent the beginnings of the coronavirus pandemic under lockdown in Spain, a country which among others had taken quick and drastic steps to attempt to contain the spread, my perplexity at Britain’s stubborn response was well-founded.

It seemed ridiculous that I was sealed in my flat with armed soldiers patrolling the street, whilst my friends and family were continuing with their lives as normal. My friends in Spain were as confused as I was: “But, do the English not understand? People will die” They were very right indeed. From the outset, Britain has adopted a scarily nonchalant attitude, veering from the policy norms of neighbouring states.

VE day has prompted an unwelcome epiphany that the strategy owes itself in part to a Britain firmly grounded in an unshakeable island mentality, an attitude which has propelled it to the country with the highest number of deaths in Europe. Splendid isolation? I’m not so sure.