Truth is the first casualty of war. There are lies behind some of our most treasured photographs and they take decades to unravel. 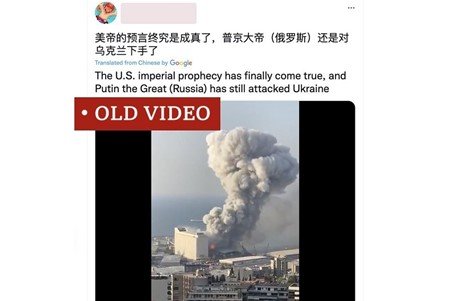 Minutes after this Chinese newsflash, the World Wide Web revealed that a movie posted in China to record ‘Putin the Great’ bombing Ukraine in 2022 was really a movie of burning ammonium nitrate in Beirut in 2020.

When the Israeli human rights activist Hananya Naftali filed the image below of President Volodymyr Zelenskyy on 25 February 2022, 72,000 of his Facebook followers shared the picture and its caption: “This is the President of Ukraine Zelensky. He took off his clothes and put on a military uniform to join the troops in fighting to protect the Ukrainian homeland. He is a true leader.”

It took a Nigerian reporter to show that Zelenskyy was actually nowhere near a Donbass slit trench on the second day of the Russian invasion. Segun Olakoyenikan of Agence France Presse reported for AFP Fact Check that, “A reverse image search for the Facebook image published by Naftali led to the original on global photo agency Getty Images. It was taken on Ukraine’s Armed Forces Day on December 6, 2021”.

Truth is the first casualty of war: “Falsehood flies … Truth comes limping after it”

Few have described the speed and stopping power of a lie better than Jonathan Swift, writing in The Examiner in 1710:

“Besides, as the vilest Writer has his Readers, so the greatest Liar has his Believers; and it often happens, that if a Lie be believ’d only for an Hour, it has done its Work, and there is no farther occasion for it. Falsehood flies, and the Truth comes limping after it; so that when Men come to be undeceiv’d, it is too late; the Jest is over, and the Tale has had its Effect.”

There are lies behind some of our most treasured photographs and they take decades to unravel.

The iconic Reichstag photo: not what it seemed

No one in Moscow in 1945 dared to reveal that there were no actual Russians in the epic picture of three unnamed Soviet soldiers raising a hammer and sickle on the roof of the ruined Reichstag during the final Battle of Berlin that killed 81,116 Soviets.

Stalin had seen Joe Rosenthal’s partly re-staged picture of six US marines raising the stars and stripes at the summit of Mount Suribachi on Iwo Jima on 23 February 1945.

Yevgeny Khaldei, a Jewish naval officer from Yuzovka, now Donetsk in the Ukrainian Donbass, was flown into the Battle of Berlin with orders to take some kind of a victory picture for May Day. He took his Leica III and a flag sewn by his uncle from three tablecloths and climbed on to the Reichstag roof with three randomly chosen soldiers.

The soldier who attached the flag was Ukrainian Alexey Kovalyev, 18, from Kyiv. A red flag inserted in Germania’s crown in the dark on 30 April had been torn down by the Germans on 1 May. On 2 May, up on the roof under German fire, were the Ukrainians Khaldei and Kovalyev with Senior Sgt Abdulkhakim Ismailov, from Muslim Dagestan and Leonid Gorychev from Minsk in Belarus. It would be 1995 before Ismailov could be named and created a Hero of Russia.

Back in Moscow, the editor of Ogonyok told Khaldei to paint in some dark smoke and scrape the picture with a needle to remove what looked like a second wristwatch on Ismailov’s right arm. It might well have been an army compass but looting from dead soldiers was officially a death sentence.

The Falling Soldier: challenged as a lie for 60 years

General Franco’s publicists challenged the truth of Robert Capa’s photograph of the Falling Soldier as soon as it was published in France in September 1936 and again by Life in New York in September 1937.

The Sunday Times investigative reporter Philip Knightley rashly claimed in his 1975 classic, The First Casualty: The War Correspondent as Hero, Propagandist, and Myth Maker from the Crimea to Vietnam, that a South African Daily Express reporter had admitted helping Capa to stage the picture when the guns of the Spanish Civil War were silent.

That lie was still festering in 1996, when Ricard Bañó, a historian from Alcoy, near Alicante, managed to prove that the Hungarian photographer Capa really did huddle in a gully at Cerro Muriano on 5 September 1936, holding his Leica blind above his head and snatching the most famous war photograph of all time.

Capa’s biographer Richard Whelan noted in 2002 that post-Franco government records now show that Federico Borrell García was the only soldier of the Columna Alcoyana killed on 5 September 1936.

Faked photo from the 1926 general strike

Women turn their hand to shovelling coal. This lie from 1926 was re-published as recently as 30 May 2018, in the Guardian to record the fact that 2017 saw the fewest number of days lost through strikes in the UK since 1893 “despite the worst period of wage growth since 1815”.

The caption was: “Female engine drivers turn their hand to coal shovelling during the general strike of 1926. Photograph: Fox Photos/Getty Images”

In fact, these were fake female engine drivers with slightly dirty faces modelling for Fox Photos of Fleet Street to suit an American newspaper with alarming ideas about British railways.

Neither Getty nor the Guardian has ever replied to my questions about pictures filed on The Fox / Getty web pages and listed as released or circulated on 1 December 1926, long after the end of the general strike on 12 May 1926.

There is simply no record of any woman ever driving a mainline locomotive in Britain before 1978, the year the valiant ASLEF trades unionist Karen Harrison became Britain’s first woman train driver at the Old Oak Common diesel shed. 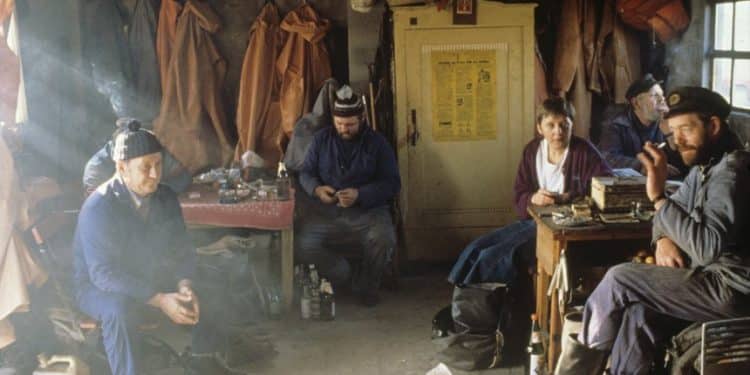 Clues that reveal the lie

The Fleet Street stringer commissioned to illustrate this American fantasy appears to have blagged his way on to the tender of an immaculately cleaned locomotive with the sickeningly appropriate name of Pretty Polly.

A real railwayman hides his face from the ‘women drivers’ wearing clean and shiny court shoes, with heels and no socks, and pearl necklaces under clean railway jackets that show creases from storage.

There are artfully placed greasy finger marks on the cheek of the woman wielding a coal pick – which she’s holding the wrong way round to attack some coal that didn’t need breaking.

The business partners at Fox Photos in 1926, Mr Fox and Mr Salmon, were based in Tudor Street, off Fleet Street, supplying the international market. Their catalogue caption gives the game away.

“Women Drive Trains During General Strike. The women of England take over the duty of driving the nation’s trains during the General Strike of 1926. (Photo by © Hulton-Deutsch Collection / CORBIS / Corbis via Getty Images)”

The ‘ladies’ as they are sometimes described in the picture captions, posed for Fox in the Kings Cross engine sheds of the London and North Eastern Railway in late 1926 when the famous ‘Top Shed’ was clearly very busy.

Top Shed was a maintenance and stabling depot just north of King’s Cross railway station on the far side of Regent’s Canal and would have been very quiet during the general strike.

The railway engine was LNER 2560, built in 1925 and named after a racehorse that won the Oaks, St Leger and the Thousand Guineas in 1904.

Pretty Polly was a heavy A1 Pacific, designed and built for long distance expresses on the main line from London to Edinburgh. Very few main line trains ran during the general strike and none was ever driven by a woman.

I have not been able to find a record of any woman driving a steam locomotive of any kind during the general strike. Ninety percent of the rail network was shut down for the nine days of the strike.

The encyclopaedic Railway Wonders of the World, summed up in 1935:

“In retrospect, the General Strike has attracted its fair share of myths … [for example] the legend of the volunteers who are supposed to have mastered the complexities of railway operation overnight. For weeks after the strike the newspapers printed pictures of eager young men, clad in gaudy sweaters and plus-four suits, loading mail-bags or manning signal boxes, while middle-aged businessmen fulfilled a life-time’s ambition and lived out their fantasies as begrimed and sweaty footplatemen.

“But driving an engine calls for greater skill than driving a car. It was one thing to allow medical students to career around in buses to the delight of their friends and the terror of their luckless passengers, it was quite another to turn them loose on the railways.”

There were some very tough women on footplates in the great days of main line steam locomotives, but that was in Russia and never in England.

Robert Doisneau, who admitted staging an ever-popular photograph of a kissing couple on a Paris street, warned us, in English, that: