Last week, Donald Trump signed an executive order to send federal troops into Portland, in yet another attempt to clamp down on the free speech of his opposition. 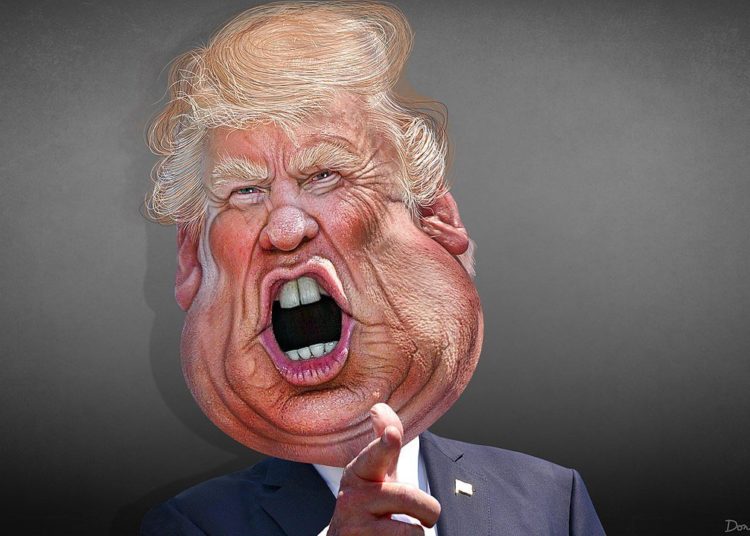 Last week, Donald Trump signed an executive order to send federal troops into Portland, in yet another attempt to clamp down on the free speech of his opposition. This is only the latest in a string of events over the last four years that have violated the very principles on which the United States’ constitution was written. The legacy of Trump’s presidency will be the erosion of the value of the US government’s founding doctrines. If past precedent is anything to go by, we should be taking his incessant tweeting about the ‘fraudulence’ of the upcoming election pretty seriously.

Few things are held in such high esteem by Americans as their First Amendment rights to free speech and the system of checks and balances that underwrite the democracy of their government. Trump presents a challenge to both of these values and, in the short four years he has been in office, has managed to consistently undermine the systems of government that seek to uphold them.

With a history dating back to before his election in 2016, Trump has managed to evade accountability for his actions time and time again. Despite a mountain of evidence to suggest that he did in fact withhold military aid from Ukraine in return for dirt on his opposition candidate, constant interfering with witnesses and the fact that many of his own party suspected him to be guilty of the offense, Trump was acquitted in 2019 by the Republican-majority Senate. Life was soon back to business as usual for the president.

The Mueller investigation into Trump’s alleged role in Russian interference in the very decision that made him president told a similar story. The investigation made headlines for months, until a heavily redacted report freed Trump of any accusations of criminal activity, despite all the evidence to the contrary. The un-redacted version has to date not been seen by Congress, as Trump’s exertion of ‘executive privilege’ has stopped it from being passed over to them.

It is rather ironic that Trump has managed to wangle so much power over investigations that he is at the epicentre of. This hypocrisy was exemplified again earlier this month, when the president commuted the prison sentence of Roger Stone. Trump was undeterred by the fact that Stone’s crimes included obstruction of justice, witness tampering and lying to Congress in the Mueller investigation. Stone has effectively been rewarded by Trump for lying on his own behalf.

There is a similar pattern to each of these incidents. Trump’s follies tend to capture our attention temporarily, but we soon forget how important they once seemed and move on to patiently waiting for the next corruption scandal.

Brian Beutler of Crooked Media, has branded this Trump’s ‘incompetency dodge’ and argues that, in viewing the events of Trump’s presidency as some kind of farce, we are detracting from the real damage he is doing. Trump’s comedy show is strongly undermining the ability of the US government to scrutinise its executive branch and hold its leader to account.

Although the technical jargon of corruption investigations and impeachment trials can be easy to switch off from, the blatancy with which Trump has been undermining free speech rights more recently, is much harder to misinterpret as mere incompetency.

Since the eruption of Black Lives Matter protests in late May this year, Trump has consistently capitalised on the protests as an opportunity to vilify his opposition in the run up to an election he currently looks set to lose. Many of those that Trump has labelled as ‘anarchists and left-wing extremists’ are peaceful protesters, whose speech is not dangerous or hateful. Executive orders are a power of the presidency that can to be used to enforce and execute existing laws. However, Trump’s most recent action in Portland goes far beyond this lawful intent. Targeting people for their point of view, before they have even had a chance to express it, is a violation of rights, not a duty to the law.

Add to this his recent call to exclude illegal immigrants from the national census, his strop over the Mexico border wall that resulted in a 35-day government shutdown, and the ongoing secrecy around his tax receipts. In fact, it is hard to keep to a reasonable word limit in the course of detailing all that Trump has done to undermine judicial practise and democracy in his term as president.

Donald Trump has proved that it is possible – with enough audacity – to evade any level of scrutiny or accountability in the White House. First Amendment rights are losing their pull and the practise of impeachment has in effect been made redundant. In 1974, when Richard Nixon faced impeachment hearings over the Watergate scandal, he resigned before the proceedings concluded, knowing that the evidence against him would require members of his own party to stand against him. Clearly, these rules no longer apply. Partisan politics have polarised to such an extent that party loyalty is now prioritised over justice.

In recent weeks, Trump has made it clear that he expects the upcoming election to be ‘the most corrupt’ in the nation’s history, leaving many fearful that he will not step down lightly should he lose the vote in November. Twitter actually fact-checked Trump’s tweet about the fraudulence of postal voting, given the complete lack of evidence to support any of his claims. The social media giant has largely refrained from fact-checking the president’s tweets in the past, likely out of fear for the consequences for the company if they were to do so. Another dose of irony.

Perhaps Trump is merely setting out a convenient scapegoat for his potential defeat, in order to make it less embarrassing were he not to be re-elected in November. However, events of the past show that neither Trump nor his flock of Republican sheep have much respect for the democratic processes laid out by the founding fathers 300 years ago. The Democrats may very well need a plan for an incumbent president who refuses to accept an election result. Trump’s incompetence cannot continue to be taken lightly.