Jack Walker highlights the importance of impeaching President Trump and what it will mean for Joe Biden during his 'honeymoon' with Congress. 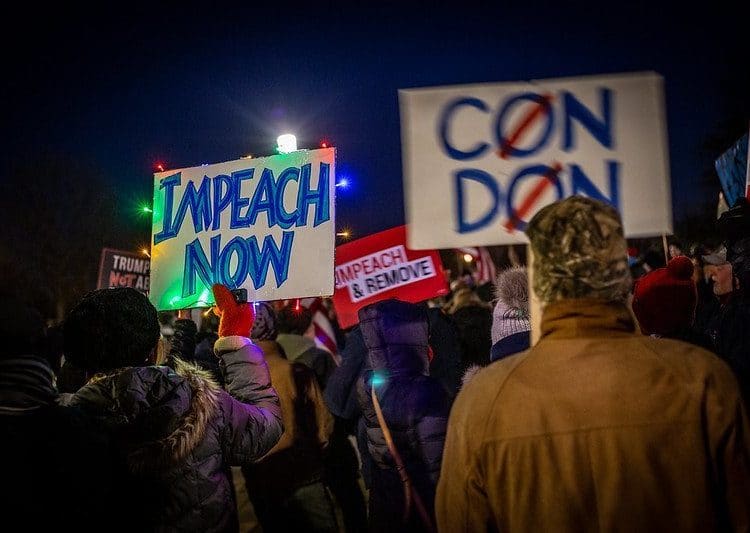 "Impeachment Rally" by Phil Roeder is licensed under CC BY 2.0

The burning question in American politics could spell difficulty for the Biden administration before it even gets going.

The Trump administration is continuing its trend of setting incredible firsts, despite being defeated in the 2020 presidential election. With the House of Representatives voting to impeach Donald Trump again, the outgoing president now becomes the first in American history to have been impeached twice – in just one four-year term. The problem facing the Democratic Party now is when to send the article of impeachment to the Senate from the House, thus beginning the process of a Senate trial and potential conviction of President Trump.

Plenty of people are asking why Democrats are even bothering to impeach President Trump, given that he leaves office in five days anyway. Removing him from office now seems like a great deal of effort; why not just let his term expire? The answer lies in the fact that the punishment of impeachment and conviction goes beyond simply removing a sitting president from office. It will allow the Senate to vote on whether President Trump would be allowed to run for office again, with only a simple majority needed to make a decision. It also means he loses his presidential wage and pension – in short, any privileges he would continue to receive after leaving office are denied to impeached presidents, except for continued Secret Service protection.

Impeaching Trump even after he leaves office also sets an important precedent – that leaders of the United States still have to face responsibility for their actions over their presidential term, even when they have left office. For the people who believe that President Trump was responsible for firing up the crowd that attacked the Capitol on 6 January, his impeachment and conviction, whether he is still in office or not, will serve as a reminder to future presidents that they do not give up responsibility of their actions once their time in office is over.

The obvious answer might be to send the article of impeachment now, beginning the trial as soon as possible and hopefully ending it with a vote before the inauguration on 20 January. However, Senate Majority Leader Mitch McConnell, a Republican, has already stated that he won’t be holding another impeachment trial before President-elect Biden’s inauguration. This may be as a result of a several Senate Republicans publicly condemning Trump’s actions since Election Day, suggesting they might be prepared to vote in favour of impeachment. With the recent Democratic victories in both of Georgia’s special elections, the Senate will be split 50-50 between the two parties.

Impeachment conviction rules state that a two–thirds majority is required to convict a president in a Senate trial. This means that 17 Republicans would be required to vote in favour of impeaching one of their own. If the New York Times is correct in identifying 20 Republicans who would vote in favour of impeachment, the two-thirds threshold will be achieved, and Donald Trump would become the first president to be successfully impeached and convicted. It makes sense that the current Republican Senate majority leader would be highly unwilling to send a president of his own party to face a plausible Senate conviction – even if Mitch McConnell’s personal loyalty to President Trump is beginning to wane.

If the majority leader won’t take up impeachment now, then it will have to wait until at least 19 January, when congressional recess ends and lawmakers return to Washington. By not holding a trial immediately, Mitch McConnell would essentially be stalling the impeachment process by making Democrats wait. But this option comes with its own problems. A clash of priorities could quite easily come about between the three Democratic leaders – Speaker of the House Nancy Pelosi, incoming Senate Majority Leader Chuck Schumer and President-elect Joe Biden. Congressional Democrats will likely want to impeach Donald Trump quickly when he has left office, bringing an end to the saga that was the Trump administration. It would not be at all surprising to see Nancy Pelosi send the article of impeachment to the Senate on the day of – or the day after – Joe Biden’s inauguration.

However, a newly sworn-in President Biden might have a different opinion. He has continually dodged questions from the media regarding Donald Trump’s second impeachment, instead preferring to focus on his own agenda over the next four years. His priorities will be enacting the legislative programme that won him the 2020 presidential election. For him, the impeachment trial of the president who just left office will distract from the Biden administration and keep the headlines focused on the Trump administration – even though it will already be over. Essentially, Biden would rather keep the headlines focused on the administration’s legislative agenda making its way through Congress, rather than giving more media time to former President Trump.

Biden, therefore, might ask Congressional Democrats to withhold Trump’s impeachment trial until after his first 100 days in office, as this tends to be a honeymoon period – the period when a new president can push through a significant amount of legislation with generally less opposition from Congress. Biden could push through the important parts of his agenda and achieve his top priorities first, and then ask the Senate to receive the article of impeachment from the House. However, it is even less likely that there would be an appetite to revisit anything to do with President Trump after 100 days of a new administration than there is now – and Trump’s term hasn’t even ended yet. The Biden administration might well be riding the crest of an approval-rating wave after 100 days in office, and therefore be unwilling to drag the country through another impeachment trial.

Ultimately, the decision of when to begin a Senate impeachment trial against the outgoing president falls upon Congress and Congress alone. Joe Biden – either before or after his inauguration – can attempt to persuade the speaker of the House and new Senate majority leader to delay the impeachment trial in an attempt to get his agenda passed through Congress first, if he thinks that is the best course of action, but cannot intervene in the process. Between these three top Democrats, a date for an impeachment trial will eventually be set. When they try Donald Trump again, however, is still very much up in the air.