You don’t have to be a woman to recognise, in that five-foot woman, a truly exceptional human being. Her life is already well documented. 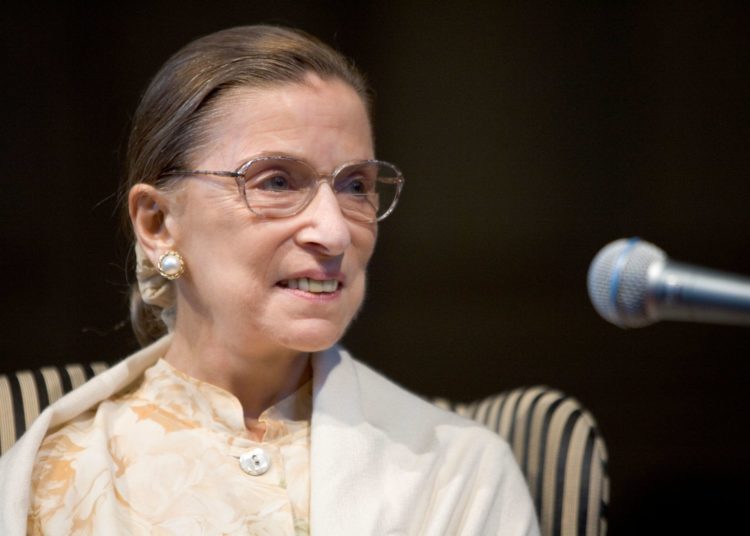 It is such sad news that Ruth Bader Ginsburg has died. This is obviously not going to be an obituary (there will be plenty of those for us to read); it is intended as a personal tribute by someone who never met her, never heard her speak in person, never even saw her in person; a tribute by someone who knows this was a very special individual. For me she is in the Nelson Mandela category (the highest possible accolade of all).

You don’t have to be a woman to recognise, in that five-foot woman, a truly exceptional human being. Her life is already well documented. How, like all women (and quite legally at the time!) she suffered blatant sexism – in her legal studies and work – including being demoted when she was pregnant. She could have been forced by the sheer weight of society and the law to give up, like her mother. She could also have chosen to give up under the constant pressure. How intimidating it must have been as one of nine female law students, each to be made by the principal to stand up before 500 male students and explain why they could possibly justify taking away the places of nine male students. How galling to be forced into academia by her inability to find a legal position, as they were all reserved for men. She could have become an anti-establishment activist militant.

She chose instead to use the law. She was top in her studies and became a respected academic, a leading advocate and a distinguished Supreme Court justice. She once said, in answer to the hackneyed question as to how she would like to be remembered:

“As someone who used what talent she had to do her work to the very best of her ability, and to help repair tears in her society, to make things a little better through the use of whatever ability she has”.

It will not only be women in America who think that “a little better” rather understates how she will be remembered, given what she achieved – things may still be far from perfect, but goodness she certainly helped to make things “a little better” and so much more.

She described how, “The law is a consuming love for me” and told law students, “If you want to be a true professional you will do something outside yourself … something that makes life a little better for people less fortunate than you”. In this advice, she demonstrated how much she believed that the law should be used in the cause of justice and mercy.

It was not just her humanity that shone through, but her modesty too. She never over-claimed her achievements, such as winning a series of five gender equality cases before the US Supreme Court, thereby building up the cause of gender equality to be recognised in law. The aim, as she put it, was to implant in the minds of the male judges “how they would think they would like the world to be for their daughters and granddaughters”.

As a male member of a wonderful extended family shared with my two older sisters and comprising mainly women; as a father of a daughter and a son; and as a grandfather of two granddaughters and a grandson, I can agree with her psychology. It concentrates the mind wonderfully as to how as a male you would like the world to be. As she said, “Fight for the things that you care about, but do it in a way that will lead others to join you”.

But it would be a mistake to focus only on her phenomenal contribution in challenging the discrimination of women. In another major gender-equality case, she represented a young widower who had been refused, after the death of his wife and because of his gender, the social security rights for caring for his minor children, as these at the time were reserved only for women. She believed “gender based discrimination harms everyone”.

The ‘notorious RBG’ tag became in her later years a bit of fun for this very serious person, who was so genuine and inspirational to so many. ‘Notoriety’, even to opponents to all she stood for, isn’t really what characterises this remarkable individual, but it helped her become a well-loved icon. After all, this is a person whose appointment to the US Supreme Court in 1993 was confirmed by 96 to 3!

Ruth Bader Ginsburg – you said you hoped to be remembered as someone who helped to make things “a little better” – not just for women and not just in America. I wish I could tell you that you succeeded way beyond that. As one of your admirers said many years ago “you changed everything”.

My trip … to the emergency department (and what I learned)