The stand-off between the official ‘winner’ of Belarus’s rigged presidential election, Aleksandr Lukashenko, and the growing coalition of opposition groups has been continuing this week in Minsk and other towns and cities throughout the country. 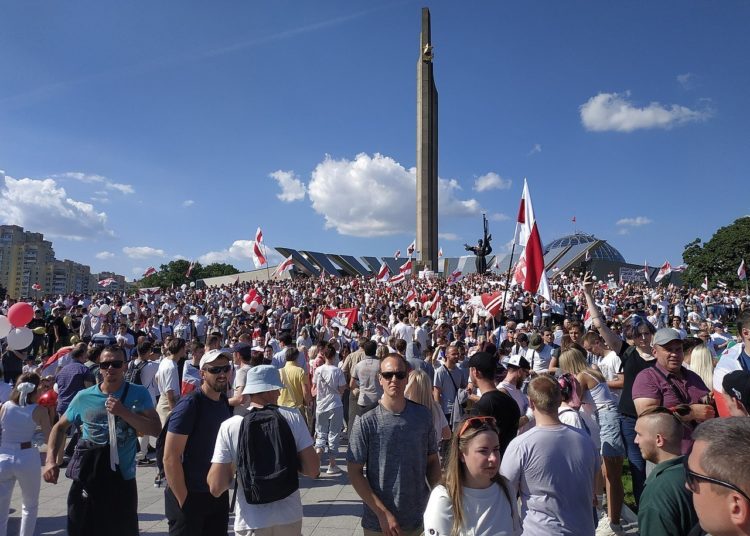 The stand-off between the official ‘winner’ of Belarus’s rigged presidential election, Aleksandr Lukashenko, and the growing coalition of opposition groups has been continuing this week in Minsk and other towns and cities throughout the country.

While the opposition leader, Svetlana Tikhanovskaya has begun to set up a broad-based coordination council to oversee a peaceful transition of power, Lukashenko has branded this “an attempted coup”. He has started to crack down hard on strikers and protesters, using security forces and the management of state enterprises to intimidate workers, both physically and psychologically, into abandoning their demands for him to go.

On Tuesday, Lukashenko publicly announced awards for 300 of his loyal security forces for their recent “impeccable service” – the violent arrests and imprisonment of 7,000 activists and bystanders at the nights of demonstrations following his re-election. On Saturday, in a webinar hosted by Another Europe, representatives from Belarus’s independent trades unions for miners, chemical workers and metalworkers explained how activists and members of strike committees are being intimidated at the 55 state enterprises where strike action is being taken. People are being arrested, and some have subsequently left the country in fear. Workers are being locked in the factories to prevent them joining the protesters in the streets. However, though many have been threatened with dismissal, the number of people joining the protesters continues to increase.

The unions’ spokespeople were not optimistic about an immediate resolution to the political crisis as the security forces and the management of state enterprises hold most of the cards. Strikers in individual factories are isolated from each other and lack coordination, and while there is a general willingness to defund the dictatorship, there is no desire to destroy the success of the enterprises and the workers’ own livelihoods. This explains why change may still be some way off.

In Lukashenko’s speeches and in the state-controlled media, the growing movement for change is being painted as the tool of foreign aggressors, especially NATO and the EU, though both organisations deny involvement. NATO forces are not gathering at the border in preparation to invade, and while the EU has agreed on sanctions, it has not yet decided on which officials and politicians to impose them. It has also offered to act as a broker between Lukashenko and the opposition to find a way to facilitate a peaceful transfer of power.

Belarus’s minister of defence, Viktor Khrenin, has wrongly been claiming that protesters have been defacing WW2 memorials. In addition, he has suggested that their adoption of the red and white flag is inspired by Nazi collaborators whereas it is, in fact, the flag of the two brief moments of comparative independence and freedom: the time of the Belarusian People’s Republic (1918–1919) and that of the immediate aftermath of the USSR (1991–1994), before Lukashenko properly established his increasingly despised regime. Such traditional Soviet propaganda is unlikely to cut much ice with today’s protesters who are mostly young, internet-savvy and far less gullible and xenophobic than previous generations. They see the social and economic progress made across the border in Poland and Lithuania and compare this with the moribund economic situation and repression of human rights, freedom of speech and alternative creativity at home.

Yesterday, (23 August), a crowd of around 150,000 gathered in Independence Square, one of Europe’s largest and the site of the country’s parliament, to demand once again Lukashenko’s resignation and a re-run of the disputed election held two weeks ago. Despite the presence of security forces in vehicles parked nearby and threats of drastic action from the minister of defence, as well as images on social media of Lukashenko watching the protests from a helicopter and clutching a Kalashnikov, those demanding change have not been deterred. As one protester had written on her placard: “I’m not a lamb, but a girl, and unlike you, I’m not hiding behind Volodya’s back”. The reference is to Putin to whom Lukashenko has appealed for help in line with existing military treaties.

Whether Volodya will actively intervene with tanks to force the people to submit to their unpopular and increasingly desperate leader, having told the west to keep out of it; whether he will drop his sometimes difficult ally in favour of another face with similar policies, but more subtlety and charm; or whether opposition forces will finally triumph through sheer force of numbers, we will have to wait to see. Much can happen in a week of Belarusian politics in August, and there is still a whole one left.