Local historian John Heywood tells the story of the sinking of the RMS Lenister in 1918, the greatest ever loss of life in the Irish Sea 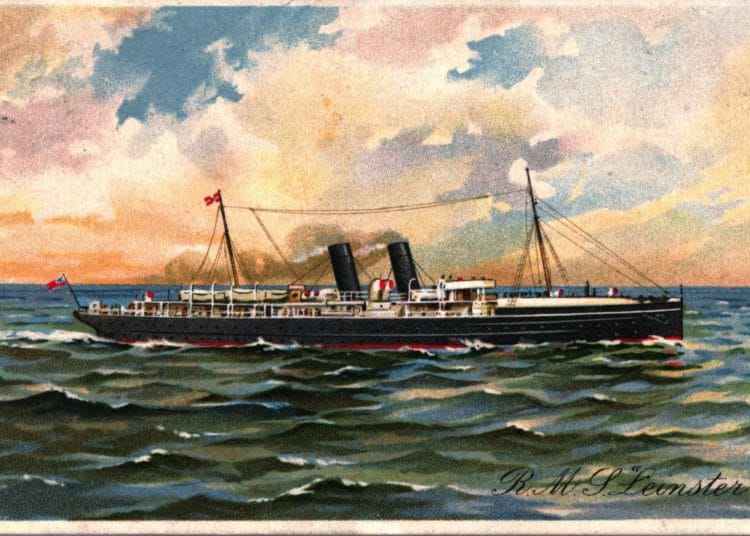 It all started when studying the World War One commemorative stained-glass window in the parish church of St Peter and St Leonard in my home village of Horbury near Wakefield. I suddenly realised that I knew virtually nothing of the fallen men whose exploits it recalled. Coupled with the fact that by this time it was 2013, and almost the one hundredth anniversary of the start of the horrendous conflict, I was determined to bring a few of their stories to light.

As such, my first book ‘Silent Witnesses – Stories of Horbury’s Fallen Heroes’ was born. I am not a military historian in any sense of the word. My intention all along was only to make some of the names that are read out once every year a little more human.

The life of Sgt Clarence

One such story is that of Sergeant Clarence Edwin McDermid (1892–1918) – and no, before researching the book I had no idea that there was such a thing as cyclists brigades.

Clarence was born in Darlington in 1892, the son of Edwin J McDermid, (manager of a wagon repair works) and his wife Florence. They had two sons Percy and Clarence and two daughters Winifred and Daisy. Upon being made manager of the Yorkshire Wagon Repair Works in the village of Horbury, Edwin and his family moved to West End Villas on Quarry Hill. Clarence found employment as a colliery draughtsman at Great Houghton Colliery. The outbreak of war however was to change the family’s comfortable and settled lives for ever.

Clarence enlisted into the army on 9 November 1914 where he joined the mounted division of the Royal Army Medical Corps. He served in the 7th Cyclist Brigade based in the seaside town of Bridlington. The posting brought romance however when he met and eventually married Janet Muriel Witty from nearby Driffield. Unfortunately, now long after their marriage, the unit was transferred with their regiment to Ireland. Not to be deterred however, Janet took the bold move to go to Ireland with him!

By October 1918, Janet’s father was dangerously ill and on the 10th of that month, she and Clarence made the ill-fated decision to return to England to visit him. The couple boarded the RMS Leinster and shortly before 9am, the vessel embarked from Carlisle Pier, Kingstown (now Dun Laoghaire). She was bound for Holyhead Anglesey, carrying 771 passengers and crew. The Leinster had a crew of 76 together with 22 postal sorters from Dublin post office working in the ship’s onboard postal sorting room. There were 180 civilian passengers, men, women, and children most of them from Britain and Ireland.

The greatest number of passengers on board, however, were service personnel. Many of them like Clarence were going on leave. As the ship set sail, the weather was fine but the sea was rough, following recent storms. Earlier that morning several Royal Navy ships had been forced to return to port due to the stormy conditions.

Shortly before 10am about 16 miles from Kingstown, a few people on the deck of the Leinster reported seeing a torpedo approaching the port side of the ship. It missed the Leinster passing in front of her. Soon afterwards, another torpedo struck her port side where the postal sorting room was located. Postal sorter John Higgins said that the torpedo exploded, blowing a hold in her port side. The explosion travelled across the ship blowing a hole in her starboard side.

To return to port, the Leinster turned 180 degrees, until she faced the direction from where she had come. With speed reduced and slowly sinking, the ship had mercifully not sustained many casualties but then another torpedo struck the ship on the starboard side almost blowing it apart. The Leinster sunk soon afterwards.

Many of those on board were killed in the explosion and the sinking of the vessel including Clarence. Amazingly, his wife Janet – after being in the water for some considerable time – was rescued. She eventually returned to England and made a full recovery. Sadly, her father died very shortly after the sinking of the Leinster, leaving her without the two most important men in her life.

Officially, 501 people died in the sinking, making it both the greatest ever loss of life in the Irish Sea and the highest ever casualty rate on an Irish owned ship. The dead are remembered at the RMS Leinster Memorial in Dun Laoghaire.